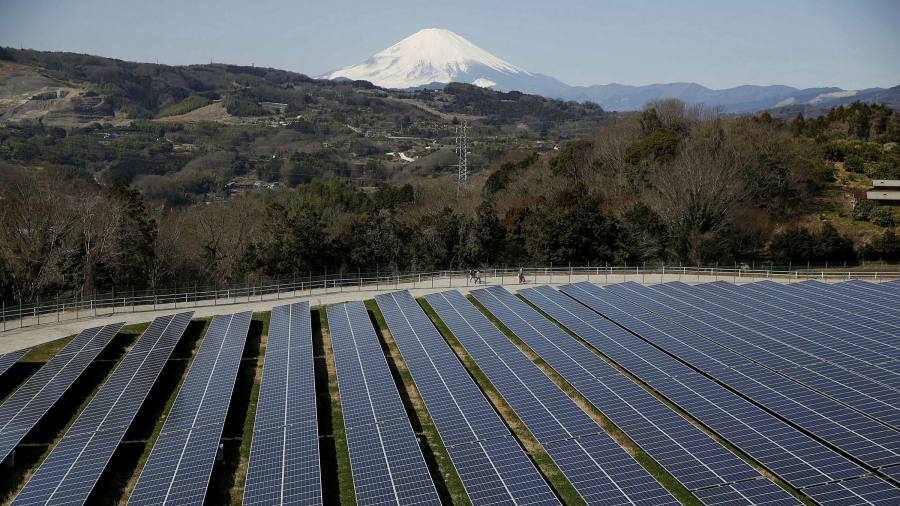 The companies on the inaugural FT-Statista Asia-Pacific Climate Leaders list are located in a region where the risks posed by climate change are especially acute.

And the Asia-Pacific region has already been feeling the effects of global warming, from 2019-20’s bushfires to flash floods in central China last year and this year’s floods in Australia.

For some of its low-lying island nations, the threat is even starker — a point made by Tuvalu’s foreign minister when he recorded a speech knee-deep in seawater for the COP26 climate summit in Glasgow.

At the same time, Asia-Pacific’s need for development has caused its carbon emissions to soar. According to data-provider Statista, these reached nearly 17bn tonnes in 2020 — more than the rest of the world combined.

However, at COP26, its two most populous countries, China and India, intervened to weaken a pledge to eliminate coal, insisting on a commitment to “phase down” rather than “phase out” its use.

But, if governments appear to be dragging their feet on climate change, the Climate Leaders list shows that some businesses are in more of a hurry.

Like its European counterpart, it identifies the companies that achieved the greatest reduction in their Scope 1 and 2 greenhouse gas (GHG) emissions intensity between 2015 and 2020.

Scope 1 and 2 emissions — “core emissions” in the table — come respectively from a company’s own operations and from generating the energy it uses, while intensity is defined as tonnes of emissions of CO₂-equivalent per $1mn of revenue. The latter metric means that, even when a company’s absolute emissions rise as its revenue grows, there may not be a commensurate rise in the intensity data.

However, for businesses whose annual core emissions exceeded 2mn tonnes, a rating of at least A- from environmental performance monitor CDP was mandatory. The editors also reserved the right to exclude companies whose broader environmental record — on non-GHG pollution, for example, or deforestation — was sufficiently disputed to undermine any claim to be a “climate leader”.

Of the 200 companies listed, the biggest cut in emissions intensity was achieved by Bank Australia, a customer-owned financial services provider in Australia.

In terms of sectors, though, technology & electronics was the best represented in the list with 29 companies, while financial services was second, with 21.

Japan was home to the most companies listed, with 89, followed by Australia, with 47, and India, with 20.

These numbers come with some significant caveats, though.

First, concerns over data accessibility and reliability mean that some countries — notably China — are excluded from the list.

Second, the intensity calculation does not factor in Scope 3 emissions — that is, those occurring along the large stretches of the value chain not covered by Scopes 1 and 2. This is because, while they typically account for most of a business’s emissions, they are not always disclosed and, even when they are, metrics vary, making comparisons hard.

Finally, as noted above, because the intensity calculation is based on emissions relative to revenue, some rapidly growing companies on the list actually increased their absolute emissions over the five-year period.

This is not to belittle the achievements of the Climate Leaders: some action is clearly better than no action. However, as levels of atmospheric CO₂ continue to hit record levels, Asia-Pacific’s leaders — both business and political — will need to do much more if their fast-developing region is not to become a victim of its own carbon-intensive success.

A print and online report on the Asia-Pacific Climate Leaders 2022 will be published on June 13, containing articles analysing the issues that this research raises.

Scroll down to the bottom of the interactive table for the full research methodology.

[3] Absolute change in GHG emissions between 2015 and 2020. Positive values reflect a reduction in emissions, negative values an increase. All the companies on the list have, however, cut their emissions intensity

[4] Scope 3 refers to indirect emissions, which can be reported for some or all of 15 categories and thus vary enormously. This is why absolute figures are left out here

[6] SBTi is a partnership between CDP, the UN Global Compact, the World Resources Institute and WWF and helps companies set targets for reducing greenhouse gas emissions

[a] Part of MC-UBS Group

[b] Part of Mahindra Group

[d] Merged with Northern Star Resources in 2021; data in this ranking refers solely to Saracen Mineral

[i] Under SG Holdings

[l] Emissions data for 2015 include partial Scope 3, which cannot be excluded

Asia-Pacific Climate Leaders 2022 is a list of 200 Asia-Pacific companies that have achieved the greatest reduction in their greenhouse gas (GHG) emissions intensity.

All Asia-Pacific companies — defined as having headquarters in one of 14 Asia-Pacific countries — with a minimum revenue of $50mn in 2020 were eligible for consideration.

A call for entries in November 2021 invited prospective participants to fill out a short questionnaire about their GHG emissions between 2015 and 2020, and their revenue over the same period (or, for banks and insurance companies, total income). Statista also conducted independent research, scrutinising data from about 4,000 companies and inviting possible candidates to register.

Although the call for entries stipulated that businesses had to be independent, this rule was relaxed to allow subsidiaries that report their emissions independently to be listed.

For businesses with a rating from the Carbon Disclosure Project (CDP), only those with a score of at least B- were considered. Companies that do not work with CDP were still eligible, but for any company annually emitting more than 2mn tonnes of CO2-equivalent, a CDP rating of at least A- was mandatory.

The editors also reserved the right to exclude companies whose broader environmental records, beyond reported Scope 1 and 2 emissions, were sufficiently disputed to undermine any claim to be a “climate leader”.

All companies for which relevant data were found — both those that registered and those independently identified — were contacted so that they could review the data. Of those, the 200 with the greatest reduction in emissions intensity have made it into the final list of Asia-Pacific Climate Leaders 2022.

Fuller information about the methodology is available from Statista. Although extensive research was carried out, the list does not claim to be complete, as some companies did not publish their figures or did not participate.