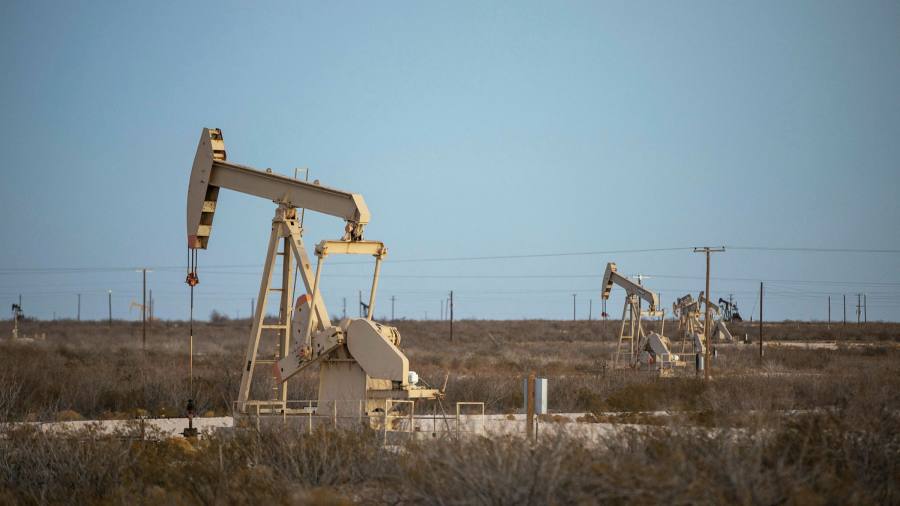 Welcome to another Thursday Energy Source.

Remember when Big Oil was holding fire on new oil supply? No longer — at least not in the Permian. Today’s first note looks at ExxonMobil’s and Chevron’s plans to increase supply in the world’s most prolific oilfield.

Our second note explains why they might want to do so. Part of it, is that Opec+ seems to have a spare capacity problem.

And as the Winter Olympics begin on Friday, if you think the skies above Beijing look clearer than usual, Data Drill offers one explanation: China has curbed production in the main steel provinces.

Last, can the people who financed the shale revolution pivot into energy transition? Maynard Holt — an investment banker who, as part of Tudor, Pickering, Holt & Co, was at the centre of the US oil surge — thinks so. Veriten, his new venture, describes itself as a “new platform for a changing energy world”. But it’s a for-profit group, not a think-tank.

“It doesn’t feel right and it isn’t working,” Holt said about the state of the energy transition now. He cited the price shocks in Europe as one example. “In some ways, we’re even going backwards. We’re using more oil, we’re using more diesel generators . . . the grid is breaking down.”

Worse, says Holt, if policymakers get the transition wrong, the populist pushback against measures to mitigate climate change could be delayed by a decade. It’s an intriguing message from one of Houston’s biggest names, now putting more money behind a hunch that energy companies want better intelligence about how a clean energy shift will play out.

All eyes on the Permian

America’s oil supermajors are promising big growth from the Permian this year. The plans are coming together just as their smaller rivals, which drove the shale oilfield’s massive expansion over the past decade, are pledging to tap the brakes.

ExxonMobil and Chevron are both putting the Permian, which spans west Texas and south-east New Mexico, at the centre of their output growth strategies and are signalling double-digit growth this year.

It will make them key drivers of growth in one of the world’s biggest oilfields. Last year their combined Permian output surpassed 1mn barrels of oil equivalent a day (a measure that captures both oil and gas) for the first time, giving them a new heft in the region after struggling to keep up with smaller, nimbler producers for years.

Exxon’s chief executive Darren Woods told analysts this week that his company added 100,000 barrels of oil equivalent in 2021. That brings output to 460,000 boe/d amid plans for another big step-up in output this year.

“Our expectation, as we go into 2022, is to grow another 25 per cent, and that’s doing that with a very tight control on capital. So that’s how we’re playing the game,” said Woods.

The forecast for another 25 per cent leap in output this year implies the supermajor will add another 115,000 boe/d this year, bringing its total to 575,000 boe/d, quickly making it one of the basin’s largest producers.

“The Permian is healthy and getting better . . . that is the largest piece of what we would anticipate in terms of production growth next year,” said Wirth. “Spending this year [will be] up from $2bn to $3bn.”

However, Wirth insisted the company would not be tempted to accelerate that growth further if oil prices continue to rise, as many analysts expect.

“That is a meaningful step-up in activity, and we want to execute that well. And so I don’t think we’re going to be tempted by the price of the day to put that at risk by doing more,” said Wirth.

The supermajors’ big ramp-up in the Permian comes just as its shale producing rivals, including ConocoPhillips, Pioneer Natural Resources and Diamondback Energy, are promising to keep a tight hold on growth.

Scott Sheffield, chief executive of Pioneer Natural Resources, the Permian’s largest producer, has promised to keep any growth limited to low single digits. He told us in December that “there’s no way that the industry is going to change overnight and start growing again”.

The Permian’s oil output is at an all-time high of around 5mn barrels a day, having recovered from a sharp drop during the pandemic-driven downturn, according to the Energy Information Administration. As the last big shale oilfield still capable of fast growth, it is increasingly important to the US’ oil supply outlook. It has also become a bastion of growth for Big Oil. (Justin Jacobs)

Does Opec+ have enough oil?

Forget Opec+’s scheduled supply increases, which will continue in March at the monthly pace of 400,000 barrels a day. These nominal quota increases are now almost irrelevant to a bullish oil market. What matters is actual supply. And Opec+ is producing much less than it promised, prompting a gnawing fear that the group’s capacity is not nearly as great as thought.

Alongside the recovery of oil demand and under-investment by other oil producers, this might explain why so many of you are so bullish with your maximum crude price forecast. (You can still vote.)

Meanwhile, the International Energy Agency reckons the group is now underproducing its pledge to the tune of almost 800,000 b/d. This isn’t deliberate: at $90 a barrel, producers have every incentive to maximise output.

Several medium sized and smaller Opec+ producers appear to be struggling; Angola, Nigeria, Equatorial Guinea, Azerbaijan, and others are all producing significantly below their quotas. More significant, supply from Russia, the world’s third-biggest producer, is nearing what some analysts think is a much diminished upper limit.

Pricing firm Platts reckons Russia has about 500,000 b/d of capacity available and if it continues to lift supply in line with its Opec+ commitments, it would run out in the second quarter. Goldman Sachs says Opec+ itself could be caught short by then.

The bearish response is that if $90 oil prices linger, US supply could rise more quickly than expected. A deal with Iran would unleash more oil too. And rising interest rates could slow economies and cool the recovery in oil demand.

But the number of Opec+ countries that have idle productive capacity still available, say analysts, can now be counted on two fingers: Saudi Arabia (now producing 10mn b/d) and the UAE (2.9mn), and both are already close to the upper limit at which they sustained production in the past.

Total Opec spare capacity — always a key metric for the market — is currently measured by the IEA at 6m barrels a day. But many Opec-watchers are sceptical.

“Opec sustainable spare capacity is only half that number. The cupboard is looking bare,” says Bill Farren-Price, an Opec expert at consultancy Enverus.

The implications of this are deeply bullish for the market. Global demand continues to rise, dispelling notions that the pandemic had induced a peak in how much oil the world burns. Meanwhile, production from the US — in recent years the source of new supply that offset shortages — is still well below its peak.

Opec believes demand for its oil in 2022 will be about 1mn b/d higher than last year. But if Russia continues to underproduce its Opec+ quota — or conflict and sanctions curtail its exports — and US oil producers keep to their capital discipline pledges, Saudi Arabia and the UAE will have to produce even more. Or demand will have to fall. Bullish traders are licking their chops. (Derek Brower)

The Winter Olympics kicks off tomorrow and Beijing is working hard to achieve “blue skies”. Production for key metals like steel is down as China cracks down on air quality before the Games, according to a new analysis by S&P Global Market Intelligence.

Beijing extended its annual anti-pollution orders in October 2021 to 64 cities, more than double the number of cities in recent years. Big industrial hubs were forced to reduce operations, with steel production in the fourth quarter down 11.3 per cent year-over-year, according to S&P. Production for zinc, aluminium, and lithium carbonate have also declined.

Curbing production is a tried and tested way to temporarily turn Beijing’s smoggy skies blue. In 2008, China shut down hundreds of factories for the Summer Olympics before boosting production (and pollution) back up after the Games.

China, the world’s largest steel producer, reached record high levels of steel production in 2020. While the Olympic restrictions are temporary, S&P points to the country’s decarbonisation goals and energy crisis as factors that will have a more long-lasting effect on industrial metal production. (Amanda Chu)