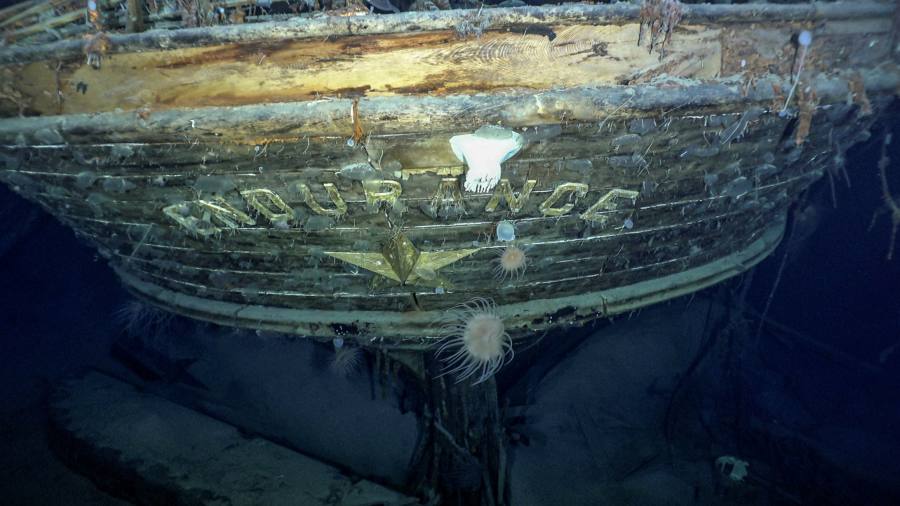 Sir Ernest Shackleton’s ship Endurance has been discovered in deep water off the Antarctic coast more than a century after it was abandoned on his doomed expedition to traverse the continent via the South Pole.

The vessel, described by the exploration director as the “finest wooden shipwreck I’ve ever seen”, was found 3,000 metres underwater in the Weddell Sea, roughly four nautical miles from the position originally recorded by Shackleton’s crew before it sunk in November 1915.

Scientists said the remarkably well-preserved vessel — with “Endurance” clearly arced across the stern — remained largely intact because of the coldness of the water and absence of wood-eating fauna.

The effort to find the fabled ship was undertaken by a UK-led team at a cost of more than £7mn and coincided with the centenary of Shackleton’s death.

“We have made polar history with the discovery of Endurance and successfully completed the world’s most challenging shipwreck search,” said John Shears, the expedition leader.

The wreck was located over the weekend using a remote-controlled underwater vehicle and the discovery was confirmed in a statement on Wednesday by the search expedition, Endurance22, and ​​the Falklands Maritime Heritage Trust. The crew travelled to the wreck site aboard a South African-owned icebreaker Agulhas II.

“This is by far the finest wooden shipwreck I’ve ever seen. It’s upright, well proud of the seabed, intact and in a brilliant state of preservation,” said Mensun Bound, the exploration director.

He added that the detailed records of Frank Worsley, who captained Shackleton’s expedition, had proved to be “invaluable in our quest to locate the wreck”.

The Endurance was immortalised in images taken by Shackleton’s photographer, Frank Hurley, which showed the ship succumbing to the force of the sea ice.

The failed expedition turned into an epic tale of survival after Shackleton and his 27-strong expedition team spent nine months stranded on a polar ice floe before undertaking an 800-mile boat journey across the open sea to find land on South Georgia Island.

Shackleton himself described the remote site where the ship sunk as “the worst portion of the worst sea in the world”.

A precise 3D model of Endurance will now be made after the vessel was scanned using laser technology, but the ship will remain untouched on the seabed under the terms of the Antarctic Treaty.

Dan Snow, the television historian who accompanied the search expedition, told the Financial Times that the scans were accurate to the nearest centimetre, picking up small details such as “crockery and an old boot on the deck”.

He said that while Shackleton’s diary described “the ice closing over [Endurance] in a very final sense”, science had allowed the telling of a “new chapter” for the ship.

“They could never have imagined over 100 years later that the technology would exist to go down to the seabed,” Snow added.

Shears said his team had undertaken important scientific research in the area “that directly affects the global climate and environment”.

Stefanie Arndt, a sea ice physicist at Germany’s Alfred Wegener Institute who was part of the search expedition, wrote on Twitter that she had been able to take more than 600 snow and ice samples, which she called “an incredible number”.