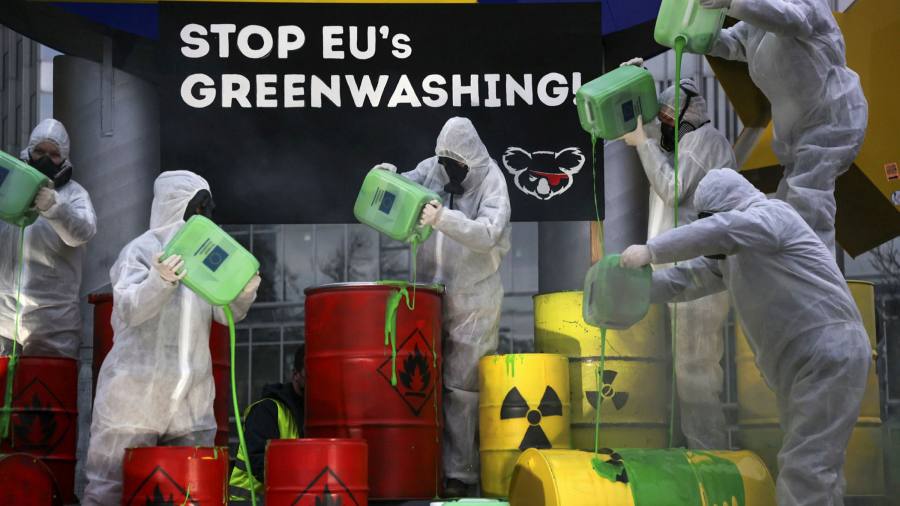 The EU’s long-awaited final text on the so-called taxonomy for what is considered a green investment (nuclear and gas included) is set to be published today. We’ll look at why all the opposition to the text hasn’t made much of a difference, and what are the next steps.

Meanwhile, on the eastern front, Russia’s president Vladimir Putin dug his heels in yesterday, accusing western powers of ignoring his demands and dragging his country into war with Ukraine. Next door in Kyiv, the procession of western officials continued, with the prime ministers of the Netherlands, Poland and the UK all meeting with Ukraine’s president yesterday to show support.

Switching gears, remember the idea — floated last year — of having an EU-wide digital wallet for personal, medical or official records? We’ll explore why it’s off to a rather bad start.

This article is an on-site version of our Europe Express newsletter. Sign up here to get the newsletter sent straight to your inbox every weekday morning

The gas is greener

The European Commission will this afternoon publish the final version of its taxonomy on sustainable finance, which has been heavily criticised for classifying nuclear power and some forms of natural gas as green energy sources.

Today’s publication is the penultimate step in a taxonomy process that has been littered with complaints from environmental groups, some EU governments and even the European Investment Bank. Green experts, MEPs and governments, including those of Austria, the Netherlands, Spain, Luxembourg and Denmark, as well as Germany’s Greens, have all called for the commission to exclude natural gas from the green label.

Their calls are likely to fall on deaf ears. Mairead McGuinness, EU commissioner for financial services, has said there will be no major changes from an initial draft that the Financial Times first reported on New Year’s Eve.

The classification of fossil gas and nuclear power will be largely unchanged, but officials have told Europe Express there will still be some tweaks to watch out for. One of them includes removing targets for the blending of gas with renewables for 2026 and 2030 to qualify for the green label. In theory, that will make it easier for gas to be considered a sustainable investment.

One key demands from anti-gas campaigners will not make it into the final text. This is a call for the inclusion of gas only if it emits less than 100g of CO2 per kilowatt hour of power and is used to replace more polluting sources such as coal. An initial designation of 270g will remain.

Amid the outcry, expect the commission to put up a staunch defence of the rules at a press conference this afternoon. Brussels is also well aware that despite the complaints and even threats of legal action, there is no super majority of member states to reject the taxonomy outright.

That leaves the European parliament as the only institution that can still stop the taxonomy in its tracks. MEPs would need to find a majority — 353 votes — to veto the rules and force the commission to go back to the drawing board. Anti-taxonomy MEPs are already rallying their troops.

A rejection would be an embarrassing blow for the commission that has flaunted the taxonomy as a trailblazing green financial regulation that will create a “green gold standard” for the rest of the world to follow.

Even if MEPs can’t veto the rules, investors may still shun the standard if they think it offers the greenwashing it was designed to eliminate. Should markets choose to comply with more rigorous alternatives — such as those being devised in the UK or the US — the EU’s green taxonomy will have failed on its own terms.

Unemployment in the eurozone fell to a record low of 7 per cent at the end of last year, underlining how the region’s labour market has bounced back much faster than expected from the impact of the pandemic. (More here)

Last summer, the EU unveiled plans for a digital wallet so that citizens could have access to services online, but some member states are starting to think it might not be a good idea after all, writes Javier Espinoza in Brussels.

The project was supposed to allow EU citizens to securely store payment details and passwords and log into local government sites to pay bills with a single sign-on, recognised across the bloc. The proposals are non-binding and allow member states to implement them as they see fit.

But some countries, including Ireland and Denmark, are starting to have reservations about the plans.

A letter signed by 14 member states outlines their fears. These are twofold:

When you work from a standard that is your benchmark and if that standard is set in a vibrant, democratic market economy, you get one [global] standard that will work

Are you enjoying Europe Express? Sign up here to have it delivered straight to your inbox every workday at 7am CET. Do tell us what you think, we love to hear from you: [email protected].