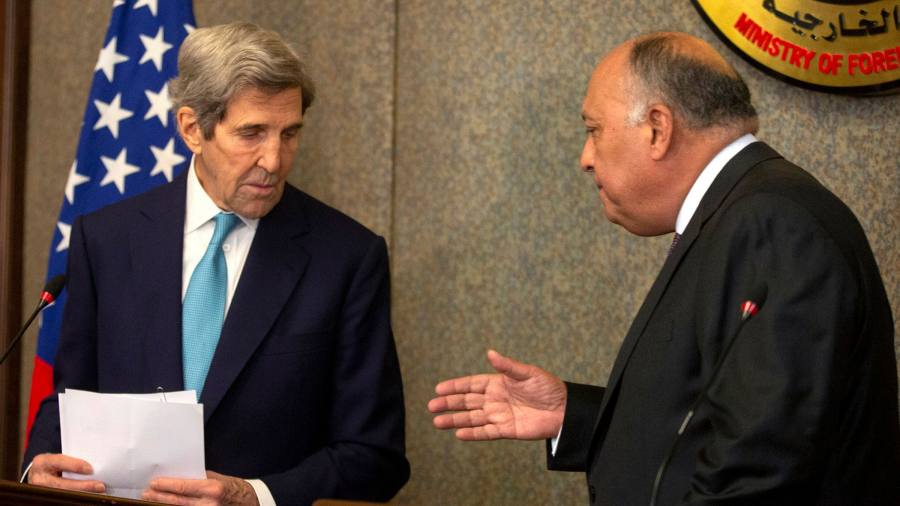 A fight over compensation for loss and damage suffered by countries affected by climate change is building ahead of the COP27 UN global summit in Egypt, as African climate and economic experts criticised the US climate envoy John Kerry for not taking the issue seriously.

Speaking in Egypt on Monday, Kerry stressed the urgent need for national commitments to be delivered to limit global warming, but made only a passing reference to the issue of loss and damage.

Kerry was also cited as saying recently that focus on a loss and damage facility “could delay our ability to do the most important thing of all, which is [to] achieve mitigation sufficient to reduce the level of adaptation.”

At a briefing on Africa’s agenda for COP27 on Monday, Tasneem Essop, executive director of Climate Action Network, representing more than 1,500 global civil society groups, said Kerry “clearly doesn’t get loss and damage, because loss and damage is beyond adaptation.”

Rich nations must be prepared for vulnerable countries to raise the issue at COP27, she added. “This is not an insurance issue, this is a compensation issue, it is a climate justice issue, and John Kerry has to actually get with it.”

The matter proved divisive at Glasgow’s COP26 summit last year, after rich nations rejected a proposal by the world’s poorest countries to create a new loss and damage funding facility.

The pressure on developed countries to respond to the destruction caused by extreme weather owing to climate change will be thrown further into focus next week, when the world’s top climate scientists publish a landmark UN report about adapting to global warming.

Jean Paul Adam, a United Nations Economic Commission for Africa director and former Seychelles cabinet minister, said on Monday: “Loss and damage financing is for dealing with the fact, which is evident, that people are losing their lives daily.”

Investing in climate adaptation would reduce the costs of loss and damage over time, Adam agreed. “But you can’t avoid the fact that if loss and damage is happening, these people are currently not receiving support.”

The failure to agree to funding at COP26 was singled out as one of the main disappointments of the summit by developing nations.

Countries agreed instead to start a “dialogue” on the issue, and to fund the operation of the so-called Santiago network, a UN group that will publish information about how affected countries can access finance.

Alex Scott, from independent climate think-tank E3G, said the question of how to deploy money to help with the devastation wrought by extreme weather was one of the “big agendas” for the year.

“There’s definitely a need for some bigger solutions to be put on the table this year, we wont be able to wait for . . . the formal [UN] dialogue to play out,” said Scott. The UK, which retains the COP presidency until November’s summit, and Egypt “will need to help bring together on the stage at COP27 some more options.”

Germany has put the issue on the G7 agenda this year, as the holder of the presidency. Annalena Baerbock, foreign minister and joint leader of the Green party, has also recruited the head of Greenpeace, Jennifer Morgan, as special envoy for climate. Its programme of work will include “enhanced co-operation with the most vulnerable countries on adapting to climate change and the approach to climate-related loss and damage.”