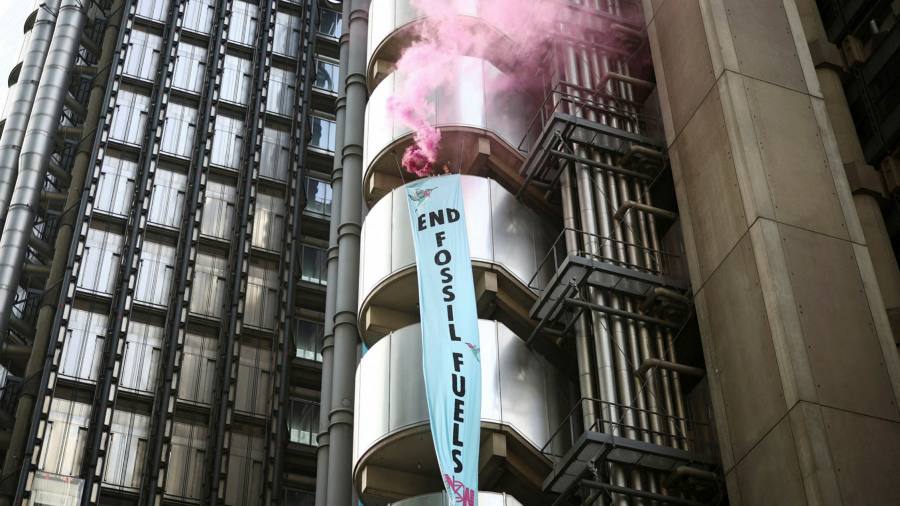 Lloyd’s of London, the world’s largest insurance marketplace, was forced to shut its headquarters on Tuesday and shift to remote trading after a group of climate activists barricaded one of the City’s best-known buildings.

Climate group Extinction Rebellion, which has targeted banks and the Bank of England in previous protests over the financing of the fossil fuel industry, said it was the first time it had compelled a financial institution to close its doors.

The effort to blockade the headquarters on London’s Lime St began early on Tuesday as about 60 activists blocked entrances, stuck up posters and unfurled a banner saying “End fossil fuels now”. City of London Police said its officers were at the scene.

Lloyd’s, which specialises in insuring big, complex risks including in the energy sector, has faced a string of protests from environmental campaigners. Extinction Rebellion activists last year dumped a pile of fake coal outside the Richard Rogers-designed building.

Lloyd’s said in statement that “in the interests of our people’s safety, we have advised corporation employees and market participants not to come to the building today”. It added that “the market remains open and trading is continuing online using our remote capabilities”.

Extinction Rebellion highlighted Canada’s controversial Trans Mountain pipeline as a carbon-intensive project that it believed was being supported by Lloyd’s. Filings show that syndicates within the market insured the pipeline as recently as 2020. The following year, Canada’s energy regulator decided to redact the names of its insurers in public filings, amid growing pressure.

Campaigners have accused Lloyd’s of watering down its climate pledges. Lloyd’s said in late 2020 it would ask insurers within the market to stop providing policies that cover carbon-intensive energy sources such as thermal coal and oil sands, effective from 2022, and to phase out existing coverage by 2030.

But in 2021, Lloyd’s issued guidance to the market saying it was not “mandating the exclusion of these policies”. “It is up to each individual managing agent to decide their own ESG targets and policy, including their approach to sustainable underwriting,” it wrote.

Lloyd’s said on Tuesday it “supports safe and constructive engagement on climate change and we’re continuing to work to support a responsible transition”.

The market has grown used to periods of remote working during the pandemic, with some insurance companies reluctant to return to face-to-face trading in the multi-floor “underwriting room” at Lime St. It said last month that the number of market participants going to the building was at about half pre-pandemic levels.