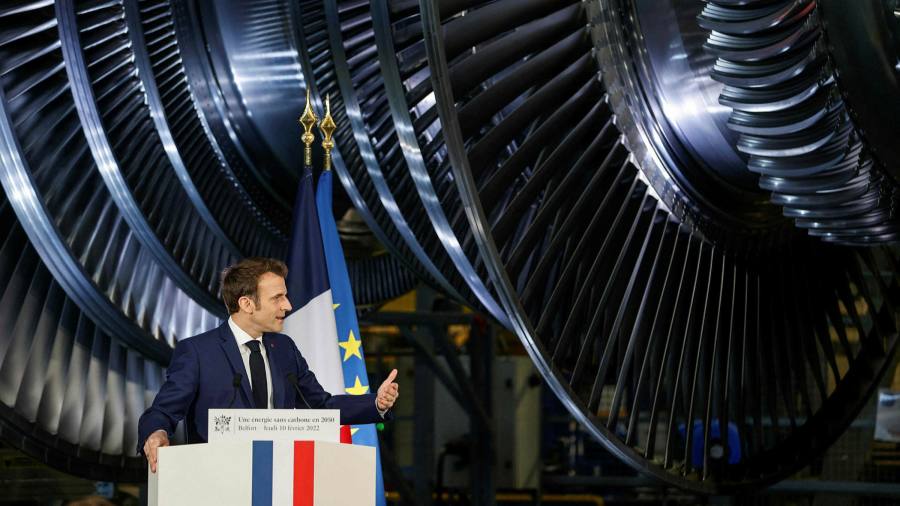 Speaking in Belfort, eastern France, about measures to meet net zero carbon emissions by 2050, the French president said that state-controlled utility EDF will build and operate the new reactors, which will be advanced versions of the European Pressurised Reactor. The cost is estimated at about €50bn, depending on financing conditions, according to EDF.

In addition to building new reactors, Macron also said France would investigate ways to extend the 40-year lifecycle of existing ones to more than 50 years. France has 56 reactors in operation.

“We need to pick up the mantle of France’s big nuclear adventure again,” Macron said.

The investment plan strengthens France’s commitment to nuclear power, which now produces some 70 per cent of the country’s electricity and has been a symbol of its industrial prowess. It is a significant policy shift for the French president, who while a supporter of France’s atomic power industry, closed one ageing plant in 2020 and had promised to reduce the share of nuclear electricity in France’s energy mix.

The state, which holds a 84 per cent stake in EDF, will provide financing for the projects as EDF is heavily indebted and facing cost overruns on new nuclear plants in France and Britain. Macron did not provide details but said “the state would act responsibly to ensure the financial stability” of state owned utility.

Construction is scheduled to start in 2028 and the first new reactor would come online by 2035. Studies would be undertaken to consider a further eight reactors, the president said.

The announcements come just two months before presidential elections, in a campaign that has been marked by higher energy prices and clashes between candidates over the pace at which France should roll out renewable energy investments.

Europe’s last major nuclear power producer, France has so far been shielded from the worst of a fallout from soaring gas prices, adding to the sector’s appeal. Meanwhile Brussels recently stuck to plans to label nuclear energy as “green”, helping to make it more attractive to investors.

Macron added that France would also need to develop renewable energy projects at a faster pace, in areas such as solar or wind power. But he said it was unrealistic for France to rely solely on renewables and would continue to need nuclear.

On the renewable front, France will aim to increase its solar power capacity tenfold by 2050 and target building 50 offshore wind farms up from none now. Its first offshore wind project is due to go online this year.