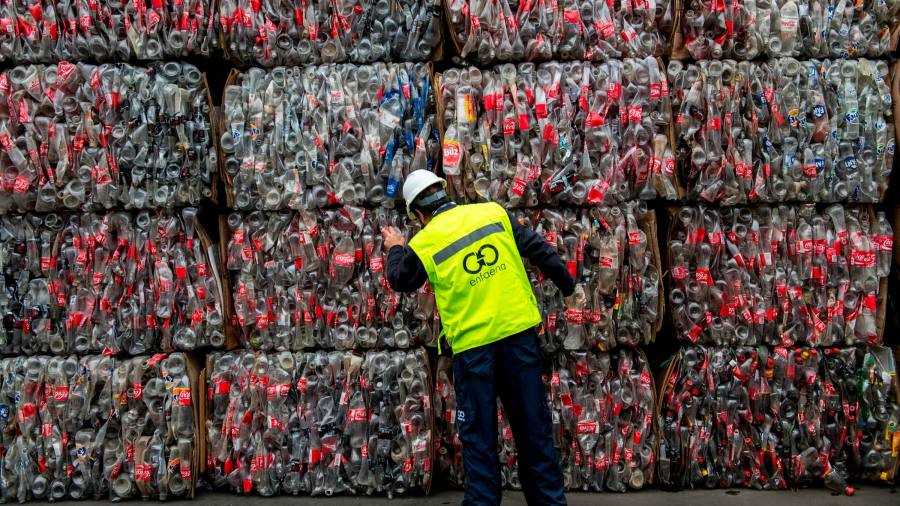 Prices for the most common type of recycled plastic have doubled in a year to hit fresh records as companies vie for limited supplies, threatening ambitious targets set out by drinks and consumer goods groups.

The cost of flakes of post-consumer polyethylene terephthalate (PET) in Europe have shot up 103 per cent to €1,690 a tonne since January 2021, according to data group ICIS, after household goods, food, drinks and garment makers adopted fresh recycled plastic usage targets.

Prices for bales of used bottles, which are used to make the flakes, have risen even faster, more than tripling since January 2021. US prices for recycled plastic have also soared, ICIS added.

The cost of recycled PET last week overtook that for the virgin equivalent, as demand for the post-consumer product outweighed the impact of surging fossil fuel prices on the cost of newly-made plastic.

Drinks makers have been in the spotlight over single-use plastics — particularly since David Attenborough’s 2017 documentary Blue Planet II showed millions of viewers the impact of plastic pollution. Their bottles are also the main feedstock for recycled PET.

Groups including Coca-Cola, PepsiCo, Nestlé, Keurig Dr Pepper and Danone are all targeting at least 25 per cent or more post-consumer recycled content in their packaging by 2025, a target mandated for bottles by the EU. Some have much higher targets.

Helen McGeough, senior analyst for plastics recycling at ICIS, said high prices and limited supply were slowing companies’ efforts. “Projects are going on hold and the ramping up [of recycled plastics use] has really slowed — that’s what we are hearing from suppliers.”

Sue Garrard, a sustainability consultant, said: “Supply of recycled PET doesn’t anything like match the demand because the recycling industry can’t scale fast enough even with the strong buying signals created by [companies’] targets.”

Three industry groups for non-alcoholic drinks makers last month called on the European Commission to give them access to recycled bottles ahead of other sectors such as clothing.

Nestlé, which makes bottled water brands including Perrier, said: “In order to achieve full circularity for PET bottles, we need to increase the amount collected for recycling as well as ensure that the collected material is used to produce new bottles again in a closed loop, with priority access to the materials given to beverage producers.”

Jim Andrew, chief sustainability officer at PepsiCo, said the company was pushing ahead with goals including moving “key Pepsi-branded products” in 11 European markets to 100 per cent recycled plastic this year.

“We’re striving to make 100 per cent of our packaging able to be recycled, composted or reused by 2025. We know that reclaiming this material and increasing the availability of [recycled] PET requires infrastructure improvements and smart policies,” he said.

Several European countries are looking to introduce deposit return schemes for used bottles, while some, such as Germany, already have them. Countries including the UK are also introducing extended producer responsibility, which forces companies to fund recycling services handling their packaging waste.

But Garrard warned the potential of such schemes was limited by narrow margins in the sector. “The question is, how far can the circular economy principles go when you are looking at solving a packaging problem and a lot of that packaging inherently is subservient to a high-volume, low-margin market?” she said.

Sander Defruyt, who leads the New Plastics Economy initiative at the Ellen MacArthur Foundation, said pushing up recycled content in drinks and other packaging would “get harder year by year” but that recent progress had been “unprecedented and much higher than in previous years”.