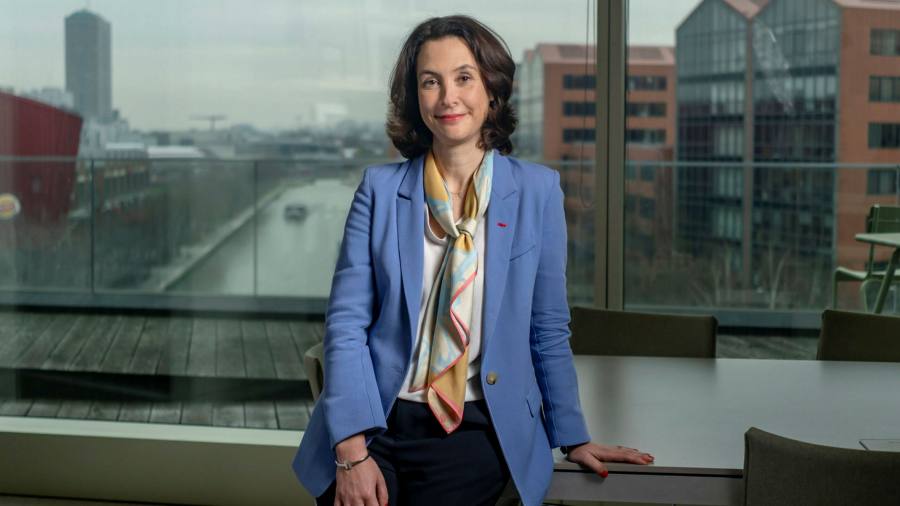 Estelle Brachlianoff, incoming chief executive of French utility group Veolia, has a desk in her office where she displays an unusual selection of corporate mementos.

They include a milk bottle made from recycled plastic and two little vials containing palladium powder and platinum pellets, often used in catalytic converters to help carmakers reduce carbon emissions.

They are products Veolia has developed or extracted with novel recycling methods that Brachlianoff shows off as innovations that have transformed the water and waste management industry as it tries to tackle climate change.

For Brachlianoff, appointed this week as new boss of the utility company from July, advances like these will be core to motivating staff after an acrimonious battle for control of Suez, a rival in the French water industry since the 19th century, that descended into the courts.

“Our first mission is to sweep [former Suez staff] up in our project, in our enthusiasm,” she said in an interview at Veolia’s headquarters on the outskirts of Paris, where the company is located near more glamorous groups such as Chanel, the French luxury fashion house.

Brachlianoff, 49, is polished and poised and at her most enthusiastic when discussing innovations needed to help companies improve their environmental records and recycle waste once deemed unrecyclable, as befits her training as an engineer.

Her appointment after 17 years at the company also marks a broader milestone in France, where she is only the second woman to become chief executive at a CAC 40 company, alongside Catherine MacGregor at the energy group Engie.

“It’s a topic we will all need to make progress on,” she said, adding that she favoured mentoring projects within Veolia as one means of helping women climb the career ladder.

A graduate of France’s elite École Polytechnique school, Brachlianoff, whose mother was also an engineer and the first female one at her company, cut her teeth at Veolia when she ran its British business from 2012 to 2018.

But it was the Suez saga that was decisive in turning her into the obvious candidate to be chief executive, a person who was closely involved in the discussions said.

As number two to chair and chief executive Antoine Frérot, she was a formidable adversary and a steely operator, said another person who also crossed paths with her during the takeover tussle.

“The merger talks are really when she gained in standing, working on the industrial plan and on antitrust issues,” the first person added. She showed determination in the discussions, working around the clock and helping Veolia clinch the deal with a hard-nosed approach, all attributes to lead the group although she might have to develop a more compromising edge as chief executive, they said.

“It was always going to have to be someone internal [to take over as chief executive],” the person continued, as a top priority for the group was integrating Suez and Veolia before taking on other strategic considerations such as whether the company should pivot into areas such as energy.

Axel Dumas, the chief executive of luxury handbag maker Hermès where Brachlianoff is a board member, told the Financial Times her appointment was “uplifting”. She is an executive with a strong vision who combines “empathy with stamina”, he added.

Veolia pounced on Suez in mid-2020, first snapping up a 29.9 per cent stake in the group. That preceded six months of bitter wrangling as Suez managers tried to fend off a takeover.

A deal worth nearly €13bn was finally reached last April, which will involve spinning out some Suez assets into a separate entity, largely its French water business that would have posed competition problems and employs 50,000 people in the country.

The enlarged Veolia group will have €37bn in revenues and a global workforce of 230,000, as well as a leading market share, albeit of only 5 per cent, in the water and waste management industry.

Frérot will stay on as chair, but said that he wanted to time the CEO succession after 10 years in the job to coincide with the post-merger “new adventure”.

Brachlianoff now has to contend with an antitrust examination in the UK, where potential asset sales are not ruled out.

Elsewhere, integration will begin this month, with workers looking for pointers on planned investments in research and development and potential budget increases, said Florencio Martin, a representative of the CGT union at Veolia.

On the integration, Brachlianoff is upbeat, stressing that many Suez workers had asked to join Veolia, even though some had initially been part of the spin-off plan.

The main priority would be to get existing teams to work together, then figure out strengths to propel innovations, including in areas such as agriculture water treatment and organic fertilisers where the two companies had complementary expertise, she said.

“You really feel like these teams want nothing more now than to get talking,” she added. “The first thing we will do and that I’m going to do is that, [so that] we benefit from the innovation the tie-up with Suez will bring.”