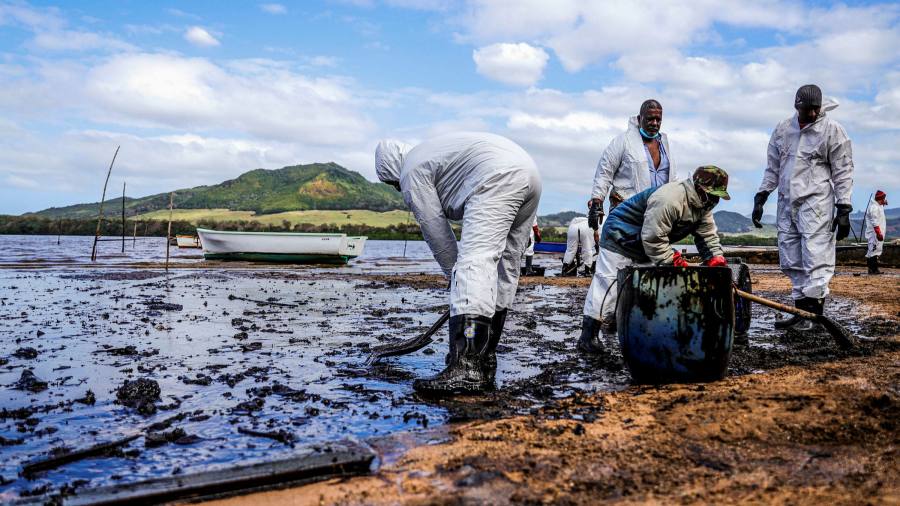 In August 2020, thousands of people — some estimates went as high as 100,000 — marched through the streets of Port Louis, the Mauritian capital. It was a remarkable turnout for an island with a population of less than 1.3mn.

One of many placards carried by protesters read: “I’ve seen better cabinets at Ikea.” But the crowds had not turned out for a narrowly political cause. Animating them were matters ecological.

A month before, on the afternoon of July 25, the MV Wakashio, a Japanese-owned, Panama-flagged bulk carrier, had run aground on a coral reef about a mile offshore.

A little under a fortnight later, the ship, which had 3,900 tonnes of fuel oil on board, began to leak its contents into the ocean. Although the authorities had siphoned off some of the oil, approximately 1,000 tonnes spread along 15km of what is an internationally recognised biodiversity hotspot.

Mauritian waters contain 1,700 species, including 786 kinds of fish, 17 of marine mammals and two of turtles, according to the Convention on Biodiversity Diversity.

Gangs of volunteers quickly mobilised. They made improvised booms to protect the coastline, using materials including sugar cane leaves, empty bottles, and even human hair. Wildlife threatened by the spill included an endangered pink pigeon, endemic to the island, and dolphins, some of which washed up on the coastline in subsequent days.

Although much of the oil was kept away from the shore, it still blackened beaches, coated rocks and damaged lagoons, rare sea grasses and mangroves. Fish in the affected area were found with high levels of arsenic, which prevented local fishermen from selling their catch. Two weeks after the initial accident, the government declared a national emergency.

The incident highlighted something essential about Mauritius: its delicate ecosystem is central to its wellbeing. Nearly 40 per cent of plants and 80 per cent of non-marine birds and reptiles are endemic. But only 2 per cent of the island, vast tracts of which were turned over to sugar production in the 19th century, is native forest. And its wetlands are under pressure from tourism.

“The cultural identity of Mauritians is strongly tied to the sea,” wrote Khalil Cassimally, a prominent environmental campaigner, at the time of the Wakashio oil spill. “We are taught early in school that Mauritius is born of the sea — a powerful volcano erupted millions of years ago creating a small island in a vast expanse of blue.”

Climate change also threatens Mauritius in various ways, though its own carbon emissions are insignificant. The rising ocean has reduced some beach areas and sand bags have been placed on a few stretches to combat coastal erosion.

“There is a growing consciousness about the needs of environment,” comments Sheila Bunwaree, an academic and campaigner.

The government says it did all it could to minimise the damage from the oil spill. “It was very well managed and we have to thank other states who helped us with the clean-up,” says Arvind Bundhun, director of the tourism promotion authority — referring to teams from France, Japan, the UK and the UN, among others.

“Today, there’s absolutely no trace of the spill any more,” he says, adding that the accident occurred in the south-east of the island, well away from most of the big tourist resorts.

Chris Reddy, a senior scientist at the Woods Hole Oceanographic Institution, Massachusetts, says his analysis suggests the spillage from the Wakashio was low-sulphur fuel oil, meaning it probably dissipated quickly. “It was a relatively small amount of oil,” he says, suggesting that the long-term impact could be limited.

Demonstrators in Port Louis suspect otherwise, though. They accuse the government of dithering in its response and of being less than transparent about the extent of the damage.

“This was the biggest ecological disaster in our history,” says Ameenah Gurib-Fakim, a biodiversity expert and former president of Mauritius. “We still do not know the impact on our marine flora and fauna,” she says. “There’s never been a proper scientific survey.”

More stories from this report

Gurib-Fakim says the island’s radar system was found wanting. Even in recent months, other ships have gone aground in stormy weather, she says, suggesting the Wakashio may not have been a freak incident.

The accident has highlighted the need to manage the island’s resources for both economic return and sustainability, says Ravin Dajee, managing director of Absa Bank, Mauritius. “Wakashio was a great blow to us. There has been a lot of learning around this, especially in terms of crisis management.”

Illustrating the point, he draws attention to Mauritius’ exclusive economic zone of 2.3mn square km — the vast ocean part of which is viewed by the island as crucial to its further economic development. “We need the right balance between developing the country and an environmental strategy that makes sense,” Dajee says.

“How do we protect our patrimony? Given that tourism is a big part of our economy, we need to do what it takes to protect our environment and the whole ecosystem to make sure that it is sustainable,” he argues.

As for the much-heralded Mauritian blue economy — a concept that spans anything from deep-sea mining and sustainable fishing to tourism and selling blue conservation bonds — Dajee says: “I hope we get our act together soon to make it a real pillar of the economy.”