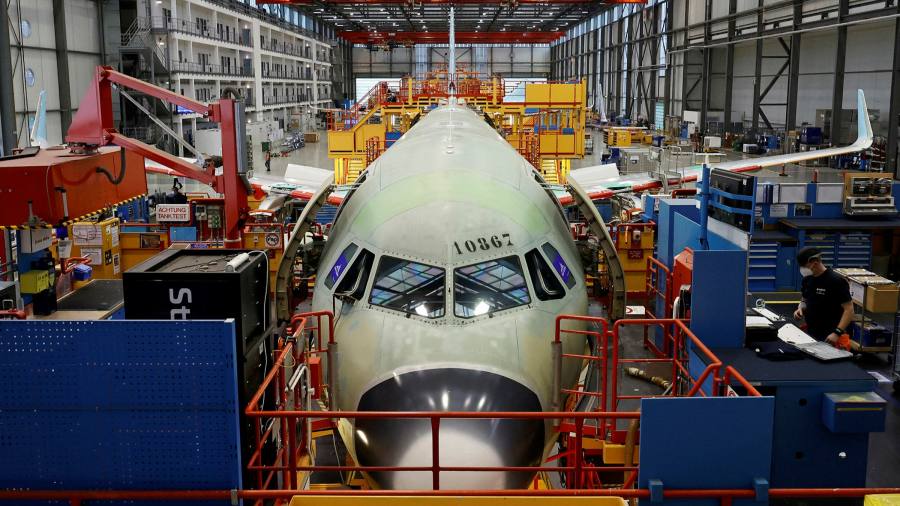 The decision by Airbus to boost jet production is one of the strongest signals yet that the aviation industry is recovering from the pandemic — but it will be a key test on the health of its supply chain.

For an industry still recovering from the Covid-19 crisis, China’s lockdown disrupting supplies of goods and materials and inflationary pressures forcing up costs, the ramp-up in production comes at a critical time.

It is also a significant industrial and logistical challenge. Each Airbus aircraft is made up of roughly 3mn parts and the company receives more than 1.7mn every day at its plants across the world from roughly 3,000 suppliers for all of its civil programmes.

But the European manufacturer, whose A320 family of aircraft dominates the market for single-aisle aircraft, is confident it can meet its bold pledge to raise production by 50 per cent to 75 planes a month by 2025 and move to a rate of 65 by next summer.

It says there is demand for new narrow-body jets as airlines renew their fleets after the pandemic and that it will be able to meet the higher rates by adding production capacity at its existing industrial sites, including the building of a second final assembly line at its US operations in Mobile.

Stepping up production will require a careful balancing act between meeting resurgent demand for new, more energy efficient planes from airlines under pressure to reduce carbon emissions, while ensuring thousands of suppliers can deliver after cut backs during the crisis.

In addition, concerns over the availability of raw materials such as aluminium and titanium following the war in Ukraine and a shortage of skilled workers risk further strains.

Dominik Asam, chief financial officer at Airbus, admits that “right now there is tremendous pressure on the supply chain. Everything is tight”.

Worries over the bold production targets have already been raised, with aircraft lessors warning the supply chain was fragile as they pushed back against the higher rates when Airbus first floated them last year.

Although the company last month secured an extension to vital engine supply contracts, this was only until 2024. Some industry executives fear risks still remain.

John Plueger, chief executive of aircraft lessor Air Lease and one of Airbus’s biggest customers, told the Financial Times in a recent interview that he believed there is “significant risk going to 75 a month despite the demand”.

“All of our single-aisle A321 and A320neo aircraft this year are already delayed from one to four months. In addition to supply constraints and labour . . . we always remain focused on quality in the production process and taking delivery.”

Airbus said it had made “some adjustments in view of the current environment for a variety of reasons” but added that it was still “working towards” its previous guidance to deliver 720 aircraft by the end of the year.

“Demand is not an issue,” said Rob Morris, head of consultancy at Ascend by Cirium. But there are “big challenges”, notably getting the “engine suppliers on board”.

Morris points out that CFM International, the joint venture between Safran and GE Aviation, supplies engines to both Airbus’s A320 programme and to Boeing for its 737 Max family.

Boeing is building at a slower rate as it is still trying to clear its backlog of stored jets following two deadly crashes of the Max, but this could change in the coming months, adding additional strains to the industry’s supply chain.

“If Airbus does [increase its] rate at 75, given CFM’s lead on the A320 programme, they will be doing more than this rate, given they also provide engines to Boeing,” Morris said.

Asam said the company was in talks with the engine providers and that the “tone has changed from half a year ago”, when they initially cautioned about the ramp-up. “I trust as we move ahead and prove strong demand from customers . . . I am pretty confident there will be support from them.”

Most of the parts for the planes are assembled gradually by suppliers in the various tiers of the supply chain before arriving at the group’s final assembly lines around the world, from Toulouse to Mobile in Alabama.

The company is using what it calls a “supplier watchtower” initiative to anticipate and help to mitigate bottlenecks and other risks that might come up among its 12,000-plus direct commercial aircraft suppliers. The initiative does not specifically track suppliers but risks such geopolitical ones.

Critical to aid the ramp-up, according to Philippe Mhun, Executive Vice President Programmes & Services at Airbus, is that the company has given suppliers visibility.

“We are having open book discussion with our suppliers,” he said, adding that Airbus has given companies “certainty that what we are ordering is firm”.

It is also procuring some raw materials, including aluminium and titanium, for some suppliers to help with sourcing as well as pricing.

The aerospace industry has relied heavily on Russian-produced titanium, but both Airbus and Boeing have in recent months said they are looking to find alternative supplies. Airbus has previously said it has enough titanium stockpiled to last the short and medium-term.

One uncertainty is China and the lockdowns in the country that has complicated the logistical challenge, notably in terms of deliveries of planes to airline customers. About 20 per cent of Airbus’s annual deliveries go to China on average.

“Around 50 per cent of delivery commitments in China are through the leasing companies. That is dampening the impact of the slowdown,” said Mhun.

Some of the European company’s Chinese customers are still able to send people to Toulouse to take delivery of planes, according to people familiar with the matter.

Airbus has also managed to hand over some aircraft using “e-deliveries”, which simplify the contractual transaction process.

One unavoidable reality of today’s environment is cost inflation across the aerospace industry.

Christian Scherer, Airbus chief commercial officer, said the company was able to maintain its pricing through the pandemic, but admits that pricing pressures from inflation are a “cause of concern for us as an industrial enterprise”.

“Those inflationary pressures are a reality that the ecosystem will have to absorb,” he said.

Despite the various challenges, Scherer insists that the rate of 75 is the right one. “What we have dialled here is a right flight level for a sustainable period of time.”