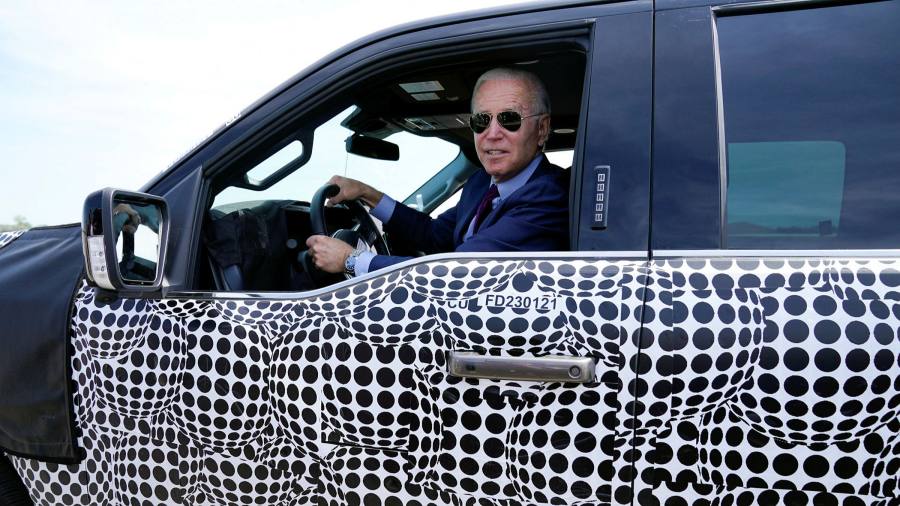 Joe Biden is a self-declared “car guy”, fond of driving the 1967 Goodwood green Corvette Stingray he received as a wedding gift from his father, who ran Delaware’s biggest Chevrolet dealership.

But cars — and the fuel that makes them go — are now a problem for the president. Soaring petrol prices, already at seven-year highs, are feeding wider inflation and threatening to derail Biden’s presidency, say political analysts.

On Tuesday, the White House said it could scrap federal gasoline taxes in a bid to bring immediate relief to drivers. The average price for a gallon of gasoline across the US is now $3.50, a rise of almost 50 per cent since Biden entered the Oval Office.

The tax relief would effectively subsidise consumption of the fuel, say analysts — a startling step for an administration that talked of ending oil industry tax breaks and weaning Americans off the combustion engine in favour of electric alternatives.

“That we’re even talking about this shows that there’s weak political support for decarbonisation policies,” said Bob McNally, president of Rapidan Energy. “If you’re willing to kill an 18.4 cent a gallon [tax] with minimal real impact on consumption . . . how in the world are you going to be willing to force consumers into electric vehicles or more fuel-efficient cars?”

That a president who pledged to lead an American clean energy revolution and electrify the nation’s cars is now trying to make it cheaper to burn oil underlines the need to curry favour with drivers who will vote in midterm elections later this year.

“There isn’t much Biden can say to fill a voter’s heart when it takes a Benjamin to fill his tank,” he added, referring to Benjamin Franklin, the American Founding Father whose image graces the $100 bill.

Biden also acknowledged that any conflict in Ukraine, or sanctions on Russia, could push energy prices higher. “I will not pretend this will be painless,” he said on Tuesday. But the administration was “prepared to deploy all the tools and authority at our disposal to provide relief at the gas pump”.

If the tax cut is one of these tools, it would be only the latest step by the White House to tame the petrol price rise and the ferocious rally in global oil prices that is driving it. Analysts say it is likely to be as ineffective as earlier efforts.

The attempts began in August, while US oil prices were trading at about $70 a barrel, when Biden national security adviser Jake Sullivan called on Opec to pump more crude. Seven weeks later, Sullivan travelled to Saudi Arabia to repeat the plea — another pivot for Biden, who had promised to make Saudi Arabia a “pariah” for its murder of Jamal Khashoggi.

The Saudis rebuffed the pleas anyway. Biden and his officials have also probed American oil companies for colluding on pump prices — a move with a long political history, but a meagre record of success.

In November, the White House announced the release of oil from its Strategic Petroleum Reserve, a step criticised for being blatantly political.

Biden took credit for the softer petrol price that followed the SPR announcement, although the relief was shortlived. On Monday, US oil prices hit a new high of more than $95 a barrel. Gasoline will head higher too, say forecasters.

While critics have said the White House’s fixation with petrol belies its climate commitments, some commentators say Biden is simply being pragmatic.

“Gas taxes are too politically fraught to be a pillar of climate policy,” said Paasha Mahdavi, a political-science professor at the University of California Santa Barbara. “This is giving up one political battle . . . so as to win a larger climate war, using political capital, gaining political support to get things like the climate provisions and Build Back Better back on the legislative agenda.”

Biden is not the first president to rage against fuel price inflation, Opec or oil companies — nor to fear the political fallout from pricey petrol.

An energy price crisis was among the forces that undermined Jimmy Carter’s presidency. In 2007-08, as global crude marched towards its all-time peak of almost $150 a barrel, White House officials joined a parade of foreign leaders to Opec capitals begging for more oil.

Robust US petrol demand has been another constant. In 2006, when George W Bush decried the US’s “addiction to oil”, Americans burnt through 20.7mn barrels a day of petroleum. Demand this year will be almost identical, according to federal forecasters.

It has appeared easier for presidents to demand more oil — as Donald Trump did, repeatedly, as he castigated Opec on Twitter — than to conquer the addiction.

It was Trump who in 2020 cajoled Russia, Saudi Arabia and others in the Opec+ producer group to slash supplies to prop up prices that had fallen so steeply they threatened to devastate America’s own oil industry.

Opec+ has been steadily restoring that oil, just not as quickly as Biden would like.

Despite the surging crude price, US oil output, at about 11.6mn barrels a day, remains far below the record high of around 13mn hit before the pandemic. Wall Street has put pressure on companies to pay back capital rather than plough it into more drilling.

Biden’s biggest problem with petrol prices, though, may be his limited power to shape them.

The mooted gasoline tax relief “underscores how little the US has in its tool chest to influence oil prices”, said Robert Campbell, an analyst at consultancy Energy Aspects.

“The fundamental problem for the oil market is that capital has been withdrawn from exploration and production, and demand has come back. Price needs to do the work to get those things back into balance. A pre-election giveaway won’t change that fact,” Campbell said.