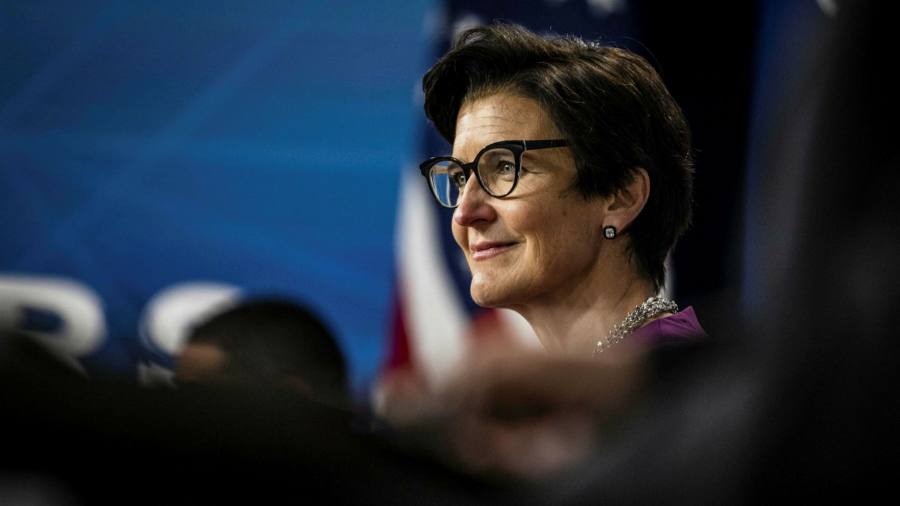 The last time Citigroup hosted an investor day, then-chief executive Michael Corbat tried to convince shareholders that the bank was on the cusp of a turnround after years of underperforming its peers and raising the hackles of regulators.

“Citi has crossed an inflection point,” he said at the 2017 conference, pointing to opportunities in everything from investment banking to Mexican consumer lending. “We’re now clearly on a path to growth and stronger returns.”

Next month, his successor, Jane Fraser, will make a similar pitch, but it will be a harder sell.

Since Corbat’s declaration, Citi’s shares have fallen further behind its peers, it has lost market share in investment banking and it has decided to exit most international retail banking. Last year, Corbat retired earlier than expected after US regulators concluded that Citi had failed to correct “longstanding deficiencies” in its processes and technology.

The vision for the 200-year-old bank that Fraser will lay out at the company’s March 2 investor day is more modest than the global financial supermarket imagined by Sandy Weill, who merged his Travelers financial conglomerate with John Reed’s Citicorp in 1998.

Having put most of Citi’s foreign retail banking network up for sale, Fraser is expected to use the bulk of the $11bn in capital freed up by the retreat on three businesses: the bank’s giant trade and treasury services arm, commercial banking for midsized companies and wealth management, according to people familiar with Citi’s plans. A smaller portion of the capital will go to investment banking and capital markets, the people said.

The result is that, for now, Citi is giving up hopes of cracking into Wall Street’s investment banking top three. Fraser’s focus will be increasing market share in business lines such as commercial banking and transaction services that had higher returns on equity than Citi’s overall 11.5 per cent.

Citi said: “Having made the difficult decisions to exit certain consumer markets which don’t fit our strategy, we are focused on five core and interconnected businesses. Our strategy is to invest in a select number of growth opportunities to increase our scale, while we also optimise existing mature businesses to maintain and extend our leadership positions.”

Making the case for this strategy will put the communications skills of the 54-year-old former McKinsey consultant — known for her frank but encouraging manner — to the test. Fraser, who was paid $22.5mn in her first year as chief executive, has seen Citi’s share price fall 3.6 per cent since taking the helm in March 2021, compared with a 22 per cent gain in the benchmark KBW Banks index.

“She has a way of saying even the things that aren’t necessarily good with a positive tone,” said Paco Ybarra, the global head of Citi’s institutional-clients group, which includes investment banking, treasury services and commercial banking. “We’ve had tough times . . . she’s had to keep the morale up.”

Citi’s challenges are in some ways similar to the problems at HSBC. Both lenders are retreating from international consumer lending and putting less emphasis on investment banking while dealing with regulatory fallout — in the case of the British lender, resulting from a series of compliance, money-laundering and tax evasion scandals.

Citi’s room for manoeuvre is limited by a 2020 consent order with US banking regulators under which it paid $400mn and agreed to upgrade its processes and technology. The action came after Citi mistakenly wired $893mn of its money to creditors of Revlon, a client, in 2020.

As part of the agreement, Citi faces restrictions in making strategic acquisitions, pushing it to focus on organic growth while rivals like JPMorgan Chase can hunt for deals. Complying with the order is also driving up expenses as Citi hires thousands of auditors, technology and other compliance employees to improve oversight.

Investors worry that Citi risks falling further behind in businesses such as investment banking and credit cards as Fraser focuses on servicing medium-sized companies and managing rich people’s wealth, areas where it is smaller than its leading competitors.

“There’s always a question of growth versus profitable growth,” said Ken Usdin, a Jefferies analyst. “Citi is going to have to toe that line of making sure that they maintain relevance across the product set.”

Citi’s difficulties will be particularly pronounced on Wall Street. According to Dealogic data, it has lost ground in most categories of investment banking since the bank’s top brass championed it during the 2017 investor day as a strategic growth area that could help close the profitability gap.

Dealmaking profitability across Wall Street is expected to be lower this year as volumes normalise and a war for talent drives up salaries. Investment banks doled out the biggest bonuses in more than a decade last month, with Goldman Sachs boosting pay 33 per cent to $17.7bn last year.

By contrast, Citigroup gave out smaller bonuses than peers, prompting bankers to complain about pay in an internal survey, according to a presentation slide that went viral on social media. “Being at Citi is a huge mistake,” one associate wrote, anonymously.

“You’ve got to spend a lot to keep up,” said Glenn Schorr, an Evercore banking analyst, noting higher expense projections across the banking sector in the last quarter.

Another uncertainty involves Citi’s US retail business. In 2018, it teased plans to leverage its position as a top US credit card issuer to build out a national digital consumer business that could better compete with the coast-to-coast franchises of JPMorgan’s Chase and Bank of America. John Gerspach, then chief financial officer, said he would be “disappointed” if it did not happen within three years.

The strategy has yet to show dramatic results. Citi plans to keep its relatively small US retail deposit business — it has 689 branches, compared with 4,000 or more at JPMorgan, BofA and Wells Fargo — while operating a consumer business that will continue to be “mostly credit cards”, according to one executive familiar with the plans.

“Citi will always be a US retail bank, but we will never be a JPMorgan or BofA. We can be a relatively strong performer that will grow faster, but we have work to do,” said one person involved in the revamp. Bank executives “just didn’t grapple with the issues” and refused to admit that “their baby is ugly”, the person added.

Like executives at HSBC, Fraser is drawn to the potential of wealth management. The British bank is redirecting capital to its insurance, wealth and asset management businesses in Asia, where it has pledged to invest $3.5bn and hire 5,000 advisers.

Fraser wants wealth management to become a core business at Citi, but that will probably take years since it only accounted for roughly 10 per cent of group revenue last year. Citi’s wealth businesses generated annual revenue of $7.5bn as it grew its adviser base by 20 per cent to help recruit more clients, said Jim O’Donnell, who Fraser installed as head of global wealth in her first few weeks in the top job.

It is somewhat ironic that Citi is trying to build a wealth business on a base that is far smaller than its rivals. It used to own a leading wealth manager — Smith Barney — but sold it to Morgan Stanley after the financial crisis. Morgan Stanley’s wealth division raked in more than $24bn in revenue last year.

“Smith Barney was a great business, but it’s no longer here so we are focused on what we can be,” O’Donnell said, adding that Citi’s wealth business will continue to be more global in scope than the accounts Morgan Stanley inherited from Smith Barney.

Ultimately, Fraser’s goal at the investor day will be to simultaneously inspire investors and keep her employees motivated. If past performance is any guide, her public statements will be only part of her efforts.

A case in point came after Fraser jettisoned Citi’s global consumer network following a “dispassionate” review of its operations. She recorded a video in Spanish to explain to employees in the Mexican consumer business why she had decided to get rid of the division she once headed.

“It was better than a sad memo,” said one person who watched it.