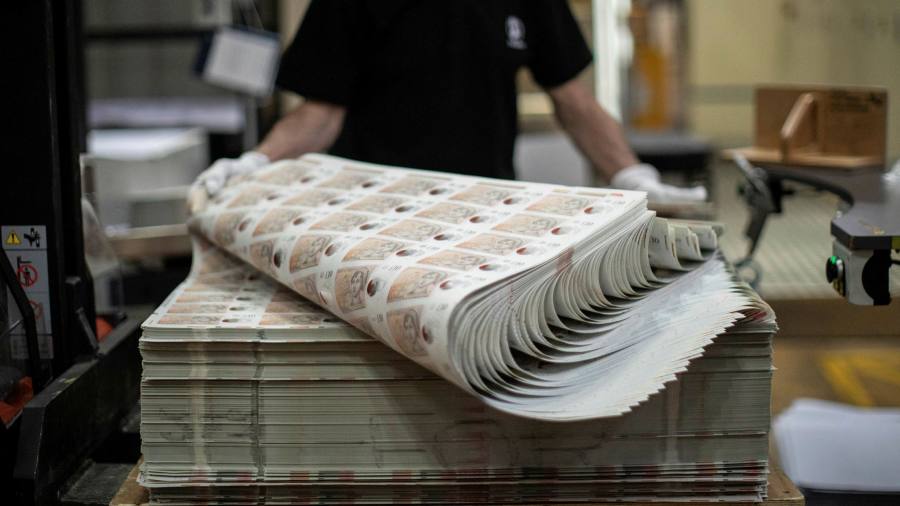 British currency maker De La Rue has warned that profits would be hit by the rising cost of supplies, sending its shares sharply lower on Wednesday.

The company, which makes British banknotes, said “further headwinds” would curtail adjusted operating profit for 2023. It added that there was now a “substantial degree of uncertainty in the outlook”, with supply chain inflation set to increase operating costs by £5mn this year.

“There is a possibility that disruption may affect revenue,” the company said. “The board now expects that adjusted operating profit for full year 2023 will be broadly flat versus full year 2022, and weighted towards the second half.”

De La Rue shares fell more than 8 per cent on Wednesday afternoon to around 102p. The company’s supply chain includes chips used in passports, while it also faces rising costs for raw materials such as the chemicals and polymer sheets, which are oil based, used to make banknotes. Freight costs are rising too and its suppliers are also increasing prices owing to their own energy costs.

British businesses have been warning of lower profits this year because of rising costs in their supply chains and the impact of inflation on consumers.

Marks and Spencer warned of cost pressures and economic uncertainty on Wednesday, while its Ocado Retail joint venture cut its growth outlook as costs continue to rise. Analysts questioned how much of this could be passed to the consumer, or to what degree it would hit margins.

Online estate agent Purplebricks also warned on Wednesday that it would swing to a loss this year, following housing sales slowing as interest rates rise and concerns about the broader economy intensify.

De La Rue said it was making progress with its turnround strategy, which includes cost-cutting and streamlining its operations. The company improved its market position across business divisions, it added.

Clive Vacher, chief executive of De La Rue, said it was “working hard to bat away” cost pressures but that the wider macroeconomic environment remained uncertain.

“We have prudently revised our outlook for the financial year 2022-23 adjusted operating profit, due to further headwinds experienced since the end of our financial year, and a realistic expectation of how far we can mitigate them.”

The company had already been forced to admit that a turnround plan started by its new management would take longer than expected after missing analysts’ forecasts for operating profit for this year.

Vacher added that while progress had slowed, De La Rue remained “strongly on the right path strategically and operationally to create a strong, cash-generative company in the medium term”.

De La Rue reported an adjusted operating profit of £36.4mn in the 12 months to the end of March, down from £38.1mn the previous year. Revenue was also down to £375.1mn, from £397.4mn last year. However, the figures from last year include sales from operations that have now been sold or closed.