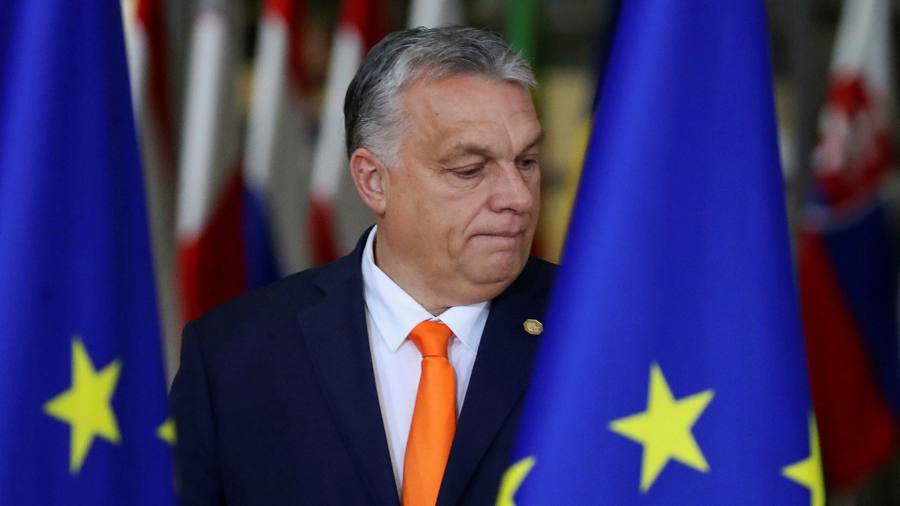 It is summit day and the EU’s response to the war in Ukraine continues to dominate leaders’ agenda, in particular the long-delayed oil embargo that may (or may not) be agreed in the coming days.

Germany’s vice-chancellor Robert Habeck warned yesterday that the EU unity was fraying, after ambassadors failed to agree on the latest compromise — exempting pipeline oil — because of Hungary’s continued reticence and other capitals’ question marks over complications for the internal market.

On Ukraine’s immediate financing needs, I’ll unpack the somewhat convoluted logic that has so far held up an agreement on EU’s proposed €9bn in macro-financial assistance.

And with a flurry of calls to Moscow over the weekend, I’ll fill you in on why Serbia seems to be the only country that may have secured something from Russia.

EU ambassadors are reconvening in Brussels this morning in a last-ditch attempt to secure a deal on the sixth sanctions package before leaders start arriving for their two-day summit, later in the afternoon.

The goal of the last-minute meeting, which comes after yesterday’s ended without an agreement, is to avoid the issue hijacking the leaders’ dinner and potentially descending into complete acrimony.

But diplomats familiar with the discussions last night were not convinced that the latest compromise — a carve-out for pipeline oil, so that the embargo only applies to shipped oil — was going to unblock Hungary’s month-long resistance.

Budapest is still objecting to the embargo and raising security of supply issues, given that the pipeline crosses Ukraine and in case of disruptions they would have to fall back on shipped oil, according to two diplomats familiar with the discussions.

In addition to that, about a third of EU countries have raised concerns about the internal market and how this carve-out would work from a legal point of view.

The main question here is how can the bloc ensure a level playing field when some countries will stop Russian oil imports and buy expensive alternative supplies on the world market, while others, including Hungary and Germany, will continue importing cheap pipeline oil that can be refined and sold in the rest of the EU at a competitive advantage?

The original oil embargo included longer phase-in periods for Hungary, Slovakia and the Czech Republic, all countries dependent on the Southern Druzhba pipeline for their security of supply. The current compromise proposal has been broadened to exclude the Northern Druzhba pipeline (serving Poland and Germany) from the embargo.

Both pipelines together provide for a third of all EU imports of Russian oil, but the Northern Druzhba pipeline takes up 66 per cent of that total.

“It will be discussed by leaders, but I don’t think they are able to solve technical issues, which require legal experts,” said one EU diplomat. “But if they agree on a way forward, maybe [the sanctions package] can be finalised on Wednesday and then it would enter into force towards the end of the week.”

Another diplomat said that the calendar could slip again for a few more weeks, before leaders meet again for their regular summer summit, on June 23-24.

With Ukraine’s president Volodymyr Zelensky taking part via video call for the third time in an EU summit since the war began, one lingering question surrounds the €9bn in macro-financial assistance that the European Commission floated earlier this month, but which capitals have not yet endorsed.

“We will try to reach an agreement on the macro-financial assistance of €9bn,” said a senior EU official. “There is willingness to do this, whether via loans or grants — the modalities will be agreed later,” the official added.

The reasoning is that the IMF last month advised countries to help Ukraine with grants rather than loans, since it will have a hard time paying them back. Berlin insists that other capitals follow its lead after it pledged €1bn in bilateral grants to Ukraine. But Paris, Rome and other capitals would prefer loan guarantees because they do not burden their budgets right away.

The commission will have to put forward a formal proposal in the coming weeks, with the compromise likely to be struck with a mix of loans and grants.

Central banks are raising rates rapidly in the most widespread tightening of monetary policy for more than two decades, according to a Financial Times analysis, as inflation hits multi-decade highs in many countries.

European leaders have resumed their calls with Vladimir Putin over the weekend, but the only one who seems to have got something out of it is Serbia’s Aleksandar Vučić.

Germany’s chancellor Olaf Scholz and France’s president Emmanuel Macron jointly called the Kremlin on Saturday and urged Putin to unblock the grain supplies from Ukraine’s Black Sea ports. (The topic of a looming global food crisis will be discussed by EU leaders during a session tomorrow with the head of the African Union, Macky Sall).

Putin’s response to the call was predictable: the EU should first lift sanctions on Russia, only then would he consider unblocking grain exports.

“It’s a bit perverse at least,” said an EU diplomat. “Russia starts a war, it has huge consequences for food needed on the other side of the Mediterranean, and then it is using it as an instrument against us.”

The renewed phone diplomacy and the Kremlin’s cynical response have caused irritation in the Baltic countries, with Latvia’s deputy premier Artis Pabriks, saying on Twitter: “It seems that there are number of so-called Western leaders who possess explicit need for self-humiliation in combination with total detachment from political reality.”

But not all phone calls were futile. Serbia’s Vučić said yesterday that he had agreed a three-year gas supply contract after speaking to Russia’s president.

“I cannot speak about the price now, all details will be agreed with Gazprom,” Vučić said, according to Reuters.

Serbia’s 10-year gas supply contract with Gazprom runs out tomorrow — so the extension at a discounted price is a welcome prospect for the Balkan country, even though Brussels insists that Belgrade needs to align with the western sanctions regime and wean itself off Russian fossil fuels.