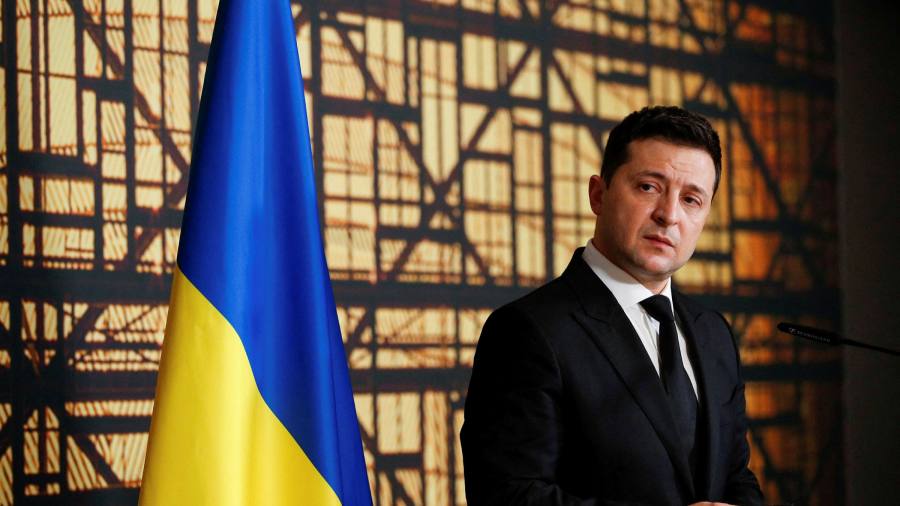 Good morning on what hopefully is not the day Russia invades Ukraine.

The US earlier had warned Moscow could make a move as soon as today, but Vladimir Putin yesterday indicated he is willing to talk some more and that he will pull back some of the troops — a statement met with “cautious optimism” by Nato, whose defence ministers are meeting today in Brussels.

Our main focus is the European parliament, where European Council president Charles Michel is due to address the plenary on Ukraine, along with the EU foreign policy chief Josep Borrell.

Group leaders in the parliament are aiming to issue a statement of support for Ukraine — but the strong words hide mixed views among MEPs over how to handle Russia and on whether it is the right moment to have the Ukraine’s president in Strasbourg (even via video link).

Later tonight, Michel and Borrell will join other EU and African leaders in Paris at a meeting on the security situation in the Sahel region. Officials expect a decision on the possible withdrawal of the French-led counter-terrorism mission in Mali, given the military government’s involvement with a Russian group of mercenaries. (More here)

Speaking of EU-Africa initiatives, some diplomats are bemused by the European Commission’s calculations when it comes to investment pledges. How €20bn in existing yearly investments can be leveraged to €150bn — as European Commission president Ursula von der Leyen announced recently — remains a mystery. Meanwhile, EU officials seek to divert attention away from the numbers and more towards a set of ‘flagship projects’ to be endorsed at the upcoming EU-African Union summit.

In corporate governance news, a group of executives of large companies are writing to the commission today to request rules on tying bonuses to sustainability targets.

The European parliament’s group leaders (most of them, at least) are expected to issue a statement of support for Ukraine today, after a complicated spell of political wrangling, write Eleni Varvitsioti in Strasbourg and Sam Fleming and Valentina Pop in Brussels.

The draft statement, which politicians hope will be signed off by the parliament’s conference of presidents, hits all the right notes. It condemns Russia for its military build-up and for threatening Ukraine and Europe as a whole.

It adopts a maximalist view on sanctions — including cutting Russia from the international payments system Swift and halting the Nord Stream 2 pipeline project in case of an attack.

Group leaders will also ask Russia to withdraw its forces and stop its attempts to destabilise Ukraine, according to the draft, seen by Europe Express. They support Kyiv in its sovereign right to choose its alliances. That includes calling for European institutions to maintain a “long-term perspective” on Ukraine joining the EU.

But the draft had a complex genesis. Had it gone through other channels and been formulated as a resolution put to a vote in the plenary, there was a risk that it would have provoked a small but loud minority of dissenting MEPs who espouse more Russia-friendly views. “It’s easier this way,” said one MEP.

It also comes after days of discussion over whether Ukraine’s President Volodymyr Zelensky should be asked to address the parliament either in person or by video link from Kyiv.

Parliament officials say there had been an open invitation from MEPs who went to Ukraine two weeks ago “to address the European parliament at your convenience.” Then the parliament’s president, Roberta Metsola, had a phone call last week with Zelensky and the address was on their agenda, but they did not settle on a specific date.

Metsola stated two days ago that “we are with Ukraine” and stressed that the parliament will show its solidarity this week — including by voting today on a €1.2bn EU macro-financial assistance package.

But in the end Zelensky is not expected to speak to MEPs — or at least not today. After all, on Monday he declared today to be a “day of national unity” amid warnings by the US of an imminent attack — meaning it was not an obvious moment for him to be speaking to Strasbourg.

Some MEPs also privately admit to mixed feelings about the idea of Zelensky addressing politicians at a moment of intense uncertainty over the course of the Ukraine crisis and over Russia’s intentions. While no one would go on the record, several MEPs wondered if it would be “provocative” having Ukraine’s president speaking to the European parliament today.

The European Central Bank must consider the “unprecedented” rise in house prices when assessing the high level of inflation and deciding how fast to tighten monetary policy, ECB board member Isabel Schnabel told the Financial Times. (More here)

Executives of large companies should have their bonuses tied to sustainability targets, according to a letter signed by about 40 chief executives to be sent to the European Commission today, writes Alice Hancock in London.

“Sustainability objectives reflect the long term while financial results are monitored quarterly and stock prices are monitored daily,” the letter, seen by Europe Express, says. It argues sustainability should be integrated into short-term governance through “the variable part of the executive remuneration package”.

Pascal Canfin, a French MEP who heads the European parliament’s environment committee and who spearheaded the letter, told Europe Express that it would be remiss of the commission to miss an opportunity to tie environmental targets to executive pay.

Companies could, for example, make between 10 and 20 per cent of bonuses attributable to sustainability goals, Canfin suggested. Some more ambitious businesses such as the insurer Axa have already set similar targets affecting 30 per cent of bonuses.

A similar measure was mooted by the commission in earlier discussions but, the letter says, “it seems to have disappeared during the internal negotiations at the commission, even though it is an important part of translating the European Green Deal into the daily governance of large European companies”.

The letter had been signed by 36 executives yesterday, including the bosses of Engie, Veolia and former Unilever CEO Paul Polman, with Canfin’s office expecting more to add their names before it is sent to the commission’s president, Ursula von der Leyen, and to Frans Timmermans, the commissioner in charge of the EU Green Deal.

The intervention comes ahead of the publication next week of the commission’s delayed sustainable corporate governance proposals, which aim to push companies into thinking more about long-term societal benefits than short-term shareholder gains as well as increase scrutiny of supply chains for environmental and human rights abuses.

The size of companies that could fall under the remit of the proposals is still up for grabs. The letter said that all “large” European companies should be within its reach. EU officials suggested that businesses with 250 or more employees would be a good place to start.