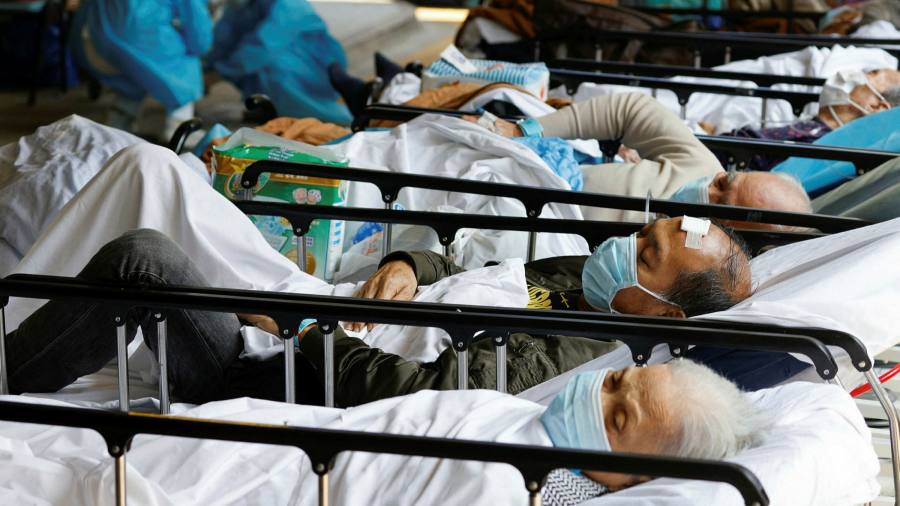 Covid-19 may be running rampant through Hong Kong, where fatality rates are among the highest in the developed world, but 80-year-old Ho Yau-lin is in no hurry to get vaccinated.

Ho is scared of contracting the virus, but she is far more worried by unsubstantiated reports about the negative side-effects of the jab for those with chronic illnesses like herself.

“I’m afraid that if I get the shot, my body cannot handle it,” said Ho, who is just one of the hundreds of thousands of unvaccinated elderly people in the city.

After two years of keeping coronavirus at bay, some Hong Kong residents were lulled into complacency, many were suspicious of government vaccination campaigns after pro-democracy protests were crushed while others were confused by conflicting advice.

But the Omicron variant has ripped through the Asian financial hub and the elderly are at the highest risk of death.

Infectious disease experts have criticised the government and parts of the media for spooking Hong Kong’s elderly with scare stories but have warned that even if pensioners get inoculated immediately, it may be too late to slow the number of deaths.

Yuen Kwok-yung, a microbiologist at the University of Hong Kong and a government pandemic adviser, estimated that as many as 80 per cent of people living in Hong Kong nursing homes have been infected, meaning that death rates would probably soar even higher.

“The best time for [elderly people to get vaccinated] has already passed . . . elderly people will now have to pay the price,” Yuen said.

The wave of infections poses the gravest threat to Beijing’s zero-Covid strategy since the start of the pandemic. Despite maintaining strict border controls, there have been more than 400,000 cases in Hong Kong, a city of 7.4mn, far more than mainland China’s 110,000 out of a population of 1.4bn. The virus had claimed more than 1,550 lives in the territory by Friday.

Hong Kong’s government is under intense pressure from Beijing to control the outbreak while city officials are being blamed for failing to protect vulnerable groups and prepare for outbreaks at nursing homes despite numerous grim examples abroad.

Just 30 per cent of Hong Kongers older than 80 have been inoculated with two doses of the vaccine, despite the availability since early 2021 of both the Chinese Sinovac shot and the jab developed by BioNTech.

“The Hong Kong government probably made a mistake in its early vaccination strategy . . . officials at that time suggested [elderly people] who suffered from chronic illnesses to consult a doctor first and wait till their illnesses stabilised before they get the shot,” David Hui, a respiratory disease expert at the Chinese University of Hong Kong and a government adviser, told the Financial Times.

“This created the misconception among many that, if they have [chronic illnesses], they should postpone getting vaccinated.”

Local media amplified the fears and as recently as last month were publishing sensationalist reports about people who had died from unrelated causes after taking the vaccine.

Many elderly people were initially advised by doctors to avoid getting the jab, according to Stephanie Law, a managing director of Culture Homes, a nursing home group. “The doctors were quite concerned they would be responsible for any consequences,” Law added.

An opt-in policy, that has since been reversed, for the vaccine in nursing homes made matters worse, while the requirement that family members consent to a jab accentuated the problem. “Their relatives also bear some responsibility,” said Ivan Hung, a government pandemic adviser and infectious disease professor at HKU.

More than 750 care homes are battling outbreaks but vaccine outreach programmes have been suspended because of strict protocols for medical staff administering the shots. Some nursing home staff are working while sick and many homes do not have the room to isolate sick residents, stoking the virus’s spread.

Nursing home residents in Hong Kong often share a room with as many as five other people. And even if they do have private quarters, rooms are separated by a flimsy divider rather than a solid wall.

Kenneth Chan, chair of the Elderly Services Association of Hong Kong, has urged the government to allow health workers into homes as soon as possible. “Outbreaks at elderly homes might not stop in a few months,” said Chan. “How long do they have to wait? For three months? Four months?”

On Friday, Patrick Nip, the civil service secretary, said teams would visit care homes in the coming weeks to help speed up vaccinations.

Ben Cowling, an epidemiologist at HKU, has long warned the city needed to improve preparations for another wave of infections. “If there was any mistake . . . it was perhaps a mistake of not anticipating the risk of a large outbreak occurring under the zero-Covid strategy,” he said.

A Hong Kong government spokesperson defended its public health messaging on vaccines in a response to the FT, saying it had always “taken proactive and vigorous measures” to encourage elderly people get jabbed.

Another factor that health officials will struggle to overcome is a deep distrust of government, which has worsened since the introduction of a draconian national security law in 2020 to stifle dissent.

Sit Pui-yu, whose mother died during the Sars epidemic that claimed 299 lives in Hong Kong in 2003, lives alone in a public housing apartment in Kowloon. The 71-year-old fears catching the virus but believes officials are “whitewashing” concerns about the vaccine.

“Even if every single person in Hong Kong is vaccinated, I will not get jabbed,” he insisted. “Why should I kowtow to the government?”