How the EU’s embargo on Russian oil came about, eventually 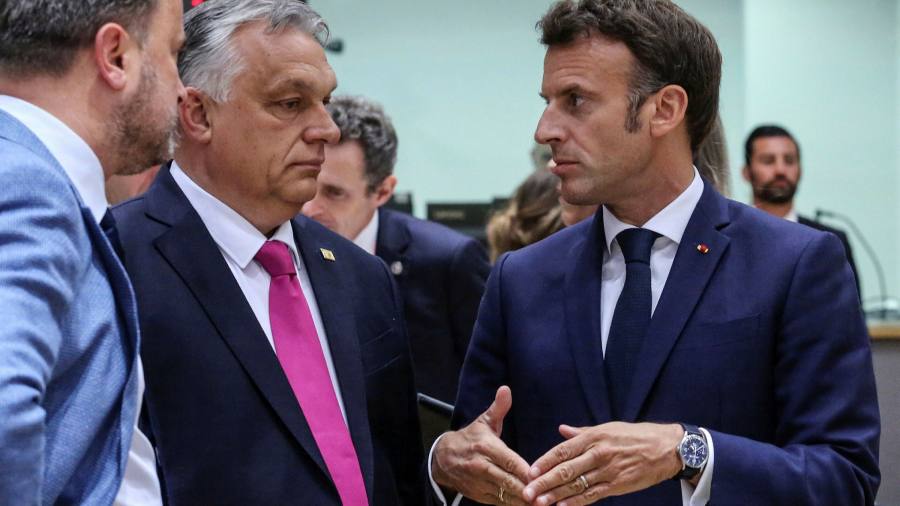 EU leaders refrained from burning the midnight oil at the summit yesterday, backing a deal on the sixth sanctions package that was palatable to central European states, notably Hungary.

We will run you through the concessions that made it happen and tease out the devil that is still hiding in the details.

With the Netherlands and Denmark expecting to be cut off from Russian gas supplies today and Copenhagen on the verge of another referendum on strengthening security and defence co-operation within the EU, we will look at the implications of Russia’s gas politics in northern Europe.

The worst-case scenario of a leaders’ dinner ending in discord over sanctions was avoided yesterday, write Sam Fleming, Valentina Pop and Andy Bounds in Brussels.

Instead, the doomsayers who predicted a bitter and lengthy negotiation well into the early hours of Tuesday were proven wrong. The compromise around exempting pipeline oil and applying the embargo only to seaborne Russian crude was agreed upon shortly before midnight — and the unity message carried the day, once again.

Germany’s chancellor Olaf Scholz wrote on Twitter that the bloc had agreed on “further far-reaching sanctions against Russia”, including an oil embargo “on a majority of oil imports”.

EU diplomats will return to the legal text over the next few days before the partial oil embargo can enter into force, but the political agreement struck on Monday marked a significant step in the union’s response to Vladimir Putin’s war in Ukraine.

It put an end to the month-long stalemate on the sixth sanctions package caused mainly by Hungary digging in its heels over financial compensation for its entire energy transition. Hungarian prime minister Viktor Orbán agreed to compromise once he obtained a carve-out for pipeline oil and a solidarity guarantee in case of supplies being disrupted.

It was quite a climbdown from his initially defiant words arriving at the summit, when he declared there was “no agreement at all” on the sanctions as he accused the European Commission of “irresponsible behaviour” in its handling of the oil blockade.

Orbán’s team also demanded wording in the summit conclusions providing for “compensation for redundant investments” as one of the conditions of the deal, before later quietly dropping the request.

The big question now is how long the “temporary” exemption for pipeline oil will last. Leaders said in the summit conclusions that they would “revert to the issue . . . as soon as possible”.

Ursula von der Leyen, commission president, said it will be helpful to provide Hungary with the time needed to “really switch off” Russian oil. This, she suggested, could be facilitated by an expansion by Croatia of the capacity of its Adria pipeline, providing alternative supplies of crude to Hungary. While no timeframe had been specified on the pipeline carve-out, it was “very clear” that member states would come back to the topic one way or another, she added.

Hungary and its neighbours will not be allowed to sell Russian pipeline crude to other EU countries, nor refined products after eight months from the entry into force of the sanctions package, according to a draft legal text seen by Europe Express. This was a provision aimed at preserving a level playing field within the single market, a concern raised by multiple capitals in the run-up to the summit.

Underlying Orbán’s complaints about the oil embargo is a sense, by no means confined to the Hungarians, that von der Leyen and her team did not handle the sixth package as adeptly as they did previous rounds of sanctions. Some argued the commission should have done more to prepare the ground for the measures among member states.

Mark Rutte, the Dutch prime minister, said the EU should learn from the difficult negotiations over the sixth sanctions package.

“We should have an upfront debate about the technicalities before we start to discuss what a package would look like because we are now in the more difficult part of the sanctions,” he told reporters. As for a potential seventh package, he said, “you know it would be even more difficult”.

However, he declined to blame the commission for the difficult gestation of the EU’s latest round of penalties. “I point three fingers at myself and one at the rest of the group.”

The impact of western sanctions is slowly starting to show in Russia, particularly in shopping districts and malls, where up to 20 per cent of shops are shuttered — mostly foreign brands that have left the country or stopped selling merchandise.

Less than 72 hours after Finland submitted its application to join Nato, Russia severed supplies to the country.

And with Denmark holding a referendum on whether to end its opt-out from the EU’s defence and security policy — a vote entirely sparked by Russia’s full-scale war against Ukraine — the Scandinavian nation’s largest utility is warning Moscow could end gas supplies there.

There is no direct link between the referendum and Nato application and supply cut-offs; the blame for both was directed at Finnish and Danish utilities for refusing to pay for gas in roubles because of sanctions placed on Russia over the Ukrainian invasion.

Ørsted, Denmark’s largest utility, warned yesterday that there was “a risk” that Gazprom Export would stop supplying gas as it would continue to pay in euros. The payment deadline is today, and Denmark would join Finland, Poland and Bulgaria if the supply were turned off. (The Netherlands is also expecting to be cut off today after refusing to comply with the new Russian payment scheme, which includes opening a roubles account.)

Ørsted, which said any such move would be a breach of contract, said that as no gas pipeline directly connects Russia with Denmark, it would still be possible for the Scandinavian country to get gas, but it would “to a larger extent” have to be purchased on the open market. “We expect this to be possible,” it added.

The referendum tomorrow marks the rare occasion that pro-EU supporters in Denmark are optimistic about going into a vote. After rejecting the Maastricht treaty in 1992 — which led to Denmark gaining four opt-outs — Danes have rejected joining the euro in 2000 and changing their justice opt-out in 2015.

As always with referendums, there is confusion over the issue at large — few Danes know exactly what they have opted out of — and the vote itself has become about other issues. Opponents argue that Nato alone should take care of Denmark’s security, while the centre-left government wants Copenhagen to be at the heart of Europe.

Underlying it all is a sense that Copenhagen now aligns itself much more with Berlin since the UK left the EU. Russia cutting off the gas may remind some just what is at stake.