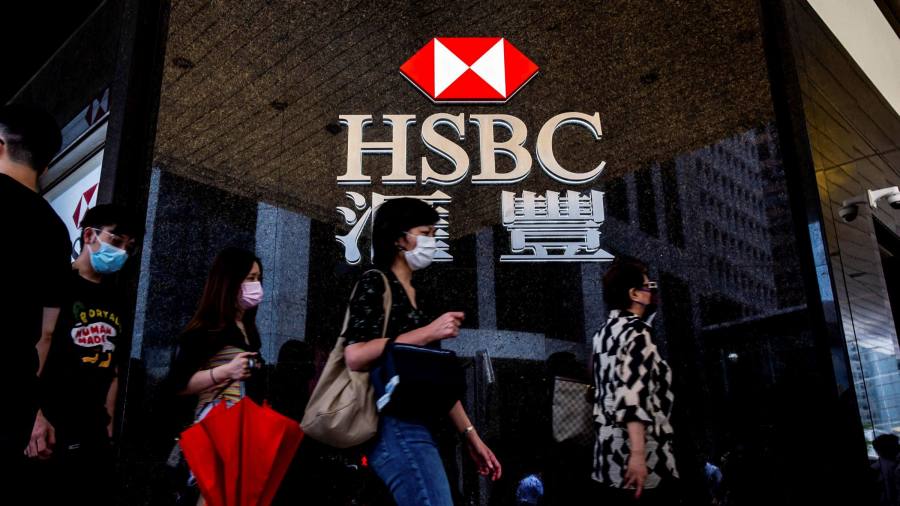 HSBC set aside $451mn as it braced for more defaults in the troubled Chinese real estate sector and warned of a slowdown in wealth management due to Hong Kong’s restrictive “zero Covid” strategy, marring otherwise positive fourth-quarter earnings.

The bank has made growth in wealth management a cornerstone of its “pivot to Asia” strategy, pledging to invest $6bn in the region and hire thousands of advisers. However, China’s efforts to eliminate coronavirus have stymied its progress as Hong Kong’s borders remain closed in effect and many of its branches shuttered.

“The market [has] slowed down as a consequence of market declines and restrictions in Hong Kong, but we expect that to have a temporary impact,” chief executive Noel Quinn said in an interview on Tuesday. Nevertheless, the impact has continued into the first quarter, “which is traditionally the strongest”, he added.

The headwinds in its most important market offset a more buoyant set of earnings, which showed the London-based lender is recovering from the worst of the pandemic and is optimistic about growth with interest rates set to rise.

Earnings were also flattered by a further release of $276mn of Covid-related loan-loss provisions in the UK and Europe. Group revenue rose 2 per cent to $12bn compared with the same period a year ago.

HSBC increased its dividend and announced it would buy back another $1bn of stock when it completed an existing $2bn programme. It added that it should reach its profitability goal of 10 per cent return on tangible equity a year earlier than expected, in 2023.

This is largely because of an expected windfall from an increase in interest rates. With a global deposit surplus of $700bn, chief financial officer Ewen Stevenson estimated that a 1 percentage point jump in rates would generate an additional $5bn of net interest income annually.

The outlook on rates has become “significantly more positive” said Quinn. “After absorbing the impact of low interest rates for some time, we believe we have turned the corner” he said.

“HSBC earnings were not as bad as feared,” said Citigroup analyst Yafei Tian. “Investors might be incrementally concerned with the impact of Hong Kong macro slowdown to the top-line.”

The shares fell 1 per cent after the announcement, having recovered 25 per cent in the past 12 months. The stock hit a 25-year low in September 2020, weighed down by lockdowns and tension between the US and China.

China’s real estate sector is still reeling from the collapse of property development giant Evergrande under a $300bn debt load late last year. It has fuelled crises at rivals, which have struggled to roll over their own debts amid a government crackdown on borrowing and a loss of market confidence.

“The change in policy measures created a significant amount of uncertainty, leading to liquidity and refinance risk for clients,” Quinn said. “We thought it wise to reflect the increased level of uncertainty and create some modelled impairments” on its $21bn of mainland China exposure.

The chief executive also warned of a “weaker” performance at its Asian wealth business at the start of this year. While net new invested assets in Asia wealth more than doubled to $36bn in 2021, revenues declined slightly in the fourth quarter.

Hong Kong is struggling to contain a major outbreak of coronavirus, with more infections in the last month than in the past two years.

Hong Kong makes up a third of the value of HSBC’s customer accounts globally, and generates around a third of its profits.

The bank flagged in its annual report that “restrictions in Hong Kong, including travel, public gathering and social distancing, are impacting the Hong Kong economy, and may affect the ability to attract and retain staff”.

HSBC, like many of its peers, has been forced to close around half of its branches in Hong Kong.

“Hong Kong has a record of bouncing back,” Quinn said, adding he was still fully committed to the bank’s Asia strategy. “The slowdown in wealth is temporary — wealth creation in Asia is a huge opportunity that we should still pursue.”

Fourth-quarter revenue at HSBC’s investment bank rose 1 per cent as income from advisory and capital markets increased 7 per cent, counterbalancing a 2 per cent fall in trading revenue.

However, pre-tax profit fell 41 per cent as costs rose substantially, largely due to a 31 per cent rise in the bonus pool to $3.5bn, after a 20 per cent fall in 2020. Stevenson blamed this on “a significant repricing of investment banking talent [in the US] . . . we are trying to be competitive”.

That is a marked swing from 2020, when the bank’s provisions for bad debts exceeded $8bn at the peak of lockdowns, eventually pushing annual profit down 45 per cent to $12.1bn.