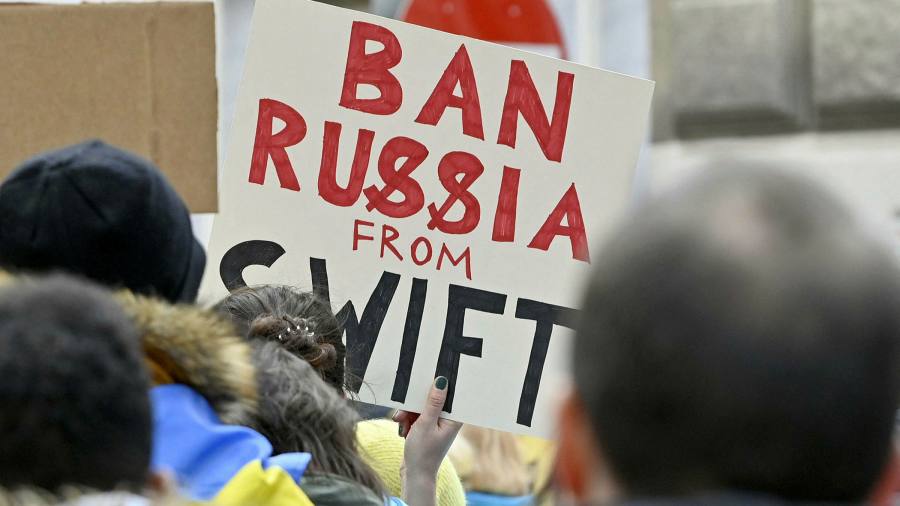 If not now, when? The EU will expel some Russian banks from the global interbank payments network Swift — but may still permit some banks to take payment for the energy exports that are its main overseas earner. No wonder Ukrainians are disappointed.

“If the EU does not close the financial system to Russia, it can still access cash and pay for warfare,” said Max Dzhyhun, a political consultant speaking from an undisclosed location within Ukraine.

The fog of war cloaks the meeting rooms of Brussels as well as the outskirts of Kyiv, where Ukrainian soldiers and civilian volunteers are bravely resisting the Russian army. But if EU sanctions exclude energy payments via Swift, it would be a glaring omission. Utilities in Germany would still be able to make streamlined payments to Russian energy giants such as Gazprom for the gas many Germans depend on to heat their homes.

The energy policy errors of politicians such as former chancellors Gerhard Schröder and Angela Merkel are returning to haunt them.

An energy payments carve-out would be consistent with western leniency towards Gazprombank. The US has hit other big Russian banks with sanctions far tougher than those applied to the financial services arm of the gas giant.

There is a disconnect in EU sanctions. On one hand, ministers are dithering over Swift. On the other, Ursula von der Leyen, president of the European Commission, has pledged with other Western leaders to freeze the assets of the Russian central bank.

On Friday one US sanctions expert had classified this as a move more radical than kicking all Russian banks off Swift. “The west may be reserving this as a sanction in case Russia starts menacing Moldova or Poland,” he said.

The failure of Russia to secure a swift victory in Ukraine is forcing the EU’s hand. Von der Leyen pledged on Saturday night to “paralyse” the Russian economy by moving against its billions of dollars of overseas assets.

Russia has planned for this, building defences against asset freezes on its central bank for years. Ten years ago, 90 per cent of its foreign exchange and gold reserves involved western counterparties or issuers, according to Sven Behrendt, of GeoEconomica, a German political risk consultancy. He estimates that less than 45 per cent of its estimated $622bn in ready funds now meets that description, using Russian data from earlier this year.

We can assume Russia’s central bank has been whittling down its exposure to western sanctions even further in recent weeks, buying gold, yen and Chinese securities. But it cannot insulate the Russian state from the unpredictable financial shocks widening sanctions may trigger. A further collapse in the rouble, capital flight and bank runs are all now on the agenda.

The Lex team is interested in hearing more from readers. Please tell us what you think of the EU’s stance on sanctions in the comments section below.