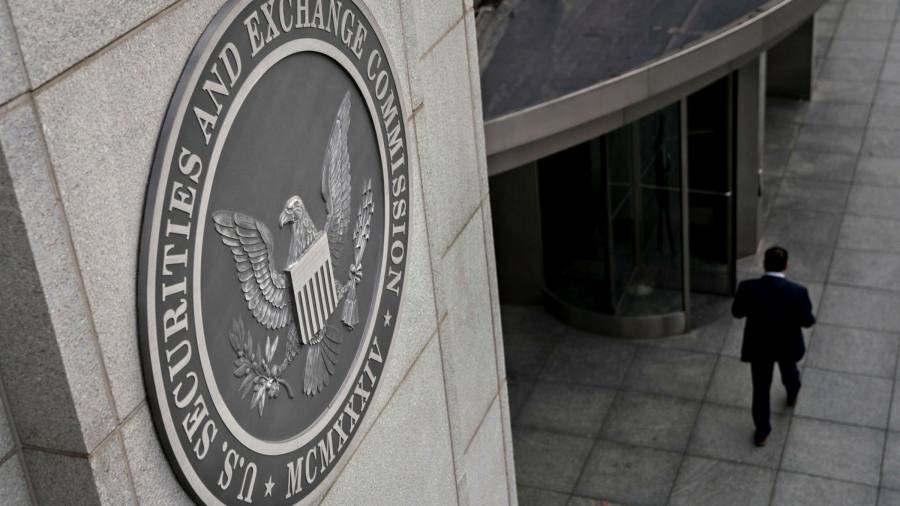 Wall Street’s top regulator is seeking to compel hedge funds and private equity groups to disclose quarterly performance and fees charged to investors, as the agency pushes back against activities it warned were “contrary to the public interest”.

The Securities and Exchange Commission on Wednesday voted in favour of a string of proposed rules that would require annual audits of private funds, ban certain fees that buyout shops charge and prohibit preferential terms for certain investors. The watchdog also advanced a proposal that would accelerate the time it takes for stock and bond trades to be finalised.

Strengthening regulation for private fund advisers is aimed at protecting investors as hedge funds, private equity groups and venture capital funds have amassed more than $18tn in gross assets, the SEC said. Its move comes at a time when big investors such as pension funds and endowments are racing into alternative assets — including real estate and infrastructure — as the outlook for returns in public markets dims.

“Private fund advisers, through the funds they manage, touch so much of our economy,” SEC chair Gary Gensler said. “Thus, it’s worth asking whether we can promote more efficiency, competition, and transparency in this field.”

The proposals are among the SEC’s strongest moves to increase oversight of fast-growing private financial markets since the passage of the Dodd Frank Act a decade ago, when US regulators took significant steps to bring hedge funds and private equity shops under their purview. The proposals, which will also require buyout firms selling assets from one fund to another to receive an independent financial appraisal, will now move to a public comment period before the rules are implemented.

“This is a path-breaking moment for the SEC,” said Andrew Park, senior policy analyst at Americans for Financial Reform, a progressive campaign group.

“They are making a concerted effort to get their arms around the massive growth of private markets especially over the past decade and to provide investors with the information they need to make sensible decisions,” he added.

The proposals would require registered private fund advisers to share quarterly statements with investors including detailed records of all fees and expenses — a point of contention in the industry — as well as performance.

SEC officials said material shared with investors varied widely, with most advisers falling short of the detail included in the new rules.

Gensler has called for more transparency around private equity and hedge fund fees, which he estimated to be approximately $250bn a year.

The agency is also seeking to prohibit practices “that are contrary to the public interest and the protection of investors” among all private fund advisers, even those not registered with the SEC. Procedures in question include charging fees linked to unperformed services, such as accelerated monitoring fees.

SEC commissioners last month voted in favour of proposed rules that would force hedge funds to report immediately when they suffer extreme losses or large investor withdrawals, in a bid to close gaps that were exposed by market ructions last year.

The commission is likely to face pushback from private equity firms, which have built a strong lobbying presence in Washington.

“It really is a shot across the bow for the industry,” said Adam Kanter, a partner at law firm Mayer Brown, who highlighted the SEC’s new proposed rules around general partnership-led secondary transactions and so-called “side letter” fee arrangements that firms negotiate with investors.

“It is targeting somewhat common practices,” said Kanter. He said he expected “to see some vigorous advocacy from the industry against some of these changes.”

The SEC also voted in favour of new rules that would cut the settlement period for trading in stocks, corporate bonds, mutual funds and exchange traded funds to one business day from two by March 2024. Investors and trade groups have been lobbying for this reform since the meme-stock frenzy took off last year.

Reducing the settlement window would free up funds that brokers are required to deposit at clearing houses to cover any potential losses before a trade is finalised, and Gensler argued the shift would reduce risk in the financial system.

The settlement process became a flashpoint last year when shares of GameStop surged, prompting a roughly $3bn early morning margin call by the National Securities Clearing Corporation on Robinhood, money the broker did not have. While the sum Robinhood was ultimately required to post was reduced, it raised concerns about the fragility of the market and dealers in times of stress.

The regulator also moved ahead with proposed rules that would require advisers and funds to report what it characterised as “significant” cyber security incidents to the SEC and clients.