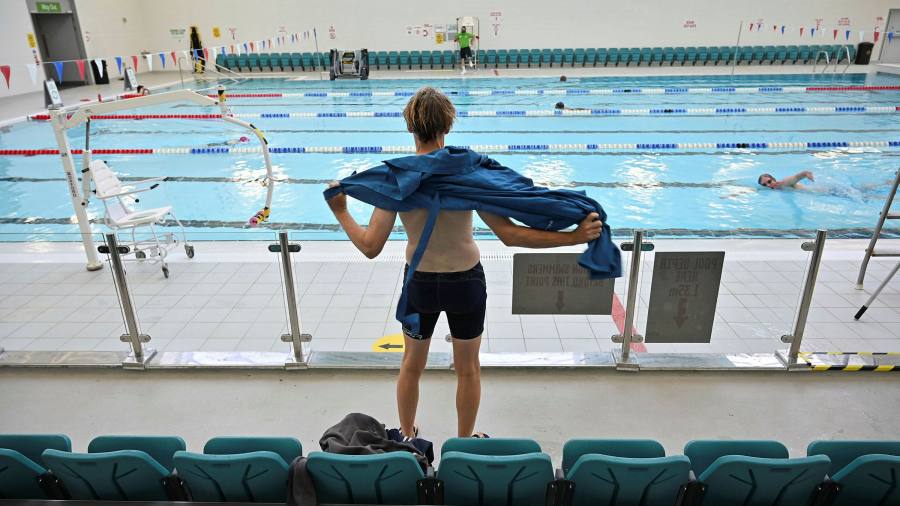 Swimming, the most popular physical activity in Britain, is at risk as soaring energy prices threaten the closure of hundreds of pools across the country.

It has led to desperate measures with gym and leisure centres lowering pool temperatures, turning down lights and urging swimmers to reduce showering times to save on energy costs to keep pools open.

With inflation hitting a 40-year high and little to help businesses in a government support package announced this week, swimming pool owners fear the sector could “collapse” in the next six months, said Huw Edwards, chief executive of industry association UKActive.

In a survey of nearly a third of the UK’s public pool operators this week, 85 per cent said they would be forced to reduce services in the next six months, while 63 per cent said they were likely to cut staff, according to UKActive, which promotes the interests of gyms and leisure centres.

Mark Sesnan, chief executive of leisure group GLL, which operates 135 facilities with public pools, said the energy crisis had created “a nightmare” and was “harder than the Covid challenge”.

Colin Waggett, chief executive of Third Space, a boutique gym operator in London, added the company was on a “week to week rollercoaster” as it tried to manage costs and maintain its high-end saunas, pools and spa facilities.

“If you offer a certain service and expectation, there is only so much you can do,” he said.

Even before the energy crisis, half of Britain’s 4,000-plus pools were under threat of closure, according to a pre-Covid-19 report by the country’s governing body Swim England.

With debts piling up following the pandemic and energy price rises of between 100 and 150 per cent since 2019, that closure number is likely to be much higher, said Swim England’s chief executive Jane Nickerson. “Every pool is at risk now,” she said.

It has prompted some gyms to trial a system that uses waste heat from data centres to keep pools warm. This diverts heat generated by data processing machines into swimming pool boilers.

Nickerson said this could be a “game-changer” as data centre owners could offer them to pools at no additional cost to their businesses.

Many swimming pool operators have already negotiated energy price rises with their local council backers, but anticipate further increases as “wet-side” activities that are typically lossmaking have recovered faster than gym or sports sessions, which would normally subsidise pools.

In the case of GLL, its energy bill has increased 125 per cent compared with 2019, meaning that it will be £15mn over budget on energy this year, chief executive Sesnan said. This is too much of a strain for a business that only turned a £3mn profit pre-Covid-19.

Consequently, GLL is considering introducing an energy surcharge of up to £1.50 on swimming prices to make up for shortfalls. “We’ve calculated that for every person who uses the pool, it is somewhere between £1 and £2 extra on the energy bill every visit.”

Many pool operators have also turned down air and shower temperatures, replaced old bulbs with LED lighting, ensured pool covers are used at night to retain warmth and improved lagging on pipes, but most say these measures only offer marginal gains.

Ivan Horsfall-Turner, chief executive of Freedom Leisure, which provides public sports facilities, said its energy costs had doubled, forcing the company to reduce temperatures of its swimming pools a 10th of a degree at a time to help customers acclimatise.

“We are still recovering from Covid in terms of getting our income and throughput back, so the last thing we want to do is put our customers off,” he said.

Some pool operators have medium term plans that involve investment in renewable energy sources such as ground source heat pumps and solar panels, but this requires capital that businesses emerging from long months of closure during Covid-19 and steep restart costs do not have.

Even gyms without pools are not immune. Alex Wood, chief financial officer of PureGym, said rising energy costs were “a challenging backdrop for everyone right now”.

James Balfour, chief executive of rival group 1Rebel, said he expected “a lot of consolidation” as inflation hit weak businesses. The fitness studio chain has bought two smaller companies out of administration in the last two months, he added.

But it is the swimming pool operators that are likely to be hit hardest, said Sesnan. Unless public swimming pools “get a subsidy from the government or the cost [of energy] comes down, it is inevitable that we will have to close”.

“You can always work out in a gym by opening the windows and turning the air conditioning off, [but] it’s an existential threat to swimming.”