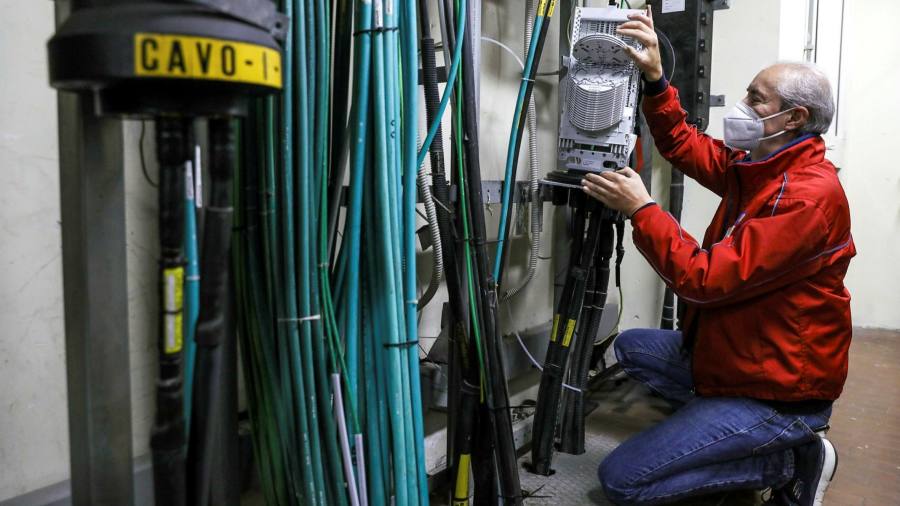 The deal with investors including state-owned CDP, Macquarie and US private equity group KKR comes after months of uncertainty over the future of Italy’s largest telecoms operator.

The sixth management shake-up in less than a decade follows three profit warnings in 2021 and a non-binding takeover offer by KKR, which was rejected.

The move, which would combine broadband with fixed network assets, is a coveted project in Rome.

The government hopes it will spur the rollout of ultrafast internet across Italy as part of a post-pandemic recovery plan that would upgrade the country’s digital infrastructure.

At the same time, Telecom Italia wants to reduce its enormous net debt of €17.7bn and increase profitability.

KKR’s offer in November of €0.505 a share valued the company at €10.7bn, a 45 per cent premium on the share price at the time, but about half the average paid by French conglomerate Vivendi to build its controlling stake in 2016.

The company’s share price was €0.29 on Monday morning, up 2 per cent on the day.

Chief executive Pietro Labriola was given the task of turning the company round after his predecessor, Luigi Gubitosi, stepped down over internal disagreements caused by the KKR offer.

Labriola proposed in March to split the group’s fixed network from all other assets including its mobile business and Brazilian unit.

Under the memorandum of understanding, signed on Sunday, Telecom Italia’s commercial assets would be split from its fixed network, which would be combined with Open Fiber.

State-owned CDP has been lined up to control the new entity, which will take on a significant part of Telecom Italia’s debt and staff in Italy.

The deal will become binding by the end of October, according to the statement.

Labriola said the separation of the fixed network infrastructure would give Telecom Italia the resources to invest in client and mobile services, while allowing it to compete more effectively on digital services, according to ANSA, Italy’s leading wire service.

A previous attempt to merge the networks, with Telecom Italia maintaining the controlling-stake, failed in 2020 over antitrust concerns and valuation issues.

KKR owns a stake in the company’s last-mile network and has joined the discussions between the operator and Italy’s CDP.

CDP is Open Fiber’s largest investor and owner of a 10 per cent stake in Telecom Italia. Macquarie is also an investor in Open Fiber after acquiring utility Enel’s stake for more than €2bn last year.

The final agreement will be subject to Italian and EU regulatory approval and approval of Telecom Italia’s board of directors.