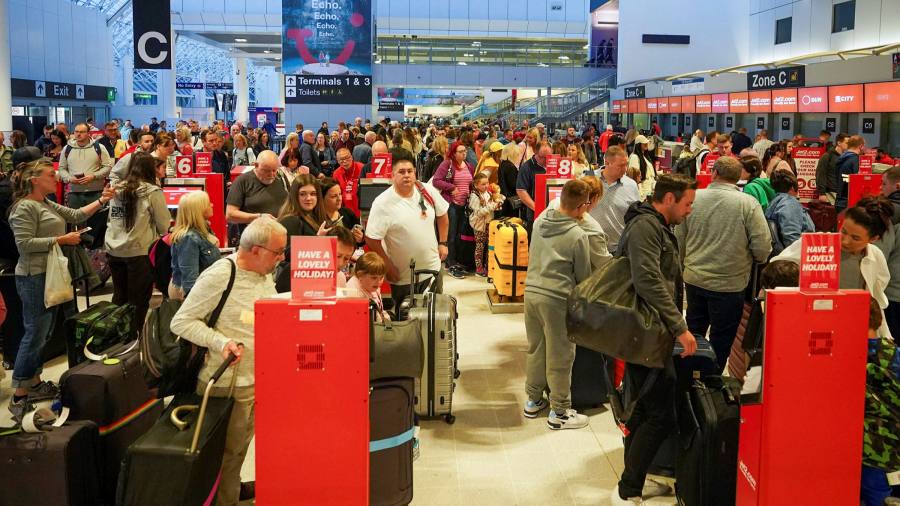 Ministers have blamed the travel industry for staffing shortages that have caused weeks of disruption at airports across the UK, with the pressure set to intensify during the busiest week for flying since the start of the pandemic.

Holidaymakers have complained in recent days of long queues at airports, flight delays and cancellations as companies struggle to find enough staff to handle the rapid rebound in demand for flying.

Airlines, airports and ground handlers fired tens of thousands of staff as the pandemic hit their businesses, and have faced mounting criticism for not rehiring people quickly enough this year. Hundreds of flights have been cancelled in the last week.

Lord Stephen Parkinson, the arts minister, said the government had “for many months” been urging the aviation industry to make sure it had enough staff to allow passengers to travel smoothly this summer as most coronavirus-related travel restrictions had been lifted across the UK and continental Europe.

“We have been saying to the industry for quite some time they should have been prepared for this,” he told Sky News.

“It is causing a lot of distress for people, particularly at half term, people with families and children with them. It is very distressing if you turn up at the airport and your flight isn’t ready.”

Manchester and Bristol airports have apologised to passengers for delays on Monday, while passengers flying on easyJet complained of shambolic scenes at London’s Gatwick airport over the weekend including cancellations and delays.

The pressure on the industry will intensify in the coming days as a four-day bank holiday weekend coincides with schools’ half-term.

Nearly 19,000 flights are scheduled to depart from UK airports this week, the most since the start of the pandemic in spring 2020, according to data provider Cirium.

John Strickland, an aviation consultant, predicted a “long summer of discontent” and said the only solution was for airlines to cancel flights well in advance to inject more reliability into their operations.

“The resolution of staff issues cannot be addressed quickly, and it is clear the problems exist in many parts of the world. Operational performance of many airlines and airports will be inconsistent as the peak season unfolds,” he said.

One industry executive said the staff shortages were particularly acute at ground handling companies, which are contracted by airlines to handle some operations, including check-in and baggage handling.

There has also been some “attrition” of staff finding jobs in other industries while waiting weeks for security background checks, the person said.

“Tory ministers can’t even get the basics right. They should show some responsibility, do their job, and take concrete steps to tackle the chaos growing on their watch,” she said. “They should tackle the huge delays in security checks hampering recruitment, work with unions and industry to address chronic low-pay, and cut the red tape contributing to huge delays at the ports.”

The aviation industry has held regular meetings with the Department for Transport to update them on the staffing issues, but there are no talks planned for this week, two industry executives said.

Unions said the industry was suffering the inevitable consequences of so many staff being sacked. “During the pandemic, when airline operators and others in aviation slashed jobs to boost corporate profits, we warned this corporate greed would cause chaos in the industry,” said Sharon Graham, general secretary of Unite the Union.