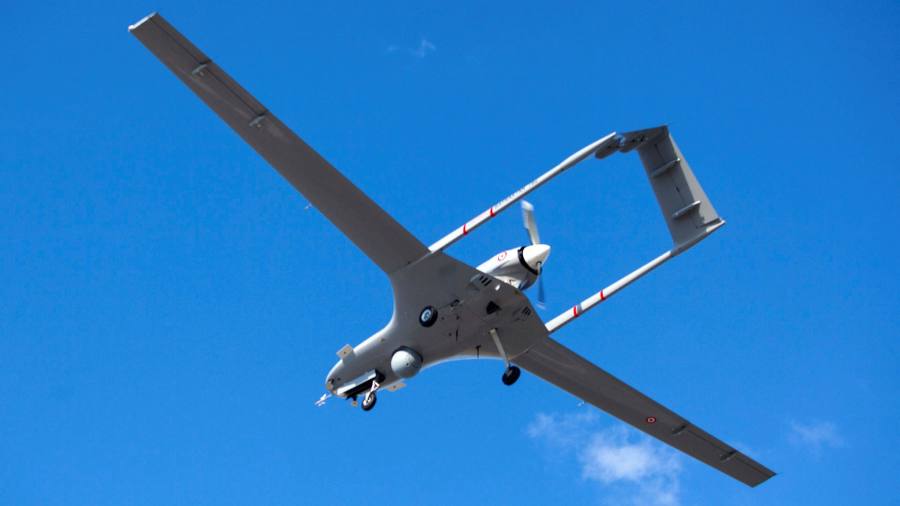 So popular are Turkish-made armed Bayraktar drones with the Ukrainian army that the weapons are celebrated in a song. “We took offence at these orcs. Russian bandits are made into ghosts by Bayraktar,” go the words to the tune posted on the land forces’ Facebook page.

The Ukrainian foreign ministry posted on Twitter an image of a police dog named Bayraktar, and a lemur born in the Kyiv zoo has also been named after the drones that have taken out Russian tanks and missile systems in recent days.

The glowing Ukrainian tributes contrast with Turkey’s efforts to play down the sale of the weapons to Kyiv, fearful of stirring Russian ire as it tries to carve out a role as a mediator in the conflict. It hosted the Russian and Ukrainian foreign ministers on March 10 for the highest-level diplomatic meeting between the two nations since the war began on February 24.

While other Nato members are supplying Ukraine with anti-tank weapons and missiles to help it withstand Russia’s attack, Turkey has depicted the sale of the unmanned aerial vehicles (UAVs) from a company co-founded by the son-in-law of President Recep Tayyip Erdogan as just another commercial transaction.

“This is not aid from Turkey. It is a product purchased by Ukraine from a company in Turkey,” Yavuz Selim Kiran, the deputy foreign minister, told the Daily Sabah newspaper this month, even as he praised the “game-changing” drones.

“The fact that it has become one of the Ukrainian military’s main deterrent elements actually shows the success and quality of the products produced by our company,” he said. “Everyone is waiting in line to buy the UAVs.”

Turkey’s caution reflects the complex alliance that Erdogan has crafted with Russian president Vladimir Putin. Ankara has bought advanced Russian missiles, outraging Turkey’s Nato allies, but it has backed opposite sides in Libya and Syria. Erdogan has condemned the invasion of Ukraine but opposes sanctions against Russia, upon which Turkey relies for tourism, wheat and most of its energy imports.

He has also deepened defence co-operation with Ukrainian president Volodymyr Zelensky. The leaders agreed last month to jointly produce a new generation of the drones, expanding on a 2019 deal for at least 20 UAVs from Istanbul-based defence company Baykar.

Baykar is run by Selcuk Bayraktar, a Massachusetts Institute of Technology-educated engineer who is married to Erdogan’s daughter Sumeyye, and his two brothers.

The pact with Ukraine is part of a broader “drone diplomacy” that has allowed Turkey to exert its foreign policy priorities and establish military partnerships with the dozen or so governments that have acquired or ordered the Bayraktar TB2 drone.

“It’s now a top foreign policy priority of Turkey to sell these. It’s one of their highest value exports,” said Aaron Stein of the Philadelphia-based Foreign Policy Research Institute. “For many countries, it’s the smart choice. It far exceeds the capabilities of its low-cost competitor from China, and the US and Israeli systems are for many just too expensive.”

Cheap to make and deploy, a TB2 costs about $5mn and has been battle-tested in conflicts spanning north Africa to the Caucasus Mountains, often on Russian-made equipment, as well as against Kurdish insurgents within Turkey. An Israeli Heron costs roughly $10mn, while US-made drones are $20mn or more. A Chinese unit can cost as little as $1mn, but its crash rate makes it less reliable than the TB2, experts report.

Demand for the aircraft has helped expand exports from Turkey’s defence industry by 40 per cent in 2021 to $3.22bn, according to the Turkish Exporters Assembly. Arms sales to Ukraine jumped 60-fold in the first two months of this year to $58.4mn, the figures showed.

The TB2 is Ukraine’s only armed UAV, carrying as many as four laser-guided munitions. “They’re incredibly valuable, precisely because they’re not valuable at all. If Ukraine can . . . keep buying them and running them up there, it is an incredible irritant” for Russia, Stein said.

The drones are unlikely to sway the outcome of what is largely a ground war with Russia. But Ukraine’s tactical use of the UAVs has acted as a “force multiplier”, giving the outgunned army opportunities to strike key Russian targets, said Can Kasapoglu, the defence programme director at the Istanbul think-tank EDAM.

Experts said the slow, low-flying TB2 is an easy target and will be increasingly contested as Putin’s forces secure control over Ukrainian skies. Moscow has already said it destroyed at least four Bayraktar drones and the base from which they were launched.

“Once the drones start being contested, they are going to start breaking down. So the air superiority Russia was counting on at the start of the conflict will be established,” said Mathieu Boulègue, a research fellow at the Russia and Eurasia programme at Chatham House.

Still, Kasapoglu says the main lesson other countries will take from the use of Turkish drones in Syria, Libya, Nagorno-Karabakh and now Ukraine is their effectiveness against Russian weaponry. Already, Poland has become the first Nato member to sign up, ordering 24 armed Bayraktar TB2s last year.

“I expect Nato’s eastern flank will quickly ‘dronise’ with Turkish equipment after the war in Ukraine,” Kasapoglu said.