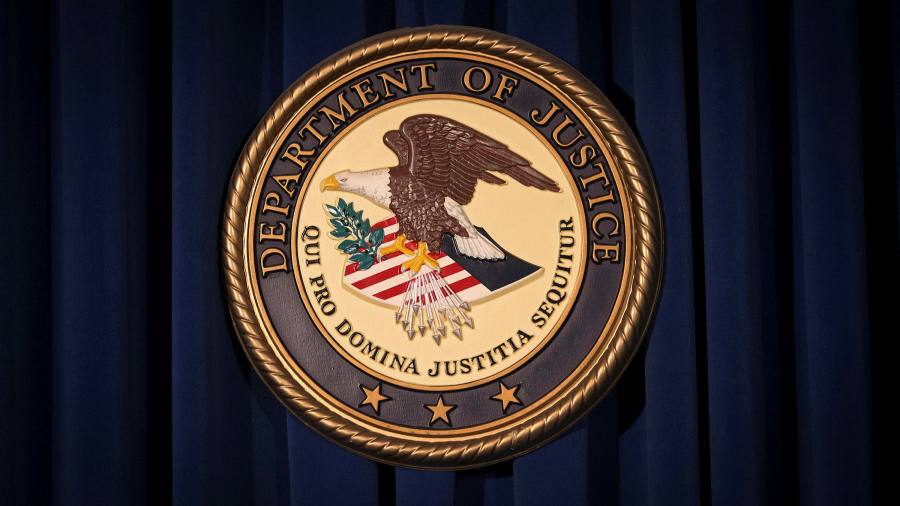 The US Department of Justice said banks, cryptocurrency exchanges and other financial institutions that serve Russian oligarchs under American sanctions will be in its “crosshairs”, detailing the agenda of a special task force set up to enforce sanctions in response to Moscow’s invasion of Ukraine.

A senior DoJ official on Friday said the “KleptoCapture” task force launched last week would take a broad view, looking not only at parties that knowingly help people under sanctions.

“Financial institutions, banks, money transmission services, cryptocurrency exchanges who wilfully fail to maintain adequate anti-money laundering policies and procedures and allow these oligarchs to move money . . . will be in the crosshairs of this investigation,” the official said.

The task force will also target accountants and lawyers who have aided sanctioned individuals.

“We’ll absolutely be investigating, targeting and where appropriate prosecuting individuals who are not themselves the oligarch . . . but who are happy to help conceal or facilitate, aid or abet either sanctions evasion in themselves or assist sanctioned individuals in committing any crime that we uncover in the investigation,” the DoJ official said.

The justice department is casting a wide net for its probe as it seeks to intensify the enforcement of US sanctions with the task force, which includes a broad set of law enforcement agencies such as the FBI and the US Secret Service.

“Actors who stick their heads in the sand or blind themselves to moving dirty money may face money laundering charges for their role in concealing those proceeds,” the DoJ official said, adding that individuals and entities “actively” assisting a sanctioned person to move assets would also be targeted.

Since the start of the Ukraine invasion, the US has imposed sanctions on large Russian banks, key individuals and the country’s central bank, a list that could grow further. Washington has also taken aim at critical Russian officials such as foreign minister Sergei Lavrov, defence minister Sergei Shoigu and President Vladimir Putin.

The US has also slapped sanctions on a few oligarchs including billionaire financier Alisher Usmanov, as well as some family members of Russia’s elite.

On Friday afternoon, the US Treasury department announced new sanctions on three immediate family members of Dmitry Peskov, the spokesperson of the Kremlin, as well as members of the management board of VTB, the Russian bank it sanctioned last month, and 12 Russian lawmakers.

The US Treasury also identified as “blocked property” a private jet and a yacht owned by Viktor Vekselberg, a previously sanctioned wealthy Russian businessman.

The DoJ official declined to specify or quantify assets targeted by the KleptoCapture task force, but said they would include holdings offering “attractive, often liquid or opaque ways” to hide or move capital quickly across borders, such as real estate, corporate shareholdings, aeroplanes, jewellery and artwork.

Crypto exchanges have come under pressure to block transactions with Russia as western officials fear digital tokens are being used to transfer money across borders while they seek to cut Russia out of the global financial system.

Trading between the Russian rouble and crypto assets including tether and bitcoin has surged since the start of the Ukraine invasion, doubling by the beginning of March, according to data from Chainalysis, a crypto research group.