Why banning directors is a feeble fallback, even at P&O 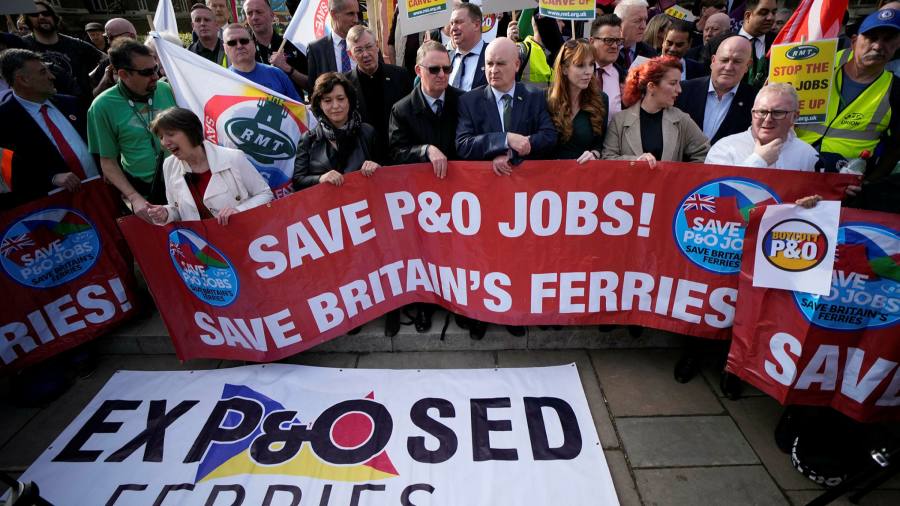 Depending on who you ask, P&O Ferries chief executive Peter Hebblethwaite has done an “amazing job” in sacking 800 workers, as the head of owner DP World said this week — or he has breached his fiduciary duties, is unfit to run the company and should be struck off as a director.

And therein lies the problem — at least for those demanding “something must be done” after the company in March unceremoniously dismissed its workforce without the consultation required under UK law.

The head of the TUC last week wrote to the Insolvency Service, which said in April that it has started civil and criminal investigations into the sackings, arguing that directors’ conduct had made them unfit to stay in post and should be disqualified.

We have been here before. After the financial crisis, there was a round of demands and inquiries into disqualifying directors of banks before, well, nothing very much happened. Powers to pursue individuals were toughened up for the financial sector. But more generally, the evidence that disqualification is going to be a successful sanction for dubious (or indeed unlawful) conduct is pretty feeble.

For a start, the power to strike off directors falls to the Insolvency Service, which as the name suggests, mainly concerns itself with failed businesses. Disqualifications under section 8, the relevant legal provision for a live business like P&O, are vanishingly rare, generally running at between zero and 2 per cent of the total each year.

Even when cases do concern insolvency, there is a tendency to go for lower-hanging fruit, like the failure to keep proper records, rather than more contentious issues, said one practitioner. Given the legal risk in taking cases to court, they are usually only pursued if the chances of getting a disqualification order are judged at better than 50 per cent, said another expert. It’s a slow process: Carillion’s directors have yet to be banned from holding board positions, nearly four and half years after its collapse.

The Insolvency Service, which is part of the business department, has proper investigatory experience and skills. But the number of directors disqualified doesn’t vary much over time, regardless of the backdrop for corporate skulduggery or failure. One possible conclusion: its resources effectively cap activity particularly for complex cases.

There is immense political pressure to act on P&O. The Insolvency Service can request extra funds for long-running investigations. But such cases, particularly for solvent companies, face a high bar: DP World’s Sultan Ahmed bin Sulayem said that the alternative was to “bring down the company”.

One suggestion made by the TUC is that P&O directors had breached their duties under section 172 of the Companies Act, which includes having “regard to” the interests of employees. But this has been a “largely symbolic feature” of company law rather than representing material legal liability, says Roger Barker from the Institute of Directors — one reason perhaps there is a vigorous campaign to update and strengthen it.

The bottom line is, according to Demetra Arsalidou, who researches corporate law at the University of Cardiff, that disqualification of directors “sounds good in theory but it does not really work”. Cases are hard to prove and, in any case, penalties are lacking and enforcement questionable.

The government has, meanwhile, unveiled its long-awaited audit and corporate governance package: already kicked into the legislative long grass, it does include more scope to regulate boards of directors in certain areas. But overall, the proposals were hugely watered down, including removing the idea of a UK-style Sarbanes-Oxley regime, amid concerns about burdensome regulation and the stifling of entrepreneurial spirit.

Similar concerns have previously done for attempts to overhaul the funding of the Insolvency Service, to give it more independence to pursue cases, and to efforts to establish proper professional standards and ongoing training requirements for corporate directors, according to people involved in past discussions.

Given the options of a really robust regulatory regime or a proper professional framework for corporate directors, the UK appears set, at least for now, to opt for nothing. Which, outrageously, could yet be the outcome at P&O too.