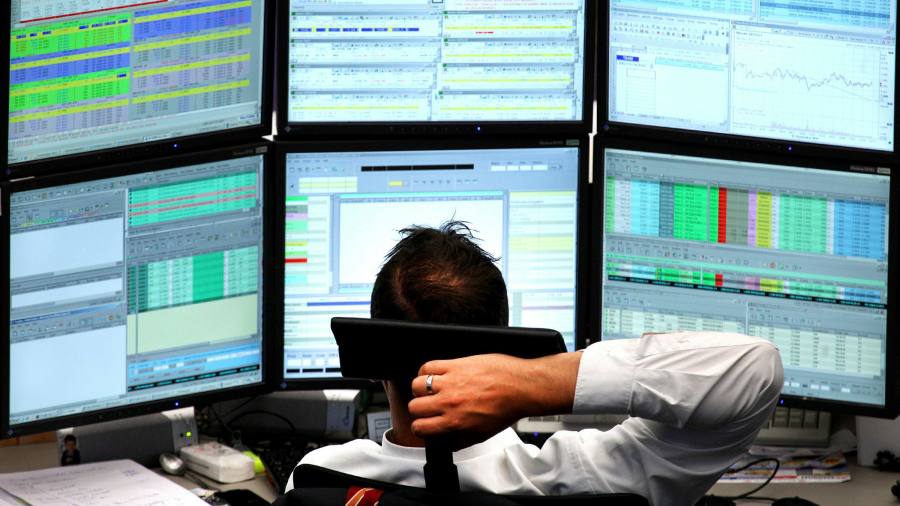 On Wednesday the Commodity Futures Trading Commission hosted an industry roundtable to discuss FTX’s proposal for a new derivatives risk management framework. Inadvertently, someone dropped a bombshell about the market turmoil of March 2020 that has triggered a spasm of speculation at FTAV Towers.

Most of the day’s chatter was naturally focused on FTX’s Sam Bankman-Fried, unusually dressed in a suit for the occasion. The FT’s Gary Silverman and Philip Stafford wrote a good piece on FTX’s proposal. But @Mechanicalmarkets on Twitter highlighted an overlooked comment from ICE’s Chris Edmonds, the exchange group’s chief development officer:

Naturally, the conversation had wandered far and wide, and Edmonds reacted to the earlier insistence from some earlier commenters that “defaulter pay” — ie when someone misses a margin payment they’re instantly in default and their collateral is forfeit. That’s how the system works in theory, after all. No tears, etc.

Here is the crucial bit, with FT Alphaville’s emphasis below. The Gerry referred to is Gerry Corcoran, the chair and chief executive of RJ O’Brien, a mid sized futures brokerage. Chris is Chris Perkins, the president of crypto outfit Coinfund (and running Citi’s clearing unit in the pandemic turmoil).

Dave is Dave Olsen, the president of Jump Trading, who was at the roundtable representing the FIA Principal Traders Group.

. . . On Chris and Dave’s point around the idea of ‘defaulters pay’. I get that. Love that, right. And that works really well for guys who are in big shops, because they never default. They want to tell you they never default. And we’re just going to call that out at the moment. At the beginning of the pandemic — I’m not going to name the person, but they’re in the room – there was a technical issue. Point: he doesn’t have to worry about that in the proposed model, right, that’s not there. But it would’ve been cataclysmic at that moment in time. We knew the issue, to Gerry’s point about know-the-customer. We knew where it was. And we chose to give the appropriate amount of time not to dislocate the market and create a bigger stress on that.

So for us at the end of the day, it’s our job to do no harm. It’s our job to hold everyone. It’s the question of when you’re calling the default. There are lots of examples in history that many of us around this table have lived around and now’d say, you know, “I think they’re in default.” Gerry may say “nope they’re not in default,” at that point. And that consensus when that default takes place, we react pretty well.

But I had the keys to the castle at that point in time, and it would’ve been a very bad day. And that person sits in this room, and they know exactly who I’m talking about.

FT Alphaville has heard rumours that the clearing system creaked more than authorities have let on, but this is the first time someone in the know has indicated it was near breaking point.

And make no mistake, it was. According to the BIS, the daily collective demands from clearing houses for variation margin, an insurance to protect against fluctuating market prices, rose to $140bn compared to just $25bn a few months earlier. That’s an awful lot of money to find when markets are in wild convulsions.

Assuming Edmonds is not talking about some of the random pencil-pushers at the back of the room, but presumably aiming his comments at the people round the roundtable, he is implying that a fairly significant US financial institution would have defaulted on payments in March 2020 if ICE had been pernickety about the rules.

Here is the full list of the roundtable representatives. (NB, David Murphy from the London School of Economics is left off the image below.)

Trading industry vet Jamie Selway pointed out on Twitter that it was likely related to credit default swaps, given the mess in corporate debt markets in March 2020, ICE’s heft in the area and Edmonds’ job to oversee it.

It’s the most likely answer, although we note that ICE also runs the Brent futures contract, and Saudi Arabia’s decision to provoke an oil price war sent crude and stock prices tumbling on March 8. That week alone, clearers demanded $55bn of variation margin from banks, well in excess of the $31.5bn collected right after Brexit.

And Edmonds pointed out that it was a technical issue, which admittedly covers many things but it indicates the unnamed party probably had the money but had difficulties paying on time. ICE clearing house rules give members an hour to pay up after receiving a special variation margin demand, which can get issued in volatile periods. One day a bank had to find nearly $10bn in 60 minutes. And yes, that did require a call to the CEO for authorisation.

ICE’s rival CME Group, trade bodies like ISDA and the assorted academics can be excluded. Edmonds’ comments about “big shops” implies that it wasn’t one of the smaller outfits, like CoinFund. Edmonds using the pronoun “he” is another clue. Big asset managers like BlackRock and Fidelity are unlikely, and aren’t members of ICE Clear.

So our admittedly half-arsed Sherlock Holmes deductions suggests it was probably a prop trader/market maker or one of the big banks — Citadel, Citi, DRW, Jump Trading, Morgan Stanley and Virtu — as the main candidates fitting the bill. If Edmonds was deliberately trying to obfuscate things with the “he” pronoun we can throw JPMorgan and Goldman Sachs into the mix as well.

Now, this is obviously ancient history, and we may be getting overly excited about some throwaway comments. Perhaps Edmonds was referring to some of the wallflower people in the room, rather than any of the headline acts. Nevertheless, for us it highlights two interesting and still-relevant points.

Firstly, that human judgment can still be valuable — even essential — in fast-moving markets (despite the LME’s heroic efforts to single-handedly tarnish the reputation of discretion). Edmonds pointed out that he knew the culprit and there was a wider context of not adding to the market chaos at the time. Obviously all the companies at the roundtable are still around, so clearly it worked out.

Secondly, in their gleeful bashing of central banks a lot of people seem to have forgotten how close we came to a financial cataclysm two years ago, on top of a pandemic and economic depression.

There is for sure a debate to be had about when the Federal Reserve et al should have pivoted their stance more forcefully to tackle inflationary pressures, and what they should and shouldn’t do now. But it is good to remember how dicey things got in March 2020, and the role that aggressive (human) intervention played in forestalling a financial disaster.