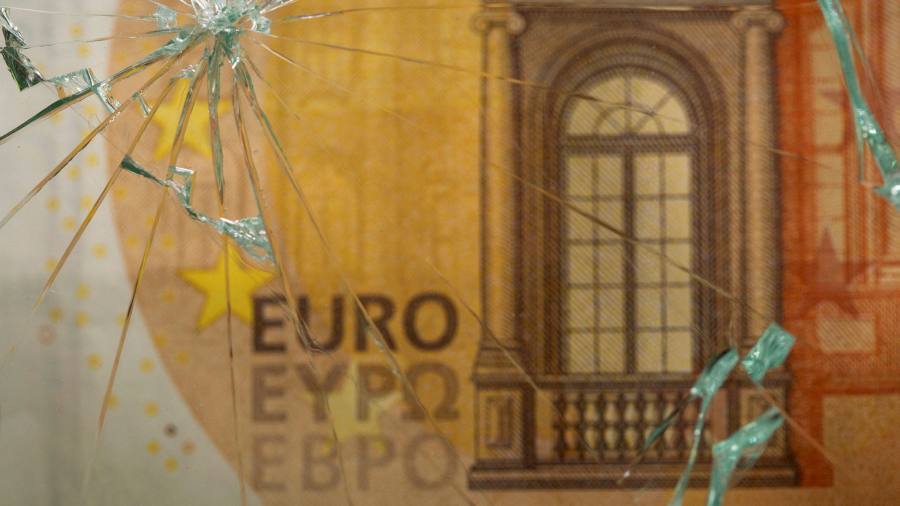 We’re now two weeks into the war in Ukraine and its ripple effects are being felt globally — including on Europe’s single currency. With the European Central Bank’s governing council meeting today in Frankfurt, we’ll look at why the euro depreciation is a matter of concern and what economists expect to happen in terms of monetary policy.

Later in the day, EU leaders will gather in Versailles for a two-day summit revolving around the bloc’s response to the war, France’s ambitions for EU defence and how to pay for priorities including energy security. One topic central and eastern members insist on discussing is that of Ukraine’s EU membership — as the foreign minister, Dmytro Kuleba is pleading for in this Financial Times op-ed. Kuleba will be meeting his Russian counterpart for the first time since the war started, in Turkey today.

Meanwhile as the FT reported first, the EU added 14 more Russian businessmen with close links to the Kremlin and 146 lawmakers to its asset freeze and travel ban list and expanded its financial sanctions to Belarus.

With more financial aid to Ukraine being pledged by several international financial institutions — we’ll hear from Odile Renaud-Basso, president of the European Bank for Reconstruction and Development, about her plans for the country.

And in more signs that the Covid-19 pandemic has been relegated to the prewar era, we’ll bring you a dispatch from Strasbourg, where the European parliament is returning to business as usual and ending its remote voting system.

This article is an on-site version of our Europe Express newsletter. Sign up here to get the newsletter sent straight to your inbox every weekday morning

The euro has become a focal point for investor angst about how the fallout from the war in Ukraine will hit the European economy, writes Martin Arnold in Frankfurt.

The single currency fell close to a five-year low against the US dollar after Russia’s invasion of Ukraine, before regaining some ground in recent days.

The depreciation of the euro will be a concern for the European Central Bank, which meets today to discuss monetary policy and issue new economic forecasts.

While a weaker euro is a boost for eurozone exporters, what worries the ECB is that it will add to already record levels of inflation by pushing up the cost of imports, particularly for dollar-priced oil and gas.

Spyros Andreopoulos, a senior European economist at BNP Paribas who used to work on monetary policy at the ECB, said the drop in value of the single currency had “raised the question of whether the ECB could intervene in foreign exchange markets to shore it up”. Poland, Hungary and the Czech Republic have already intervened to support their currencies.

However, Andreopoulos said the most the ECB was likely to do was verbal intervention. “They can talk about how the exchange rate is a factor affecting the inflation outlook,” he said. “But when it comes to direct intervention in foreign exchange markets, the bar is very high, in our view.”

The last time the ECB intervened in foreign exchange markets was in 2011 to stabilise the currency after the Japanese tsunami. It intervened more heavily when the euro fell below parity with the dollar shortly after its launch in 2000, but this had limited success.

After falling to a 22-month low of just above $1.08 at the start of this week, the euro has since rebounded to $1.11 as investors focused on reports that the EU could raise more debt to finance extra investment on energy and defence by member states.

Despite its recent rally, the single currency remains well below the levels of around $1.15 it reached a month ago. One factor putting downward pressure on the euro is the expectation that Europe will be hit harder than the US by the Ukraine crisis, mainly because of Europe’s greater reliance on Russian oil and gas imports.

The US Federal Reserve is expected to raise interest rates this month, which could drive the euro down further against the dollar, especially as most analysts think the Ukraine crisis could delay an ECB rate rise until at least next year.

“Market participants also see rate hikes as a way to limit the depreciation of the euro, which is only adding to imported inflation,” said Frederik Ducrozet, a strategist at Pictet Wealth Management, adding: “We doubt that the ECB could act alone to support the currency in the event of further market disruptions.”

The US alone is this week due to consider a $12bn spending package for Ukraine, with $4.8bn dedicated to defence spending. Adjusted for inflation, that roughly equates to the landmark $400mn package the US provided Greece and Turkey in 1947 in a move that marked the start of the US’s cold war policy in Europe and, two years later, the foundation of Nato. (More here)

The chief of the European Bank for Reconstruction and Development has warned of a “major shock” emanating from the Ukraine crisis as she announced a support package of €2bn for the country and others directly surrounding it, writes Sam Fleming in Brussels.

Odile Renaud-Basso told Europe Express that the consequences of the crisis are now being felt well beyond the immediate neighbourhood of Ukraine and across the body of countries that the bank serves. The EBRD operates in regions including central and eastern Europe, north Africa, and central Asia.

Symptoms of the strains from the crisis include currency depreciations and rising borrowing costs for some emerging markets, the bank’s president said. Among the key drivers of the economic damage are rising energy prices, surging food costs driven in part by fears of interruptions in grain exports from Russia and Ukraine, and surging costs of other raw materials including metals.

“We can see that this war has a very dramatic and huge impact on Ukraine but it will have wider repercussions worldwide and in particular in our countries of operation,” she said. “We will do as much as is needed and as much as we can in order to support the country and the region.”

Renaud-Basso spoke after the IMF yesterday approved $1.4bn in aid to Ukraine. “This is a vital step to help the authorities get through the devastating effects of this war,” tweeted managing director Kristalina Georgieva.

The World Bank also this month said it was mobilising support of more than $700mn for Ukraine, which comes on top of a €1.2bn macrofinancial assistance package from the EU and other pledges of financial support.

Renaud-Basso said that there was now a “huge” amount of financial support in place because of the war in Ukraine. “Whether this will be enough I cannot judge at this stage,” she said.

The EBRD this month proposed the formal suspension of any access to its resources and expertise by Russia and Belarus.

Asked if there were discussions about ejecting the countries from its register of government shareholders, Renaud-Basso said there was a broader question facing the international community of how to deal with the two countries’ memberships in international institutions.

The European parliament is the latest institution to declare the Covid-19 pandemic over. A majority of its political parties agreed to end hybrid plenary sessions from next month and require members to be present to vote, writes Andy Bounds in Strasbourg.

MEPs have been able to meet — and vote — virtually since the pandemic hit in early 2020. While committees can carry on with this system, the conference of presidents, which consists of the leaders of the political groups, agreed to enforce a physical presence from April.

The Greens voted against, arguing that the vulnerable and recent mothers who do not want to leave their babies could be disenfranchised, and that 705 MEPs commuting to Strasbourg again will drive up the institution’s carbon footprint.

One parliamentary insider also said there was considerable pushback from MEPs coming from more distant member states. “They have got used to the time saving and spending more time with their constituents.”

A spokeswoman for the centrist Renew group said it would consider opt-outs in limited cases but “we need to get back to normal. You cannot conduct negotiations on Zoom as you can over a coffee.”

Véronique Trillet-Lenoir, an MEP with France’s En Marche party and medical doctor, said the time had come to meet face to face again. “The name parliament comes from parler and we need to come together to talk again,” she told Europe Express.

Not that the pandemic has stopped dealmaking. Indeed after more than 15 years, parliamentary groups yesterday reached a deal to have transnational MEPs. As of the next legislature, 28 seats could be allocated based on voting by the entire EU population aged 16 or above, provided this is approved unanimously by member states.

Chances are, this could happen — since Brexit freed up 46 seats for the 2024 elections so national countries will not have to sacrifice seats to the European cause. Several national governments including in France and Germany have already embraced the plan.

Even if we decide to pretend that part of the debt doesn’t exist, it still exists and still needs to be financed, and markets will still want to know how it’s going to be financed