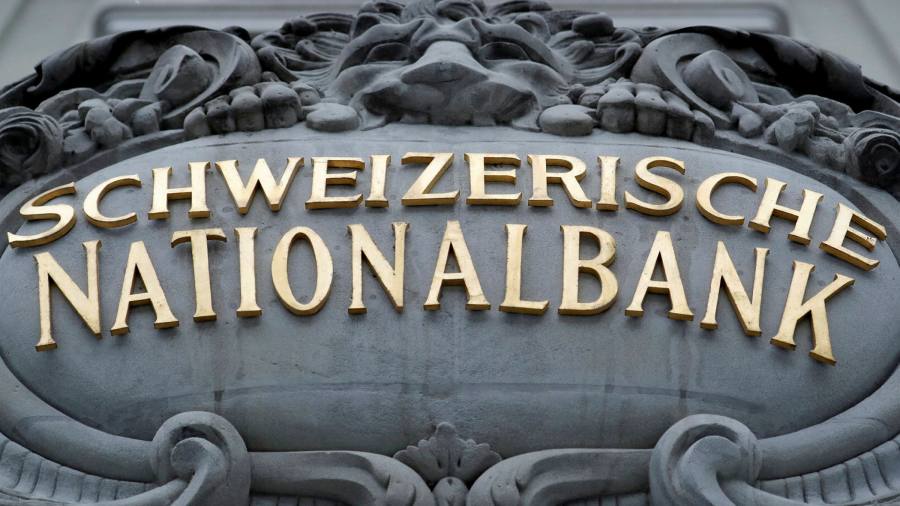 Meyrick Chapman is the principal of Hedge Analytics and a former portfolio manager at Elliott Management and bond strategist at UBS.

The Swiss National Bank has long been coy about exactly how it allocate its mammoth $1tn stash of foreign currency reserves. But the last few months have undoubtedly been rough.

The returns from its stock investments are likely terrible, but the losses in bonds are probably even worse. From the Swiss sovereign wealth fund central bank’s own breakdown of asset classes and currencies, and the 13F form it has to file for its US equity portfolio, I estimate its losses so far this year may come to around Sfr75bn ($78bn), or roughly 10 per cent of Swiss GDP.

Even so, nobody should spend much time worrying about it — least of all the SNB.

Some background on how this all happened. The SNB’s policy has been quite different to that of central banks elsewhere, even though its approach has resulted in the same explosive balance sheet growth.

The expansion has been startling. Before Lehman’s bankruptcy and the eurozone sovereign debt crisis that followed, the SNB’s reserves stood at just Sfr80bn. Today, the Swiss central bank’s foreign currency reserves come to just over Sfr1tn, or $1.04tn.

Central banks like the Federal Reserve, European Central Bank, Bank of Japan or the Bank of England purchased assets to boost liquidity in their own economies. These buying sprees were funded by issuing new money, which in turn was credited to the banking system as reserves.

In contrast, the twelve-fold increase in the SNB’s reserves is the result of its fight against manic Swiss franc appreciation. Swiss investors returning home and foreigners seeking a sanctuary from the eurozone mess pushed up the currency that many saw as the ultimate ‘safe haven’. A distinctly Swiss version of quantitative easing was born; newly created Swiss francs were sold to those clamouring for them and the proceeds used to buy foreign assets.

The SNB’s first choice was to buy European bonds. But as demand for Swiss francs went nuts, the SNB had to look further afield, buying bonds and equities in the US and elsewhere. Foreign demand for Swiss currency was thus converted in SNB assets.

Did this make Switzerland wealthier? Yes, a bit, which is part of the story that follows. For the most part though, the inflows of deposits created a liability which SNB policy was designed to offset with overseas assets. The aim was to keep the franc from rising further, not to make money.

The SNB continued to buy foreign assets throughout the first quarter, and may buy more if pressure on its currency continues. Sight deposits at the central bank — a key measure of demand for Swiss francs — rose again after the invasion of Ukraine as demand for the Swiss currency rose, briefly lifting the franc to parity with the euro in early March, and more purchases may come.

At its meeting that month the SNB said (our emphasis below):

The SNB is retaining its expansionary monetary policy. It is keeping the SNB policy rate and interest on sight deposits at the SNB at −0.75% and is willing to intervene in the foreign exchange market as necessary, in order to counter upward pressure on the Swiss franc. In so doing, it takes the overall currency situation and the inflation rate differential with other countries into consideration. The Swiss franc remains highly valued. Russia’s invasion of Ukraine has led to a strong increase in uncertainty worldwide. Against this backdrop, the SNB with its monetary policy is ensuring price stability and supporting the Swiss economy.

Buying foreign assets therefore looks set to remain a policy priority for the SNB for the foreseeable future. After all, broadly speaking, the policy has worked.

The SNB did, however, make money because the assets they bought rose in value. In fact it has made a lot of money.

If bond prices fall as much in the second quarter of 2022 as they did in the first quarter, the SNB will have an uncomfortable first half year, with losses in the region of Sfr120bn (16 per cent of GDP) possible if equities don’t recover.

Yet the reality is that the SNB’s longer-term gains in the stock market far exceed both the losses on bonds and the paltry returns offered to Swiss depositors. While central banks like the BoE and the Reserve Bank of Australia may have to acknowledge big losses on their QE portfolios, the SNB is probably sitting pretty.

I estimate that its investment profit was approximately $90bn by the end of 2021. Purchases since then have spoiled things a little, but they probably retain a profit of roughly $65bn. This hefty gain constitutes a big cushion, and the reserves themselves were created out of thin Swiss air.

After all, the SNB is legally constrained to paying a maximum dividend of 6 per cent, so it couldn’t easily give away its profits. Instead, it has increased its provisions in line with its assets since 2010. That marks the SNB out from other central banks, who carry relative thin provisions which may be quickly eroded as ‘quantitative tightening’ evolves. The overall mathematics of the transactions look reasonable.

Plus, the logic of markets seems to favour the SNB. Losses on bonds and equities are usually associated with a rise in the dollar, which while it hurts their foreign currency reserves shows the overall strategy may work, at least to some extent, in both directions. When the Swiss franc rallies their reserve assets rise in value, when their reserve assets decline, the Swiss franc reverses its unwanted appreciation.

The SNB therefore won’t be losing much sleep over their losses. It turns out to that it’s good to be loved by investors.