Inside the low-profile firm behind Boehly’s buyout of Chelsea 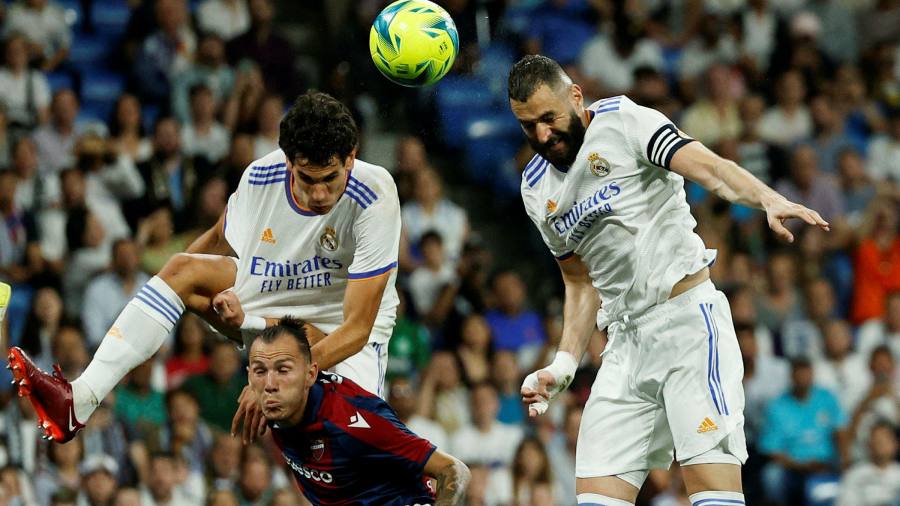 A very good Champions League final morning to one and all — later this evening, English Premier League runners-up Liverpool FC will meet La Liga titans Real Madrid for the most coveted cup in European football. Before the action kicks off at 9pm Paris time, we recommend this brilliant magazine dispatch from our man in Madrid, Simon Kuper, on the particular trappings of madridismo, or Real fandom.

In the meantime, we have an explainer from US private capital correspondent Antoine Gara on the real muscle behind the American acquisition of Chelsea FC, and a deconstruction of the recent rout in crypto markets and what that means for firms’ booming sports sponsorships. Do read on — Sara Germano, US sports business correspondent

Send us tips and feedback at [email protected]. Not already receiving the email newsletter? Sign up here. For everyone else, let’s go.

Bigger than Boehly: the back-story on Chelsea acquisitor Clearlake Capital

Todd Boehly is the new US financier set to become a mainstay on the backpages of Fleet Street newspapers after being the frontman on the £4.25bn purchase of Chelsea FC from Russian oligarch Roman Abramovich.

Though Boehly’s name headlines most coverage of the mega-deal, the money mostly comes from his partner, Clearlake Capital. The private equity firm’s funds are contributing over 60 per cent of the deal’s equity and hold equal ownership rights.

While Boehly’s conglomerate Eldridge Industries is an investor in high-profile entertainment businesses like newspaper The Hollywood Reporter, film production house A24 and the Golden Globe Awards, Clearlake has kept a lower profile in becoming a powerhouse on Wall Street.

Co-founded in 2006 by billionaires José E. Feliciano and Behdad Eghbali, Clearlake is one of the fastest-growing buyout firms in the world with a strategy of buying niche industrial, consumer and software companies and growing them by bolstering profits and striking acquisitions.

It manages more than $75bn in assets, of which $25bn was taken in over the past year. Since 2020, the firm’s deal machine has kicked into overdrive, striking more than 100 acquisitions, becoming one of the most active buyers of midsized companies in the US.

Feliciano, a native of Bayamón, Puerto Rico, came to the US in 1990 to study engineering at Princeton. Eghbali’s family left Iran for California in 1986 and he studied business at the University of California, Berkeley. The two met in the mid-2000s and formed Clearlake just ahead of the 2008 financial crisis with a strategy to pivot between buyouts and distressed debt investments depending on economic conditions.

Their connection to Boehly came as they worked to expand a burgeoning credit business inside of Clearlake.

Boehly was shopping his firm’s debt manager, CBAM, and a bidding war between private equity giant Carlyle Group and Clearlake resulted. Though Clearlake flinched at the final $799mn sale price, Feliciano and Eghbali grew close to Boehly who was looking for a financial partner to bid on Chelsea, a team he’d been looking to buy for years.

Clearlake will be an active co-owner, seeking to expand Chelsea’s reach globally through new media and technology investments, sources familiar with their thinking have told Scoreboard. To accelerate this growth, Clearlake also may bring in specialised financial partners in areas like media distribution.

What the dotcom era can teach us about crypto and sport

On November 17, 2021, cryptocurrency platform Crypto.com announced the exchange would take over the naming rights to Los Angeles’ iconic downtown stadium, formerly known as the Staples Center. The deal, worth $700mn over two decades, landed near the peak of the crypto boom: total circulating value of eligible assets tracked by the FT Wilshire Digital Asset Index topped $3.2 trillion just a week prior.

Fast-forward to today, and the value of those cryptocurrencies have fallen nearly 60 per cent to $1.3tn, hastened by the collapse this month of some once-staid “stablecoins”. Those setbacks have especially exposed the sports industry, the locus for dozens of ads, fan tokens, and athlete and league partnerships generated in 2021, as chronicled in an in-depth FT feature here.

Despite the rapid pullback of coin values, committed sponsorships like that for the home of the Los Angeles Lakers aren’t thought to be in peril (it was, after all, paid in cash, as Crypto.com chief executive Kris Marszalek told the FT). Rather, as some industry experts tell Scoreboard, the boom in crypto sponsorships of sport assets mirrors previous niche-industry expansion.

From 2020 to 2021, crypto marketing spend on sports sponsorships — stadium deals, league and athlete partnerships, and so forth — ballooned from less than $50mn to more than $600mn, according to Lou Kovacs, president of marketing in North America for advertising and talent agency Octagon. Such a rapid scale-up is typical for the “land-grab stage” for an emerging industry like crypto, and historical examples include the dotcom boom of the early 2000s and the explosion in daily fantasy and sports betting platforms in the US in recent years.

During that stage, sponsoring firms splash out to catch as many eyeballs as possible, and the sports industry is a frequent target given the broad and voluminous fan bases and the desirable demographic profile of sports fans (especially young adults). What comes next in these marketing life-cycles, said Kovacs, is a period of “retrenchment”, where firms refine their advertising to focus on engagement.

“That’s not always necessarily driven by declining values [or] declining stock price”, said Kovacs, who said such a pullback hasn’t yet begun in the crypto-sports space.

But does the pareback in crypto values carry risk for big stars, like basketball champion Kevin Durant, who have been eager to lend their name and image to digital currencies? “Part of being bullish on a new sector is not necessarily being committed to thinking that it’s like a rocket ship with one trajectory”, said Rich Kleiman, business partner of Durant and co-founder of Thirty-five Ventures, their firm which invested in Coinbase in 2017. He pointed to Friendster and MySpace compared to Facebook, in earlier iterations of the internet to highlight how fortunes can diverge.

There was a time when AC Milan dominated global football. Over two decades starting in the 1990s, under the management of Arrigo Sacchi first and later Fabio Capello and Carlo Ancelotti the Italian football team went on to win trophy after trophy domestically and internationally. The magic years came to an end in 2011, after Zlatan Ibrahimović and his teammates won Italy’s Serie A title for the last time — until last week.

“Ibra”, who had since toured the world playing for Paris Saint-Germain, Manchester United and the LA Galaxy, made a comeback in 2019 after AC Milan had touched the lowest point in years, losing 5-0 to Bergamo’s Atalanta. Last Sunday, the impossible became true. AC Milan isn’t the magic club it once was but a group of youngsters led by a 40-year old Ibrahimović returned Italy’s fallen star back to the top with an unexpected Serie A title. Here is Zlatan’s speech to the team in the dressing room reliving the journey that ended the winning drought.

Scoreboard is written by Samuel Agini and Arash Massoudi in London, Sara Germano, James Fontanella-Khan, and Anna Nicolaou in New York, with contributions from the team that produce the Due Diligence newsletter, the FT’s global network of correspondents and data visualisation team