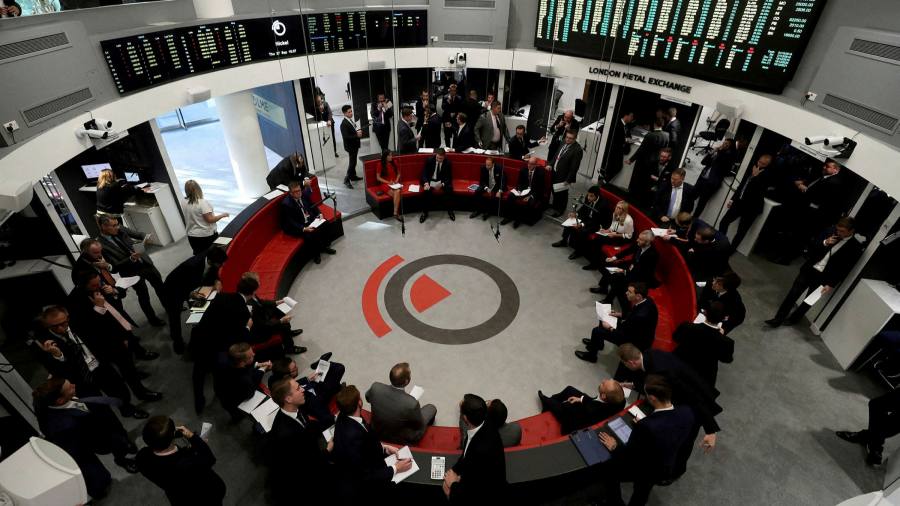 The London Metal Exchange suspended electronic trading in nickel on Wednesday, just moments after the world’s main market for the metal reopened for business following a week-long shutdown.

The fresh trading halt came after the price of nickel tumbled when the market opened. Newly installed curbs to support the resumption were meant to prevent the price from declining by more than 5 per cent, but a handful of trades breached the limit of $45,590 a tonne, according to Refinitiv data.

That forced the LME to halt electronic trading just after 8am on Wednesday to “investigate” the problem while telephone dealing and business around the famous red sofas of its Ring venue continued, although prices there also dropped by the 5 per cent limit. The market reopened for a second time at 2pm.

The chaotic resumption of business is a further embarrassment for the LME, which sets global reference prices for industrial metals. The exchange has faced fierce criticism of its decision to suspend the market last week following a significant short squeeze.

“The scale of sell orders is illustrative of the mood in the market — longs just want to get out of a market that has become and is likely to remain dysfunctional,” said Alastair Munro of brokerage Marex in a report.

Wednesday’s bungled restart follows one of the most dramatic episodes in the 145-year history of the LME. Last week, several smaller LME members came close to failing after the price of nickel surged 250 per cent in two days. The sharp rally was caused in large part by Xiang Guangda, the tycoon behind Tsingshan Holding, China’s leading stainless steel group, who struggled to meet demands for extra cash on a huge bearish bet that backfired.

The LME suspended trading after the price surge on March 8 and cancelled several hours of trades, triggering a furious backlash from hedge funds and electronic traders.

The exchange decided to resume trading — with price limits — after Xiang reached a deal with his banking counterparties to avoid further margin calls. Tsingshan has said it will reduce its short position in a “fair and orderly manner as abnormal market conditions subside”.

Reports from state-backed media in China on Wednesday claimed Tsingshan had struck a deal with two companies to swap its lower grade nickel products with a purer form of the metal that can be used to close its short position on the LME.

“Everyone knew the contract would be limit down immediately,” said Colin Hamilton, an analyst at BMO Capital Markets. “You would have thought the LME and providers would have run a few tests for that scenario.”

Later on Wednesday, the LME said it would increase the price limit for Thursday’s session to 8 per cent from 5 per cent.

Nickel is used to make stainless steel but its fastest-growing market is in the batteries that power electric vehicles. Tesla’s chief executive Elon Musk has said nickel is the metal that he worries most about.

Russia is a big producer of high-grade nickel, which is used in batteries, and traders have been concerned that supplies could be disrupted by western sanctions on Moscow.

The price fall will be a relief for Xiang, who was facing billions of dollars of potential losses on his bearish bet, which he started building last year as the price of nickel surged because of the war in Ukraine.

However, it is likely to irritate investors who were sitting on big profits last week, only to have their trades cancelled. On the day nickel was suspended it doubled to a record high above $100,000 a tonne.

Don Wilson, one of the world’s biggest derivatives traders, has hit out at the LME’s decision to cancel trades last week.

Wilson, founder and chief executive of DRW, a Chicago trading firm, described the move as “one of the most inept moves an exchange has made that I can think of”.

LME said last week it had taken the decision to cancel trades “in the interests of the market as a whole”.