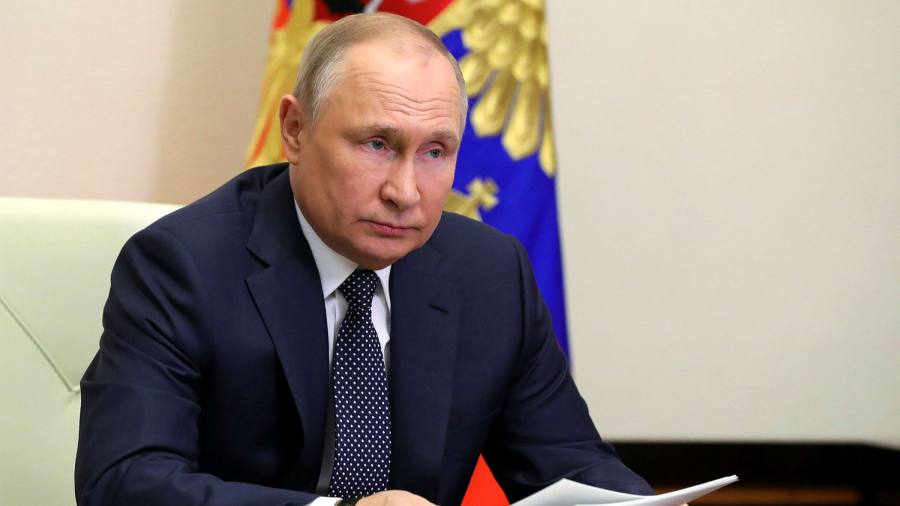 Russia will stop supplying gas to countries it considers “unfriendly” unless they pay in roubles, according to a presidential decree effective immediately.

Buyers in 48 countries, including the EU, will be required to open a bank account both in foreign currency and in roubles at Gazprombank in Russia, according to the decree published on Thursday. The targets are countries that have established sanctions against Russia’s economy, governing and business elite for its invasion of Ukraine.

Vladimir Putin on Thursday said Russia was establishing “a clear and transparent scheme” for these foreign customers.

“If such payments are not made, we will consider this a default on the part of the buyers — with all the ensuing consequences,” he added during a speech at the Kremlin.

The decision and the threat of supply disruptions, largely mooted by Russia’s president in the past week, have triggered alarm among European countries that rely heavily on Russian gas. Germany on Wednesday said it was preparing for energy rationing.

Putin gave the central bank, the customs authorities and the government 10 days to implement the new system. Because most April deliveries-related payments are not expected until early or mid-May, the decree will effectively be tested next month.

Olaf Scholz, Germany’s chancellor, said on Thursday he had told Putin that his country had checked its contracts with Russia for gas deliveries and would keep paying for them in euros and sometimes dollars.

Bruno Le Maire, France’s finance minister, speaking at a press conference with Robert Habeck, his German counterpart, said France and Germany were preparing for all scenarios, including Russia cutting off gas deliveries to Europe. Both also expressed opposition to paying for gas deliveries in roubles.

A French finance ministry official said that the decree did not seem to change much as the contracts would still be paid in euros to Gazprom, which would then switch the payment over to roubles. But “given the uncertainties, we are preparing contingency plans for gas supplies”, the official added.

“Russian dictator Vladimir Putin has decided to further escalate the economic war with Europe,” Jozef Síkela, Czech Republic industry minister, wrote on Twitter. “We cannot let ourselves be blackmailed, we cannot help him circumvent anti-Russian sanctions like this. On the contrary, we must demand compliance with valid contracts.” He added that the country had one month’s worth of gas and 90 days’ worth of oil reserves in storage.

“By making unilateral changes, Russia is jeopardising decades of energy relations with Germany and the EU, and accelerating the demise of this business model,” it added.

The reason for switching the payments to roubles was the weaponisation of the western financial system, Putin said.

“When companies from these countries refuse to fulfil contracts with Russian banks, enterprises, individuals, when assets in dollars and euros are frozen, it makes no sense to use the currencies of these countries,” he added.

“The transfer of payments for Russian gas supplies to Russian roubles is an important step towards strengthening our financial and economic sovereignty.”

Russia would strive to use its currency as payment for other exports, Putin added.

“We will continue to consistently and systematically move in this direction as part of a long-term plan, to increase the share of foreign trade settlements in the national currency and the currencies of those countries that are reliable partners.”