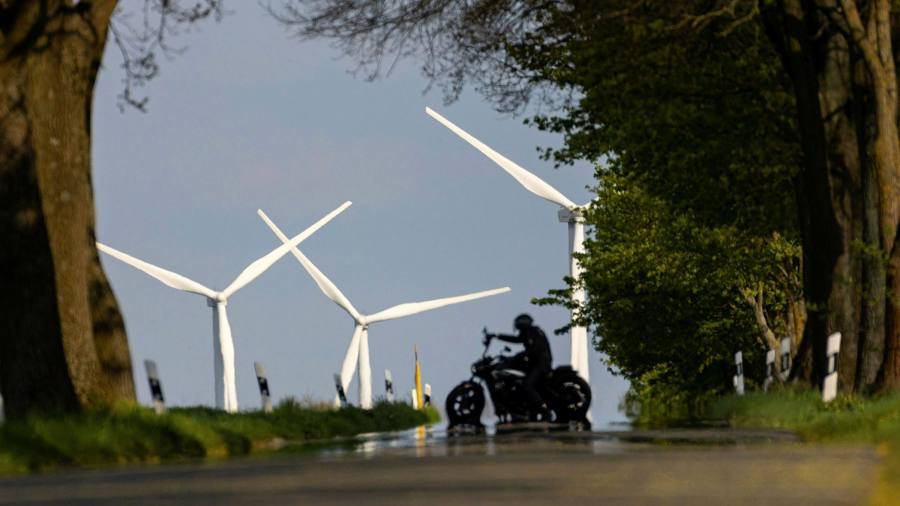 Welcome back to Energy Source. Today’s first note is on stranded assets — two words that should strike fear into anyone invested in industries that might not survive the shifts under way in global energy supply and demand. I also spoke to Gregor Semieniuk, an academic at the University of Massachusetts Amherst, who has published a peer-reviewed paper with some startling conclusions about who stands to lose most in the transition to cleaner energy.

Meanwhile, yesterday’s Memorial Day marks the unofficial start of summer in the US — and with it the country’s driving season. It’s true that Americans around me do indeed seem to be shrugging off record-high fuels costs. Highways in the New York tri-state area were certainly busy this weekend, I can report. (As well as that changing burst tyres on those highways is still not much fun.) Our second note, an extended Data Drill, is a chartbook on inflationary energy costs.

Thanks for reading. Derek

Rich investors have much to lose from an energy transition

Fossil fuel-exporting countries and their national oil companies stand to lose most from a global shift to cleaner energy, right? It’s a notion that underlies assumptions about how best to strip rogue petrostates — such as Putin’s Russia — of their income and power, as well as concern for economically vulnerable fossil fuel producers.

New peer-reviewed research, published last week in Nature, paints a picture with more nuance — and one that will alarm investors in rich consumer countries too.

If “plausible” climate policies are adopted, the paper’s authors say, the closure of oil and gasfields could bring losses of $1.4tn for the owners of these stranded assets. Who are these owners? Mostly private people in rich countries — investors with pensions or money in other funds.

“Most of the market risk falls on private investors, overwhelmingly in OECD countries, including substantial exposure through pension funds and financial markets,” write the authors.

“The (premature) obsolescence of capital stock is a recurring feature of dynamic, capitalist economies, as new products and industries replace old ‘sunset’ ones, and it is not typically associated with systemic financial risks because the financial sector is buoyed by the new ‘sunrise’ sectors. Yet, in the case of the low-carbon transition, the rate of industrial change required for achieving a 2ºC let alone 1.5ºC goal is so large that the rapid collapse of fossil-fuel ‘sunset’ industries presents major transition risks.”

And “wealth losses” will be more widely spread than the location of oil and gas wells suggest. All told, 56 per cent of fossil fuel asset owners are in the rich world, compared with less than 40 per cent of the assets themselves. “Therefore, private investors in rich countries have both a larger stake in continued fossil-fuel production and greater exposure to stranded assets,” than thought, the report says.

With so much on the line, rich-world asset managers or governments could try to slow down the energy transition or seek more upstream investment. That scenario has become more plausible in recent months as officials from Washington to London to New Delhi called on fossil fuel producers to increase supplies in an attempt to push down soaring oil and gas prices.

Not dealing with the risks quickly would be a mistake, argues Gregor Semieniuk, a professor at the University of Massachusetts Amherst, and the Nature paper’s lead author.

“Not thinking about quickly transitioning away from fossil fuels will lead to some nasty surprises 10 years down the road, when the physical risks from climate change become more palpable — and we could have an even more abrupt transition.”

He thinks greater co-ordination between policymakers and asset managers is needed to persuade operators to scale back capital expenditures.

“The sooner we get that, the less steep, the less disruptive this will all be,” he told Energy Source. “We can’t just leave it to individual investors to do the right thing. (Derek Brower)

Unless you’ve been living under a rock you’ve probably heard inflation is running rife right now.

In the US it is at a 40-year high and showing no sign of letting up. In the eurozone, consumer price growth is at its highest since the currency was created. German inflation hit an all-time high of 8.7 per cent yesterday. Even Google searches for the term “inflation” are four times their level this time last year.

For today’s ES we’ve mapped out some of the natural resource price spikes feeding into this broader inflationary dynamic.

Most obvious for consumers: at the pump. In the US, petrol prices surged past $4.60 a gallon this weekend and are expected to keep rising (there’s talk of $6+ before the summer is out). In Europe they are even higher.

As I wrote on Sunday, that has started forcing drivers to reconsider their car usage as their monthly expenses rocket.

Even more significant is the expense of diesel, which is even pricier — cutting into the bottom lines of operators in sectors such as agriculture, transport and industry.

Natural gas prices have been in the headlines since Russia’s invasion of Ukraine sent them hurtling upward.

Europe’s TTF marker has been the most volatile. But Henry Hub, the US benchmark, has also risen sharply.

Steel and copper — the most ubiquitous of metals — have also surged as post-pandemic demand outstrips sluggish supply.

And demand for lithium, once an obscure metal with little usage outside lubricants and greases, has rocketed as the electric vehicle market explodes. Supply is scrambling to keep up.