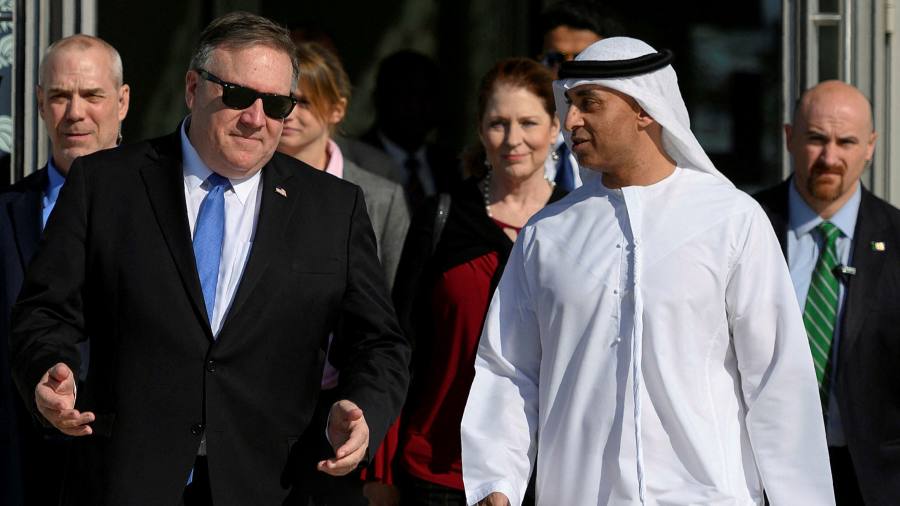 The United Arab Emirates has reaffirmed its commitment to the Opec+ production agreement, in what appeared to be an about-turn hours after its US ambassador said the Gulf state favoured higher output.

In comments seemed designed to reassure fellow Opec members, Suhail Al Mazrouei, the UAE’s energy minister, said on Thursday that his country believed “in the value Opec+ brings to the oil market”.

“The UAE is committed to the Opec+ agreement and its existing monthly production adjustment mechanism,” he said on Twitter.

Brent crude prices, the international oil benchmark, rose more than 4 per cent on Thursday morning to $117.58 a barrel. They had dropped on Wednesday after Yousef Al Otaiba, the UAE’s powerful ambassador in Washington, said Abu Dhabi favoured “production increases and will be encouraging Opec to consider higher production levels”.

The apparently conflicting messages from the UAE suggested that Abu Dhabi wanted to send a message to the Biden administration that it was willing to help an ally after a period of tense relations, but also that, as a member of Opec+, it had little space to do anything unilaterally.

“The position of the UAE is clear — the underlying policy is that we stick with Opec+. However, Otaiba has to do his job to keep the Americans happy,” said Abdulkhaleq Abdulla, an Emirati political science professor.

The Gulf’s oil producers have been under pressure from the Biden administration to pump more crude to help bring down oil prices, which have hit their highest levels in more than a decade in the weeks since Russian president Vladimir Putin ordered his troops into Ukraine.

But Opec+, which includes Russia, has resisted US pressure. Otaiba was the first senior official from an Opec member to call on the alliance to boost its production.

Analysts say Gulf producers believe that oil prices are being driven by geopolitical events rather than supply and that there is limited capacity to boost output.

The Opec+ alliance has declined to go beyond a plan agreed last year to increase production each month by 400,000 barrels a day, and some members, including Nigeria, Angola and Malaysia, have consistently failed to meet their production quotas since that deal was reached.

By January the group’s total production was 900,000 b/d below its target, according to the International Energy Agency.

Opec spare capacity — often defined as additional production that can be brought online in 30 days and sustained for 90 days — was roughly 3.2 mn b/d in January, according to JPMorgan.

That is below both the 5mn b/d global spare capacity buffer normally required to prevent oil market volatility and the amount that would be needed to replace Russian oil in the event of a global embargo. The only producers with significant spare capacity are Saudi Arabia, and to a lesser extent, the UAE.

Gulf states have been careful to tread a neutral line on Russia’s invasion of Ukraine and also want to avoid being drawn into US politics by rising petrol prices ahead of midterm election politics later this year.

The UAE angered its western partners when it abstained on a UN Security Council vote condemning Russia, in what was an expression of Abu Dhabi’s frustration with the Biden administration.

Officials say the UAE has been infuriated by what it perceives as an insufficient US response to its security needs in the wake of missile and drone attacks by Iranian-aligned Yemeni rebels targeting Abu Dhabi in January. US officials believe its response to the Houthi threat was adequate.

The UAE did vote alongside the US in a non-binding UN General Assembly vote critical of Moscow’s invasion, and Otaiba’s statement appeared to be a further effort to ease tensions with Washington.

“There is plenty of stress in the UAE-US relationship — indeed we never had it as bad as these days — but the blame is on Washington and Biden,” said Abdulla. “The real issue is the lack of American commitment to the UAE and Saudi Arabia and the fact that DC is not as responsive as it used to be.”

The Opec secretariat was not informed ahead of Otaiba ’s statement, a person familiar with the matter said. It was not clear if the UAE engaged with Saudi Arabia, Opec’s de facto leader and the UAE’s closest Gulf ally, ahead of the diplomat’s statement, which was welcomed by Blinken.

Saudi Arabia did not immediately respond to a request for comment. The UAE became embroiled in a dispute with Saudi Arabia last year after Abu Dhabi wanted to increase its production quota, and Otaiba’s comments risked annoying Riyadh.