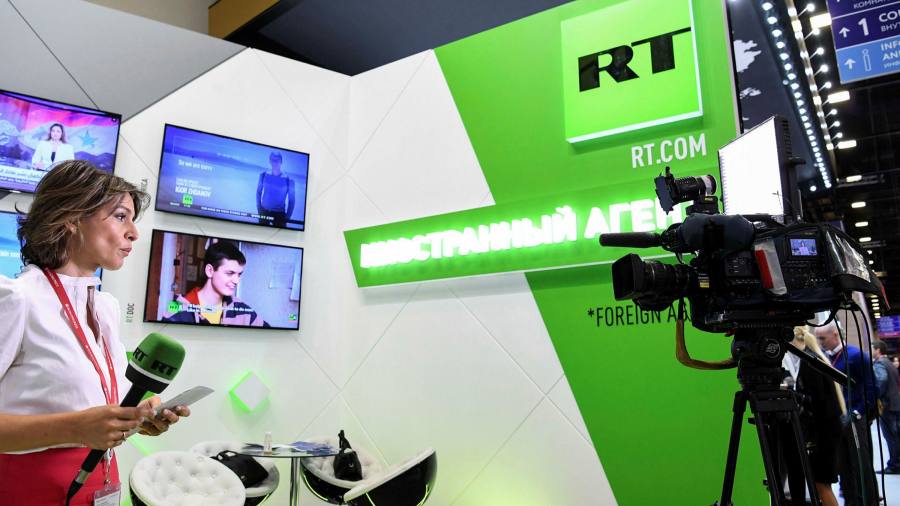 Russia Today has been stripped of its licence to broadcast in the UK after an investigation by the media regulator concluded that the Russian state-backed television network was not a “responsible broadcaster”.

Ofcom said on Friday that it no longer considered RT’s licence holder, ANO TV Novosti, to be “fit and proper” after it had launched 29 investigations into impartiality breaches regarding the broadcaster’s news and current affairs coverage of Russia’s invasion of Ukraine.

“We consider the volume and potentially serious nature of the issues raised within such a short period to be of great concern — especially given RT’s compliance history, which has seen the channel fined £200,000 for previous due impartiality breaches,” the watchdog said.

Ofcom’s move is the latest in an escalating information war between Russia and western allies of Ukraine. Moscow has restricted access to several foreign news sites and passed legislation that bans “fake news” and forbids insulting official institutions online.

The push to ban RT gathered pace last month when Nadine Dorries, the UK culture secretary, asked Ofcom to look at the operation of the network in Britain over concerns that it could “look to spread harmful disinformation” about the war in Ukraine.

Ofcom on Friday said its investigation had also taken into account “RT’s relationship with the Russian Federation” and recognised that “RT is funded by the Russian state, which has recently invaded a neighbouring sovereign country”.

RT was pulled off air in the UK earlier this month because of sanctions. YouTube and Meta, the owner of Facebook, have also blocked the network from broadcasting to Europeans on its platforms, cutting one of its main routes of access to the western public.

There have been concerns that banning RT in the UK could be self-defeating because it could lead to retaliatory measures against the BBC in Russia.

Lord Peter Ricketts, former chair of the Joint Intelligence Committee, said Ofcom’s decision was right given Russia had been trying to block and interfere with coverage by the UK’s public service broadcaster BBC.

BBC World News was blocked in Russia earlier this month, as were the broadcaster’s news sites in English and Russian, but digital restrictions can often be circumvented using a VPN, or virtual private network, that masks internet browsing.

RT’s website can still be accessed in the UK, as Ofcom’s mandate only extends to traditional broadcasts over television and radio.

Anna Belinka, RT’s deputy editor-in-chief, said Ofcom was “ignoring RT’s completely clean record of four consecutive years”, dismissing the fine it was handed in 2019 after the regulator found it had aired partial reporting on the Salisbury poisonings, the war in Syria and the Ukrainian government’s treatment of Roma people.

“Ofcom has falsely judged RT to not be ‘fit and proper’ and in doing so robbed the UK public of access to information,” Belinka said, arguing that Ofcom was “stating purely political reasons tied directly to the situation in Ukraine and yet completely unassociated to RT’s operations, structure, management or editorial output”.

James Heappey, UK defence minister, told the BBC the decision was “welcome”, adding that it was right that the decision had been taken by the regulator, not the government.

Damian Collins, chair of the Commons’ digital, culture, media and sport committee, called Ofcom’s decision “right” as “RT are under the control of the Russian state and prevented under Russian law from reporting the truth about Putin’s brutal and unprovoked war against Ukraine”.