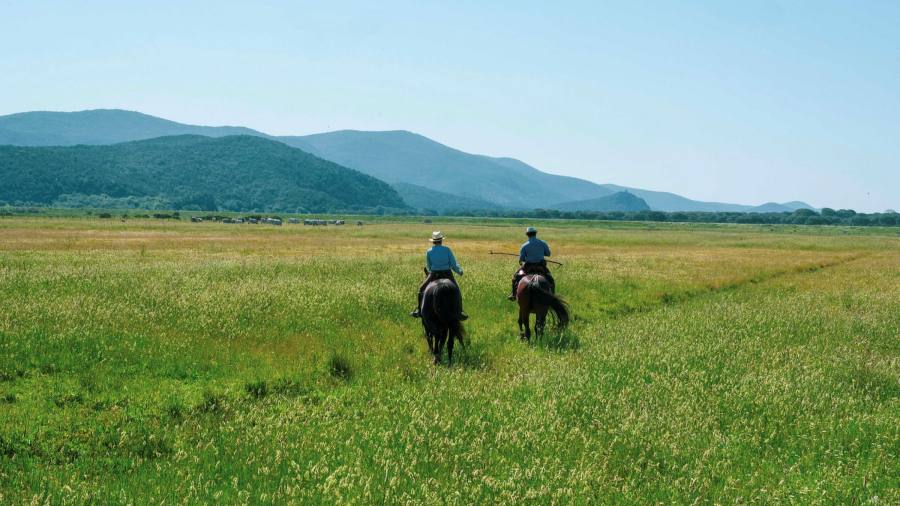 In Italo Calvino’s 1957 novel, The Baron in the Trees, the book’s main protagonist, a nobleman’s son called Cosimo, climbs into a tree in the family’s Italian garden. He clambers through the branches into the forest beyond, to live out his adventures in the canopy, running from the oaks to the olives to the beech trees in a childlike wonderland. It is both a fairytale and parable, and an elegy to arboreal paradise before we cut it down. “I don’t know if it’s true that, as you read in books, in olden days a monkey that left Rome jumping from tree to tree could reach Spain without touching the ground,” observes the book’s narrator.

I first read The Baron in the Trees a few years ago, and it affected me deeply at a time when environmental anxiety was dominating the news. This trip I’m making to Italy, for better or for worse, feels like a brief escape from that climatic malaise.

The Maremma reaches along the western coast of central Italy, taking in part of Lazio and part of southern Tuscany. It is known for its protected natural park, reclaimed marshes, and low-lying hills or poggi. North of the town of Grosseto, the forest drapes down over these hills to flank the 16th-century country estate of La Pescaia where I’m staying. As I meander through the woods astride a strong black Maremmano horse, Calvino’s fictional landscape returns with a curious realness, as if it were only yesterday that I was held in his storyteller’s grip.

The foliage is still young and pollen hovers in the air. A bright pulse of sunshine dances between the leaves. The branches of the holm oaks evoke the antlers of deer. The animals — which are hunted from November to January — pick their way through the undergrowth, keeping out of sight, as do the wild boar.

For the past five hours, since we set off from La Pescaia’s stableyard, we’ve heard no cars and seen nobody. Our destination is a former hermitage in a forest clearing, the Convento di San Benedetto alla Nave, where, among the crumbling walls, there are sprays of rosemary from what was the kitchen garden. We duck under the crowns of the unpruned fruit trees that have outgrown their orchard and pluck at figs fattening against broken stairs. The horses slake their thirst on spring water. I rest in the shade among the birds.

This is what I’ve come for — a short break from the burdens of a darkening world, for nostalgia and nature, absorbed at the pace of a horse’s stride. I am here with my sister. When we’re riding, we can move in and out of conversation, without intensity. No one can reach us, which takes me back to my childhood in Scotland. When we were young, we would disappear into the woods, never quite keeping to the route we’d promised our mother. It is that sense of freedom and trespass I’m glad to return to, in the heart of Italian horse country where the traditional Maremma butteri (cowboys) are just about hanging on to the old way of life.

Our base, La Pescaia Resort, is a small 18-room hotel between the forest and the plain, which I was tipped off about by an Italian friend who knows I like horseriding. This is one of the activities on offer at La Pescaia, which is also a working farm extending to 150 hectares, with interconnected paths you can walk for hours, up towards the hill villages.

It is a labour of love from two Milanese sisters in their middle thirties, Margherita Ramella (a keen rider) and Beatrice Ramella (an organic flower grower and designer, formerly with Tom Ford). They manage and run the operation with their husbands, Mariano Fiorda and Gonzalo Müller. The families live simply in wooden cabins in the olive grove behind the hotel, which occupies the former ancestral home of the Ramellas’ stepfamily, the Tolomei.

About half an hour’s drive from the sea, it sits in a region once considered the realm of brigands and outlaws — others were kept away by the malaria that festered in the marshy land, says Margherita. After the first world war, returning soldiers were also given property; it’s why local farmsteads are named after some of the key battles, says Donatella Ciofani, a conservationist who works with farmers to preserve the region’s unique biodiversity. Poor Sardinians later moved in to other pockets in the region, bringing with them a shepherding tradition, says Margherita’s husband, Mariano, over a plate of fresh ricotta.

When I visit one of the last saddlers in Grosseto, I notice the lyrics of a traditional song pinned to the wall. “Everyone says: Maremma, Maremma/But it seems to me a very bitter Maremma/The bird that goes there loses its feathers.” This is the trope, that the region somehow represents the end of “civilisation”.

“Siena mi fé, disfecemi Maremma — ‘Siena made me, Maremma unmade me’” — wrote Dante Alighieri in The Divine Comedy. He was describing a Tuscan noblewoman murdered at her husband’s castle in a part of the world where, for centuries, violence and disease prevailed.

Maremma’s fortunes have been tied to the draining of its marshes — a canal system was established in the 1800s, says Ciofani, which in the 1930s was cleared and extended by Mussolini. The waterways stitch the tapestry of fields, which are a viridian green pricked with blood-red poppies. The lines occasionally intersect with avenues of cypress trees indicating a house here, an abandoned farm there, with gates falling off their hinges.

There are disappearing ellipses of umbrella pines with bobbleheads and copper trunks, and a single-track railway that groans under the weight of a simple train — the one I see has just a couple of carriages, and painted a Virgin Mary blue — which chugs to and from Siena. I am visiting in May; the grasses haven’t yet crisped under the summer sun but they will, when Maremma shimmers in the heat like a spill of runny honey.

Even now, it’s hot enough for the horses to build up a sweat. The lower slopes of the hills are flecked with silver olive trees where pale grey Maremmana cattle linger in search of shade. La Pescaia’s mixed herd includes these rare breed cows, elegant and hardy with lyre-shaped horns, as well as the horses we ride — crossbred thoroughbreds, Arabs and the special Maremmana breed historically popular with the Italian cavalry. The local saddle style — the scafarda — is designed to be as comfortable as an armchair, with a figwood frame and a stuffed leather hammock. The artistry in the saddles’ making, however, is becoming scarcer.

“I’m something in between a panda and a Mediterranean monk seal: almost extinct,” says Moreno Menconi, owner La Rapida, a saddler in Grosseto, who bemoans Maremma’s disappearing horse culture. Men are donkeys to turn their back on the region’s equine history, he says.

It is a sentiment that could just as easily be spoken by Calvino’s protagonist, Cosimo. In the course of the book, Cosimo’s childhood optimism is replaced by exasperation for men’s misplaced faith in the Age of Enlightenment. Cosimo’s life among the trees suggests that living in closer synchrony with nature might offer a more fulfilling existence.

That sentiment — however simplistic it might seem — is perhaps why I like Maremma and La Pescaia so much. The estate feels as if its owners have their hearts in the flowers and their hands in the ground. It is driven by a love of heritage and place, not luxury-by-numbers, as shown in the chalky, cloudlike colours of my room, the lemon-curd tiles of my bathroom, and the weave of jasmine wrapping the stairs, which makes the bees drunk on nectar.

Everything is subtle, true and local: the cuts of beef cooked on the kitchen’s open fire; the laundry room and scullery with their doors flung open to reveal marble sinks and pools of light that feel like a glimpse into a Vermeer; the abundant vases stuffed with dahlias, burnt orange ranunculus, and sky-blue love-in-a-mist grown in Beatrice’s garden.

There is no hotel signage, no lobby, no televisions and air-conditioning in only eight of the rooms. There is a large pool and a sunny loggia where you can suck on fat olives and sip on a delicious local sparkling rosé. This is also where breakfast is served: a house sourdough, simple yoghurt, fresh juice, fruits, homemade granola and farmhouse eggs with saffron-orange yolks. Frothy-knickered chickens amble about the lawn.

There are two-bedroom apartments in an annex once used by tenant farmers, and cool, high-ceilinged rooms in the main Villa Tolomei. The Ramellas keep the personality of the place aligned to its rural setting and, in these times of exceptional price rises, this is one of those fair, rare experiences where the room rates (high, but not close to what they could be) don’t puncture the dream.

In other words, you don’t have to be an equestrian to stay at La Pescaia and enjoy it. But for me, the riding is the reason why I’d be as quick to return here as Calvino’s hero is to take off into the trees. The house has half as many stables as it has rooms, and the pawing of the horses in the courtyard below the terrace restaurant feels like a beckoning into the forest beyond.

On another day, we start soon after dawn and join some local butteri employed by the regional government. We ride out to check on the rare-breed cattle farmed in a protected area between the forest and the coast. By the time we have watched the professional horsemen artfully separate a sickly calf from the herd, it is almost noon.

We meander along the seashore where the deer come to swim. My legs are sore. The sun is intense. We return to the butteri’s working corral across the fenceless meadowlands, throwing up clouds of cracking insects into the air in a scene that feels as ancient as it is present, as magical as it is real. It is as if something has fallen back into place — a feeling connected to my childhood, thinking and moving at a horse’s stride. I have entered a world that smells of leather, pine, sea air and fescue grasses — a slow journey with my sister, measured by the light and crunch of seed husks under hoof.

Sophy Roberts was a guest of La Pescaia Resort (pescaiaresort.com). Double rooms cost from €250 per night, bed and breakfast. Half-day rides cost from €150 per person