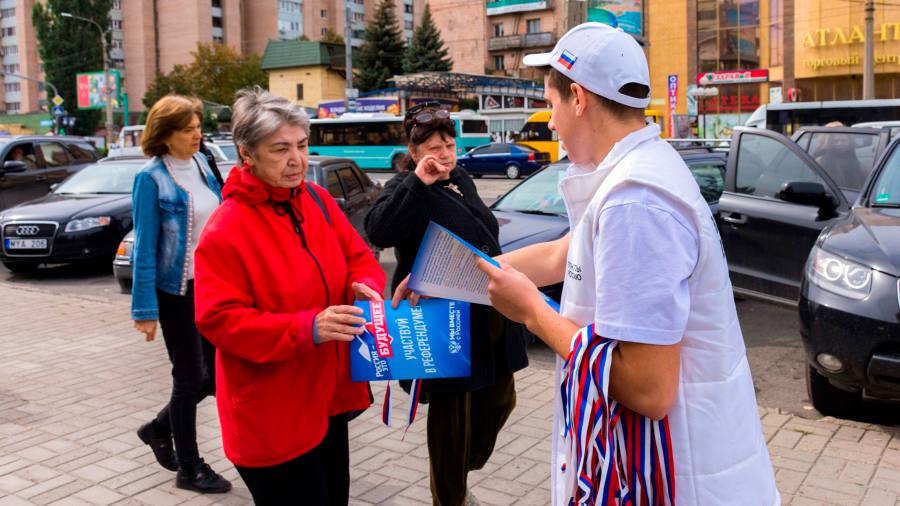 Voting began on Friday in four provinces in southern and eastern Ukraine in hastily convened referendums on whether to join Russia, to the delight of pro-Moscow officials and the disgust of those residents whose allegiance still lies with Ukraine.

For the Russian-installed officials marshalling the vote, the event is a milestone in the Kremlin’s full-scale invasion of the country launched seven months ago — even though none of Donetsk, Luhansk, Zaporizhzhia and Kherson regions are under their full control.

“This is a historic event where we can express our free will and make a choice that will benefit not just us but also our children and grandchildren, choosing a happy and bright future, which absolutely must tie us to the Russian Federation,” said Alexander Saulenko, the Russia-appointed head of the port city of Berdyansk in the Zaporizhzhia region, after the vote was announced.

But for many living under Russian occupation and repression the vote is about as far as possible from an expression of free will.

“Bullshit. Everyone knows it. Everyone understands it. The result is predicted,” said a logistics entrepreneur who fled Berdyansk this month. “I have no information on how the referendum will be conducted and I don’t think even the local [occupation] administration does,” said a man from the southern city of Kherson. “This instruction has come from Moscow. It will be a propaganda show.”

Like other residents of occupied regions contacted for this article, they declined to give their name for fear of possible reprisals against them or their families.

The referendums are seen by Ukraine and its western allies as a fig leaf that allows Russia to, in effect, annex large parts of southern and eastern Ukraine and to present it as a triumph despite its stuttering invasion of the country. Moscow also hopes the move will put an end to its battlefield reversals by deterring Ukraine from counter-offensives and the west from providing Kyiv with modern weaponry.

“Russia can’t give up people close to her to be torn apart by executioners and fail to respond to their desire to determine their own fate,” President Vladimir Putin said on Wednesday after the referendums were announced and a partial mobilisation was ordered to shore up his invasion forces.

Ukraine has vowed to continue its fight to retake the territories in the face of Russian threats to retaliate — possibly with tactical nuclear weapons.

With the vote under Russia’s complete control, the result is a foregone conclusion. “Next week four regions will join Russia,” Olga Skabeyeva, host of a current affairs programme on state-owned TV, said on Wednesday.

Sergei Kirienko, the Kremlin’s domestic policy chief, has made several trips to the occupied areas in recent months to set up the referendums. In late August — when the ballots were not expected to be held for several months — Kirienko made it clear they would deliver the desired result.

“Russia will respect any decision they make, but since I often have to be in the Donbas, Kherson and Zaporizhzhia, I know how people feel, see polling results and understand that the decision at the referendum will leave no room for doubt,” Kirienko said.

Occupation authorities are now pulling out the stops to ensure a good turnout over five days of voting. But the impromptu methods fall well short of normal democratic standards.

In the Donbas regions of Donetsk and Luhansk, where Russia first fomented an armed conflict in 2014, ballot boxes will be brought to housing blocs and courtyards for the first four days and open in polling stations only on the last. In Kherson, there will be a mixture of online and in-person voting, although residents who spoke to the Financial Times had no information on how to take part, even if they wanted to.

“Even if I don’t vote it will be counted. It will change nothing,” said a retired businessman in Donetsk.

Evgeny Balitsky, the Russia-appointed head of Zaporizhzhia province, said police would be going from house to house to “invite” people to vote.

“Many people will be visited by our team of people, which will consist of members of the commission accompanied by police officers so that there are no incidents, and people will be invited to vote by address,” he added. “In this way, we protect residents from gathering in places where the Nazis [Ukrainian forces] can launch rocket attacks or plant explosive devices.”

There were explosions in Donetsk and Melitopol on Thursday, which occupation authorities blamed on Ukraine but which Ukrainian officials said were provocations by Russian forces to sow fear and cast Kyiv as the aggressor.

Several residents expressed concern that the referendums — with authorities scouring neighbourhoods for voters — and subsequent notional incorporation into Russia could lead to more local men being forced to fight alongside the Russian army.

“The consequences are hard to imagine, but everyone is worried about possible forced mobilisation, which is in itself criminal,” said a teacher in her fifties from Kherson. “But we hope for liberation before any irreversible consequences occur, of course, with greater activation and acceleration of military aid from the west.”

Ukrainian officials have told residents not to take part in the ballot or to help organise it.

Many residents in the four regions fled either to elsewhere in Ukraine or to Russia to escape the fighting, depleting the population. Though an accurate picture of public opinion is difficult to gauge, the sympathies of many of those who remain lie with Moscow.

An engineer living in Kyiv described how he had been trying to dissuade his parents in Luhansk city from taking Russian passports or taking part in the referendum, which could lead to punishment “once Ukraine took the territory back”.

“My father thinks Russia is good and I don’t understand him,” he added. “It is so sad. Now I don’t think I have parents any more.”