Big talk from Truss, but Britain’s reputation is wobbling 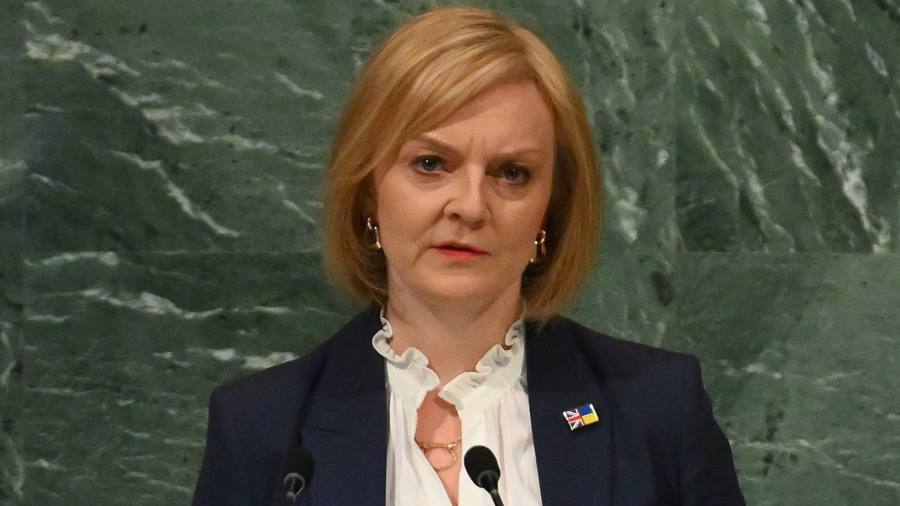 This article is an on-site version of our Britain after Brexit newsletter. Sign up here to get the newsletter sent straight to your inbox every week

Liz Truss continues to dash pell-mell into her premiership at both home and abroad, flying to the UN General Assembly in New York to set out her stall to the world, while her lieutenants fired off daily salvos of policy announcements in London.

The promises were delivered with the glassy-eyed conviction in which Truss specialises, but it’s difficult to ignore that the warning lights are starting to flash. Sterling is back in the 2016 doldrums and the Institute for Fiscal Studies has warned that Truss’s planned tax-cuts risk making the public finances unsustainable.

As she unveils a supply-side bonanza at home, including tax cuts, low-regulation investment zones and a ‘big bang 2.0’ in the City, global sentiment on the UK remains bearish.

Convincing investors that the medicine she is applying — fiscal stimulus and deregulation — is the right palliative for an economy beset by low productivity and skills shortages, is the new prime minister’s challenge.

In her speech to the UN overnight Truss told her fellow world leaders of Britain: “We will be a dynamic, reliable and trustworthy partner” but over the next six months, she is going to have to back that up if the UK’s wobbling reputation is to be stabilised.

Which brings us back to Brexit, an event that has brought six years of roiling political and economic instability that has deterred growth and investment. UK companies’ share prices have taken a hammering, leaving them vulnerable to takeovers thanks to the so-called “Brexit discount”.

From the outside, many UK policies look hobbyhorsical and not supported by industry. Backbenchers are promised, for example, that plans to revise or rescind all the EU-derived law on the UK statute book by the end of 2023 will bring a “productivity boom”, but to international investors that rely on regulatory stability, it just looks like more work.

The danger to the UK is that this has been going on for too long. A senior British diplomat at the Foreign Commonwealth & Development Office — a hopelessly demoralised institution at the moment — told me this week that international contacts openly question whether Britain’s six-year Brexit funk is really a passing phase.

“There is an allowance given for the upheaval caused by the vote, and an acknowledgment that UK institutions are resilient and professional — as there was for the US with Trump — but you hear more and more questions about whether the UK will ever snap back,” they said.

Given the scale of these challenges, it might seem besides the point to return to the old subject of the implementation of the Northern Ireland protocol, but this week in New York it was very hard for the new PM to avoid.

Like it or not, when Truss promises to be a “reliable and trustworthy” partner to the world, the UK’s willingness to make good on the deal it signed for post-Brexit trading arrangements in Northern Ireland is being set as a benchmark in Washington and Brussels.

Officials say that in her bilateral meetings with EU commission president Ursula von der Leyen and US President Joe Biden the message was delivered loud and clear: unilateral action via the Northern Ireland Bill is not a good option; seek a negotiated solution.

EU officials add that Truss will have had the message reinforced from EU capitals, including Paris and Berlin: think carefully about a course of action that will reflect very badly on the UK’s standing in the world.

Truss tried to pre-empt US arm-twisting by admitting on the plane over to New York that there was no realistic prospect of a US-UK trade deal any time soon, a move calculated to remove that piece of leverage from Washington’s diplomatic armoury.

But the admission also highlighted the failure of Brexit to deliver the promised boom in UK exports and trade deals and the continued cost of failing to do a high-alignment deal with the EU on agricultural and biosecurity standards, the so-called SPS rules.

Brexiters have always refused to do such a deal because they feared it would rule out a trade deal with the US (which see EU agri standards as protectionist) but given that that isn’t happening any time soon, by their own admission, why not do it now?

They won’t, of course, and such a deal isn’t absolutely essential to fixing the NI protocol issue, though it would obviously help, but it points to the dogmatic corners into which Brexit has backed successive British governments.

Ultimately the solution to the Protocol stand-off lies in reducing the burden of business processes to the point that all sides can live with it, recalling that polls are very clear there is no majority support in Northern Ireland for unilateral action to rip up the deal.

Any eventual compromise will require the European Commission to get realistic about the actual risks posed to the EU single market by goods arriving from Great Britain; but equally for Truss to drop the ideological elements of the Northern Ireland Bill that essentially unravel the deal that was agreed.

As noted last week, the domestic political forces that she used to carry her into office are ranged against her, but as market pressures on sterling indicate, the UK is not an island when it comes to the global economy.

Washington is unashamedly dangling carrots, holding out the prospect of a Biden state visit next March to coincide with the 25th anniversary of the Belfast Good Friday Agreement — the new putative deadline for a deal.

Truss was therefore implicitly invited this week to imagine two contrasting worlds. One, where she does a deal over Northern Ireland, gets a pat on the back from the US president and resets relations with Europe, partly via engaging with Emmanuel Macron’s new group to pull in Europe’s political fringes.

Or another, where the UK is at loggerheads with both Brussels and Washington after picking a fight that, for all her attempts to revive the buccaneering version of Brexit, makes the UK look both insular and unreliable.

The history of Brexit gives very little reason for optimism, if we’re honest, but Truss has also shown she is a politician that can turn on a dime when it suits her. This week in New York she was at least given pause for thought.

Back home Team Truss has been all about the “dynamism” message ahead of tomorrow’s “mini-Budget” which promises to have some pretty maxi fiscal promises contained within it.

Among the plans are for up to 40 “investment zones” which will be sprinkled across the country, offering lighter-touch planning rules, laxer environmental impact assessments and easier access to a raft of local development funds.

The IZs would seem to have echoes of the US’s “Opportunity Zones” which were part of Donald Trump’s fiscal stimulus plans and have decidedly mixed reviews when it comes to whether the benefits they deliver reach beyond developers and other vested interests.

The zones are designed to attract investment and appear (details are still being worked out, including the scale of tax breaks) to be an attempt to broaden and simplify the Levelling Up funding of the Johnson era.

In those schemes it was very clear that winning projects had to be deliverable by the election and were often quite micro in nature — local sugar-shots of money designed to improve a sense of place in any given area.

These zones go wider than that — “freeports on steroids” as one government official put it — but that always begs the question as to why, if this is so good for investment, these breaks don’t apply everywhere.

Because as Martin Wolf pointed out with painful clarity this week, the UK is already a relatively low-regulation, low-tax economy but has still seen business investment flatline since Brexit (see chart).

The deeper challenge is with long-run productivity which requires planning reform, investment in skills and a stable regulatory environment which gives investors confidence to make long-term bets on the UK economy.

The risk is that these zones conspicuously fail to tick many of those boxes.

Whitehall insiders say that the planning element was dropped to avoid a backlash from Tory backbenchers, leaving it in the hands of district councils and mayors and greenbelt protections in place.

It is not at all clear that there will be the kind of political muscle on planning — like Mayoral Development Corporations that have been the hallmark of previous successful strategic redevelopment plans — that will actually make a strategic difference.

The risk, as Giles Wilkes, the former economic adviser to Theresa May observes, is that these zones look like yet another spasm of post-Brexit politics, rather than the kind of long-term development plans that investors like.

Ultimately, says Wilkes, investors want to know that institutions and decisions will outlive political cycles — something that Brexit, which has resulted in four UK prime ministers in six years, has made increasingly difficult.

In the drive to reduce taxes, cut regulation and pare back what Conservatives like to describe as “nanny-state” policies, Liz Truss is developing a clean argument and one with historical appeal to Tory voters, writes Robert Shrimsley. Trussonomics, he argues, might just work.

What is behind the cost of business crisis hitting UK plc? Economics Editor Chris Giles alongside our head of editorial statistics and data visualisation guru Alan Smith explain.

If the opinion polls are correct Italy on Sunday will elect its first far-right government since fascist dictator Benito Mussolini. The FT’s Rome correspondent Amy Kazmin explores what this means for the EU, transatlantic relations and the war in Ukraine. Plus, register for a virtual briefing with FT journalists on Monday on the election results.