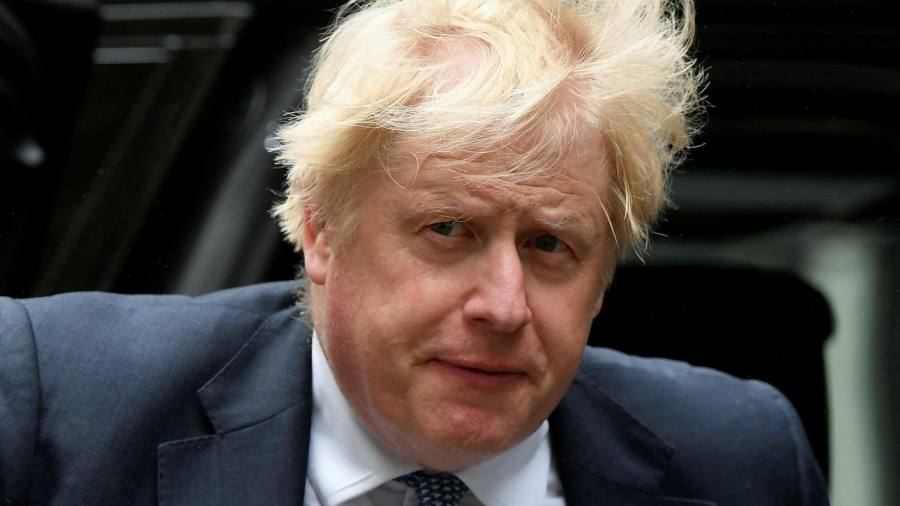 Boris Johnson suffered a fresh setback on Tuesday when his independent standards adviser said there was a “legitimate question” as to whether his fine in the partygate scandal constituted a breach of the ministerial code.

The prime minister was fined by the Metropolitan Police for attending a birthday party during coronavirus restrictions in June 2020, and Lord Christopher Geidt indicated in his latest annual report that he had asked Johnson’s team to explain if his actions were in compliance with the code.

It came as Johnson’s allies said on Tuesday that he could defeat a vote of no confidence in his leadership but expressed fears that it would leave the Conservative party badly divided in the run-up to the next election.

Geidt said in his annual report: “In the case of the fixed-penalty notice recently issued to and paid by the prime minister, a legitimate question has arisen as to whether those facts alone might have constituted a breach of the overarching duty within the ministerial code of complying with the law.”

Johnson responded in a letter to Geidt that he believed he did not breach the code by receiving the fine in relation to the birthday party in the Downing Street cabinet room in June 2020.

“I have taken full responsibility for everything that took place on my watch, and reiterate my apology to the House [of Commons] and to the whole country in respect of the gathering on June 19 in the cabinet room for which I received a fixed-penalty notice,” said the prime minister.

A total of 30 Tory MPs have publicly called for Johnson to quit or face a vote of no confidence, with some making their demands following publication last week of senior civil servant Sue Gray’s damning report into Downing Street parties held during coronavirus restrictions.

For a vote of no confidence in Johnson to take place, 54 Conservative MPs must submit letters requesting a ballot to Sir Graham Brady, chair of the 1922 committee of backbench Tories. A total of 180 Conservative MPs would then have to vote against Johnson for him to be removed as party leader and prime minister.

Senior Tories close to Johnson expressed concern that momentum was building among rebel MPs to hit the 54-letter threshold and that a vote could happen as soon as next week, when parliament returns after its latest recess.

One close ally of Johnson said: “It is starting to feel inevitable that [the rebels] may get the vote [of no confidence].”

He predicted that Johnson would win, but added: “Then a hardcore group of MPs will have nothing to lose by playing guerrilla warfare.”

Another senior Tory official voiced concern that a victory by Johnson in a no-confidence vote may not be decisive enough, and unleash damaging divisions within the parliamentary party in the run-up to the next election.

“The worst-case scenario is that Boris wins 60/40, he is safe as leader for the next year and we’re irrevocably split going into the next election,” said the official.

Another ally of Johnson said predictions of a no-confidence vote were overblown, adding that he was not “not aware of any credible alternative [leader]”. Downing Street declined to comment.

One MP critical of Johnson highlighted the no-confidence vote held against Theresa May in late 2018, when the then prime minister won after securing the support of 63 per cent of the parliamentary party.

“She was out within the year because it was clear too many people were opposed to her,” he added.

John Stevenson, MP for Carlisle, became the latest Conservative to submit a letter of no confidence in Johnson, saying that “the continuing criticism, revelations and questions are debilitating for the government”.

Former Tory cabinet minister Andrea Leadsom said the Gray report had revealed “unacceptable failures of leadership that cannot be tolerated and are the responsibility of the prime minister”.

Although she did not call on Johnson to resign, Leadsom said: “Each of my Conservative MP colleagues and I must now decide individually on what is the right course of action that will restore confidence in our government.”

Lord William Hague, former foreign secretary, said Johnson was in “real trouble” and a no-confidence vote could be imminent.

Police officers are investigating claims that a curry eaten by the pair and Labour colleagues may have breached Covid restrictions in April 2021.

Labour has said the meal was legal because it was “reasonably necessary” for work purposes.