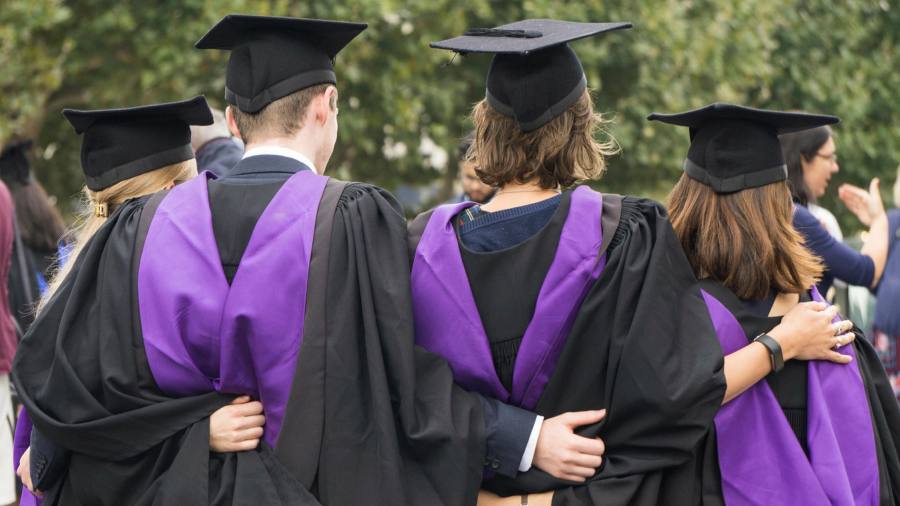 Rishi Sunak, chancellor of the exchequer, on Wednesday claimed to give a boost to taxpayers hit by the cost-of-living crisis, by raising the National Insurance threshold, cutting 5p off fuel duty, and pledging to cut the basic rate of income tax from 20p to 19p in 2024.

But analysis by the Office for Budget Responsibility showed that the increased spending will in large part be funded by student loan reforms announced last month.

Under the reforms, the salary threshold at which students start paying back their loans will be cut from £27,295 to £25,000 for students enrolling from September 2023. The cut-off point at which unpaid loans are written off will be extended from 30 to 40 years.

The changes will save the government an average of nearly £6bn annually, the OBR said, the same amount needed to fund a 1p cut in the basic rate of income tax.

The Intergenerational Foundation, a charity, said the government was turning young people into “cash cows” by “tightening the screw on graduates”.

“The government is cynically taking from the young tomorrow to pay for giveaways today, making them less able to save for their own old ages while expecting them to pay too much towards the bills of older people today,” it said.

Although graduates will pay less interest on their student loans under the changes, the changes will benefit only the highest earners who will pay back less than they do currently. Most graduates will see their repayments increase, with mid-to-low earners repaying about £11,600 more of their debt across their lifetime.

The reforms will reduce the proportion of student loans that are not repaid from more than half to just over a third, according to the OBR.

The Treasury will receive additional income from the changes over a number of decades, as students gradually pay back more of their loans. However, the changes cut the government’s deficit immediately because student loans are included in accounts in the year they are paid out, based on how much the government expects to get back.

The changes will reduce government borrowing by more than £11bn in 2022-3 — almost completely offsetting the £12bn budgeted for relief on rising energy costs, including a 5p cut in fuel duty, an energy bill discount and council tax rebate.

The OBR said the graduate repayments were the “largest fiscal takeaway” of the Spring Statement, and amounted to an “income tax rise for most existing and new students over their working lives”.

The savings, in addition to a fiscal windfall from stronger taxes, give the government “more fiscal room for manoeuvre” to offer energy price support, cut personal taxes and lower borrowing, it added.

The National Union of Students called the decision “calculated cruelness” towards students who were in some cases being forced to choose between heating and eating.

“Instead of addressing these issues . . . the government say that they will be taking an extra £35bn from graduates thanks to their student loan changes over the next five years,” Larissa Kennedy, NUS president, said.

Paul Johnson, director of the Institute for Fiscal Studies, said the changes meant that graduates would be losing more than other groups following the Spring Statement, suffering losses that would compound existing intergenerational inequalities in areas like housing.

“All of these things are broadly pointing in the same direction of helping the older generation at the expense of the younger generation,” he said.