China calls on EU to act independently of US foreign policy 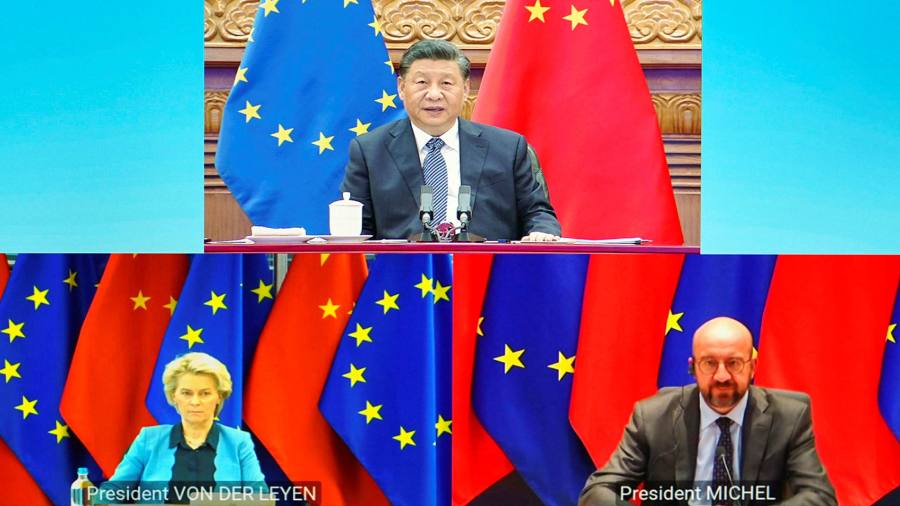 Xi Jinping has called on the EU to act more independently of the US as China and Brussels clashed over Russia’s invasion of Ukraine and the bloc’s leaders warned Beijing not to aid Moscow’s war effort.

China’s president called on the EU “to pursue an independent policy towards China” — a thinly veiled criticism of European solidarity with the US in blaming Russia for the crisis and in hitting Vladimir Putin’s regime with sanctions.

Anything China did that supported Russia’s ability to wage war would do “major reputational damage” to the country in Europe, von der Leyen warned. “China has an influence on Russia and therefore we expect China to take its responsibility” to help bring a peaceful resolution of the conflict, she said.

Xi, however, refused to budge from his position that the US and EU had adopted what Chinese diplomats call a “cold war mentality” over the crisis in Ukraine.

While Xi’s diplomats insist China is a neutral party on Ukraine, they and Chinese state media have repeatedly endorsed Russia’s justifications for the invasion and blamed the US and Nato expansion for stoking conflict.

According to the official Xinhua news agency, Xi said “regional security conflicts” in Europe were the “root cause” of the Ukraine crisis.

Xi “did not condemn, but also did not defend” Putin’s invasion, according to a person present during the video call, adding that the Chinese president ignored a direct question from Michel as to whether he supported the invasion.

Instead, Xi referred to the importance of understanding Russia’s “security concerns in Europe”, the person said.

In a separate video call with the EU duo, Chinese premier Li Keqiang insisted Beijing was working towards a peaceful resolution of the crisis in “its own way”.

In the run-up to Friday’s summit, Wang Yi, China’s foreign minister, told his Russian counterpart “the Ukrainian issue” was the result of “the long-term accumulation of security conflicts in Europe” as well as a “cold war mentality and group confrontation”.

Wang hosted Sergei Lavrov on the sidelines of a regional security meeting about Afghanistan on Wednesday, their first in-person discussion since the war in Ukraine began in late February.

In early February, Xi and Putin said there were “no limits” to their friendship. But analysts say the threat of secondary western sanctions has stopped China from offering significant support to the struggling Russian economy.

“So far, China has not helped Russia offset the cost of sanctions because it doesn’t want to trigger secondary sanctions or become more entangled in the unstable Russian economy,” said Francesca Ghiretti, an EU-China analyst at the Mercator Institute for China Studies, a German think-tank.

“Beijing wants to avoid any more economic pain on top of the pandemic lockdowns and global inflationary pressures,” she added.

China’s trade with the EU was worth €1.9bn a day, compared with €330mn daily with Russia, von der Leyen said, suggesting Beijing’s attitude to the war could threaten that flow. Ukraine was a “defining moment for our relationship with the rest of the world”, she said.