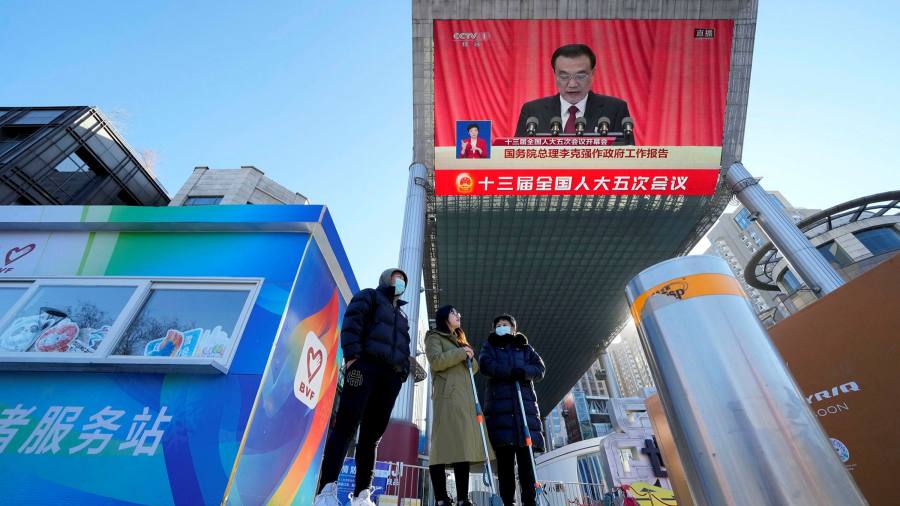 China unveiled a growth target of about 5.5 per cent, its lowest in three decades, as Beijing seeks to buttress its economy after a sharp loss of momentum in 2021 and fallout from Russia’s invasion of Ukraine.

The target reflects lower growth expectations in 2022 compared with pre-pandemic rates as Beijing maintains its strict Covid measures, enforces its “common prosperity” policy to reduce inequality and boost the Communist party’s control over business, and contends with a debt-fuelled real estate crisis.

Premier Li Keqiang announced the target at the opening of the National People’s Congress, China’s annual meeting of its rubber stamp parliament in Beijing. It follows year-on-year growth of just 4 per cent in the fourth quarter of 2021 and he stressed that “achieving this goal will require arduous efforts”.

Li did not directly mention Ukraine but said “evolving dynamics at home and abroad indicates that this year our country will encounter many more risks and challenges”.

The budget included a sharp increase in defence spending, which rose 7.1 per cent to Rmb1.45tn ($229bn) — its fastest pace in three years — as China accelerates the modernisation of its armed forces and the US strengthens its military presence in the Asia-Pacific.

Beijing’s growth target was higher than forecasts released before the outbreak of the Ukraine war, which is expected to drag on global growth and sting Chinese exporters.

Bert Hofman, director of the East Asian Institute at the National University of Singapore, said the GDP target was a “surprise” given the external challenges and “quite high, under the circumstances”.

“Now we have Ukraine, which will affect China. It’s hard to say how exactly. But China is a major commodities importer, there is a terms of trade effect that will take away resources from businesses and people, so they will have less to spend on domestic goods,” said Hofman, a former China country director for the World Bank.

Li’s announcement was the first time since 1991 that the gross domestic product target has been set below 6 per cent, even though the Chinese economy has outperformed much of Asia in recovering from the pandemic.

Economic stability is paramount in China ahead of a historic party congress in the autumn at which Xi Jinping, the country’s most powerful leader since Mao, is expected to begin an unprecedented third term as president.

China targeted GDP growth of more than 6 per cent and recorded 8.1 per cent last year, owing to the weak performance in 2020 when much of the country was under lockdown for months.

The world’s second-biggest economy bounced back from the early impact of the pandemic, supported by its industrial engine and strong exports. But it has struggled to maintain momentum, with the property sector under severe distress and consumer spending remaining sluggish.

Raymond Yeung, chief economist for greater China at ANZ, said Beijing’s focus is shifting to “execution” of easing and credit expansion after signalling fiscal and monetary policy would be relaxed late last year.

“It is not about whether the PBoC is easing. The question is how to translate this easing . . . down to the level of the banking system and to benefit the market and corporates,” Yeung said.

Stability will be tested this year as Beijing continues to deleverage China’s property sector, which accounts for about a third of economic activity but has been hit by a series of defaults among developers.

Li also did not signal any relaxation of China’s coronavirus control policies.

Beijing declined to set a growth target in 2020 as its economy underwent a historic contraction in the early stages of the coronavirus pandemic.

Some experts warn that Beijing will need to undertake fundamental reforms to overcome systematic risks from high levels of local government and property debt, as well as its ageing society.

“This is a balancing act. China knows that they cannot rely on infrastructure investment or property investment forever,” said Yeung. “It’s the shifting of the growth model that matters more than anything.”

Ben Simpfendorfer, a partner at consultancy Oliver Wyman, added that “counter-cyclical policy can only do so much”.

“What’s needed is more structural economic reform and a lower target will provide that breathing space,” he said.