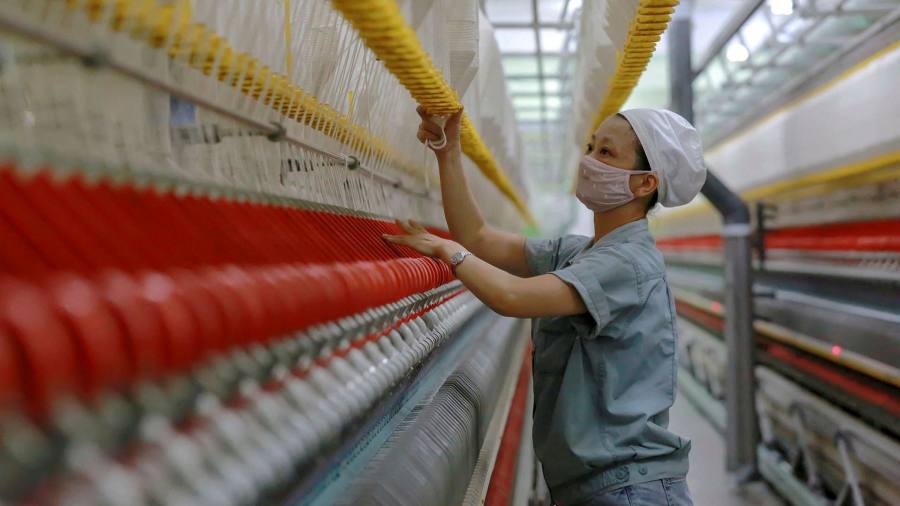 In 2020 and 2021, when the coronavirus pandemic forced much of the world’s population to spend more time at home, Chinese exports of laptops grew by double digits.

The boom was one example of how China’s economy benefited from shifting global demand as governments around the world imposed Covid-19 restrictions, crippling spending on restaurants, travel and other services and encouraging purchases of goods.

But this year, China’s shipments of laptops have slumped 16 per cent year on year, reflecting a trend of weakening growth in its exports, which may now even be on course to decline.

Amid the easing of Covid measures around the world and supply chain disruption from domestic lockdowns, Chinese exports grew just 3.9 per cent in April in dollar terms. It was their weakest level since July 2020.

The trend is part of a sweeping reversal of fortunes for China’s wider economy, which bounced back from the initial shock of the pandemic to outperform the rest of the world in 2020 but is now grappling with the lockdowns in Shanghai and other cities and a property sector crisis.

China has set a 5.5 per cent target for GDP expansion this year, the lowest in three decades, but Premier Li Keqiang told officials last week it could struggle to achieve positive growth at all in the current quarter.

“Given the big shock the economy’s just been through plus the headwinds on the export side, I think it’s quite challenging just to get positive growth at all this year,” said Julian Evans-Pritchard, China economist at Capital Economics who expects “quite a significant outright decline in export volumes”.

Evans-Pritchard estimated that exports accounted for almost half of China’s 18.3 per cent year-on-year gross domestic product expansion in the first quarter of 2021, but expected it to make a negative contribution to growth from the third quarter of this year onwards.

The export slowdown has removed a source of support for the economy that Chinese policymakers have relied on throughout the pandemic. It has also come just as zero-Covid policies are causing rising unemployment and a collapse of activity in many cities.

Lu estimated that about 80mn people worked in China’s export sector in 2020, meaning a single percentage point decline in its activity could impact hundreds of thousands of jobs.

Meanwhile, from January to April this year, furniture exports rose just 2 per cent, after soaring 70 per cent in the same period of 2021.

Data from other major economies also point to shifting consumer behaviour. In the UK in March last year, real output in the recreation and entertainment sectors was still down by a quarter against a year earlier, while accommodation and food services were down 62 per cent, according to data from the Office for National Statistics.

However, by March this year, both sectors had rebounded to pre-pandemic levels following the easing of Covid restrictions.

Similarly in the eurozone, inflation-adjusted retail sales, which mainly reflect purchases of goods rather than services, peaked at 6 per cent above pre-pandemic levels in November last year and have fallen since.

Data on spending on services is not available for the eurozone as a whole, but Eurostat data for certain countries point to a pivot in spending from goods to services. In Italy, spending on restaurants and hotels grew by an annual rate of 23 per cent in value terms last year, nearly 6 times faster than spending on food and non-alcoholic beverages.

Lockdowns in Shanghai and other Chinese cities have caused serious supply chain problems for exporters. But Louis Kuijs, chief Asia economist at S&P Global Ratings, said export challenges were not limited to China.

“After the huge bounce in exports [in] much of 2020 [and] 2021, we should expect to see global demand slowing this year,” he said. “That’s true for China, it’s also true for other countries — the other exporting powerhouses like Taiwan and South Korea are facing the same problem.”

Meanwhile, the global backdrop of higher inflation might have masked the extent of the hit to Chinese exports, Kuijs said.

“If you look at export numbers in US dollar terms they are still quite good, but a large part of that is price increases,” he said.

Lu at Nomura said the lockdowns in Shanghai and other cities would put Chinese suppliers at a disadvantage to international rivals.

“Manufacturing in other parts of the world will return to normal, so China’s exports will be faced with more competition,” Lu said, adding that the restrictions would prompt buyers of Chinese exports to shift some orders elsewhere. “I don’t know the scale, but I believe it’s happening”.