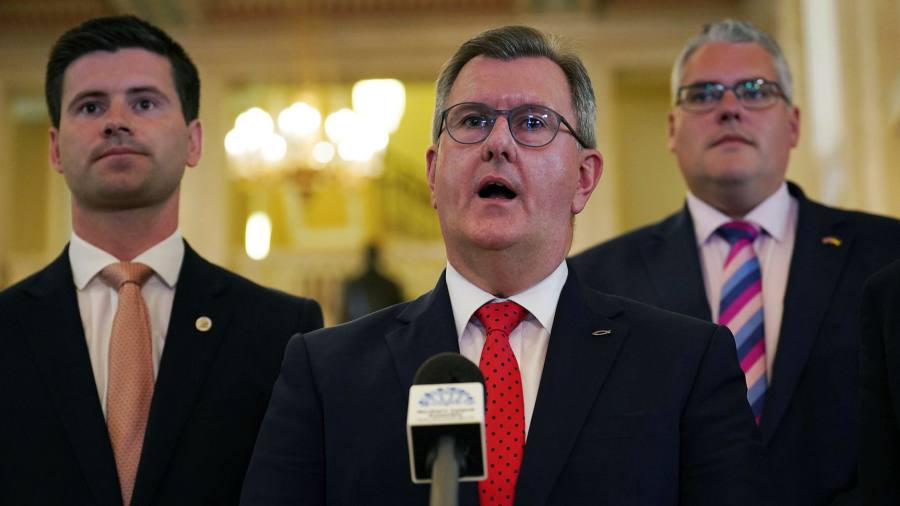 Northern Ireland’s largest unionist party has blocked the appointment of a speaker at the Stormont assembly for the second time since regional elections this month to press its demands for sweeping changes to the region’s post-Brexit trading arrangements.

Legislators were recalled to Stormont after a successful petition from Sinn Féin, the largest party. But the Democratic Unionist party failed to support the election of a speaker, as it had done on May 13, ensuring local politics remained paralysed.

Unless a speaker is elected, the power-sharing executive, which will be led by a Sinn Féin first minister and a DUP deputy first minister, cannot take office. That, in turn, freezes much significant assembly business, including a three-year budget, hampering efforts to help people hurt by the cost of living crisis.

Brandon Lewis, UK secretary of state for Northern Ireland, appealed before the vote for “all parties to use this opportunity . . . to move forward”.

“We will be back again, we will do this again,” Michelle O’Neill, first minister-in-waiting, said after the failure to elect a speaker. “I’m not giving up.”

The DUP dismissed the recall motion as a “stunt” and maintained that its hardball tactics were pushing the UK government into resolving problems with the trading arrangements that are opposed by all unionist parties, who say they undermine the region’s place as part of the UK.

The DUP is demanding unspecified “decisive action” over the so-called Northern Ireland protocol, which imposes post-Brexit checks on goods travelling between Great Britain and Northern Ireland, before it will consider returning to local institutions. A majority of elected legislators, however, support the protocol, with tweaks.

Liz Truss, UK foreign secretary, says the protocol must be fixed and has pledged to present a bill within weeks giving the government powers to rip up parts of it unilaterally unless Brussels agrees to fundamental changes.

That has raised the prospect of a trade war with the EU, which already believes it has bent over backwards to make the protocol more flexible.

Because Brexit left Northern Ireland inside the EU’s single market for goods, the protocol introduced customs checks for goods entering from Britain as they could cross into the Republic of Ireland and the wider EU.

Truss wants such checks replaced by a “green lane” for goods destined to stay in Northern Ireland, among other changes.

DUP leader Sir Jeffrey Donaldson has hinted that he might take a gradual approach to reviving Northern Ireland’s institutions, raising the prospect that the DUP could support the election of a speaker once the UK legislation is tabled.

“When the time is right, we will support the election of a speaker,” he said on Saturday ahead of a parade called by the Orange Order to celebrate Northern Ireland’s centenary last year.

But the DUP has been let down repeatedly by the UK government and has made clear it will need to see results before it returns to the executive.