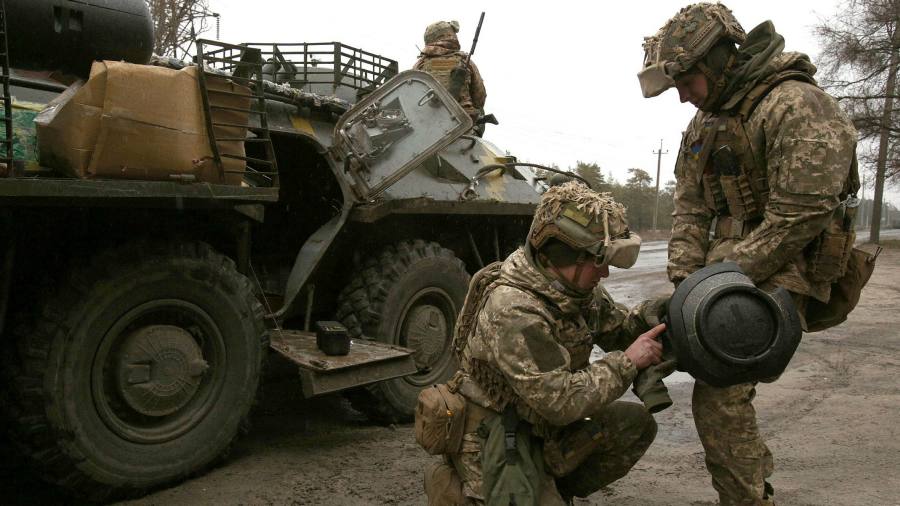 Volodymyr Zelensky’s response was unequivocal. Offered evacuation by the US from Kyiv on Friday, he replied: “I need ammunition, not a ride.”

That evening at a crisis summit of Nato leaders, dozens of western countries declared they would give the Ukrainian president what he had asked for to support his country’s resistance against Russia’s invasion.

The US pledged $350mn of military aid, in addition to the $650mn it has committed over the past year. By Saturday evening, even Germany had reversed its historic position of never sending weapons to conflict zones.

But promising aid is one thing, western defence sources and analysts caution. The challenge is to deliver it to Ukraine’s armed forces fast enough, or to a resistance movement should the Zelensky administration fall.

“The political rhetoric of support for a resistance is easy, delivering it in practice is harder,” said John Raine, senior adviser for geopolitical due diligence at the International Institute for Strategic Studies, in London.

“It requires investing in the legal and political structures needed to sustain it, and the supply chain logistics that actually dock the military aid with the resistance forces that will use it.”

The first challenge is to ensure deliveries are of appropriate military equipment that augments existing capacity and requires little training.

It is one thing to accept refugees . . . but it is another thing to shift weapons clandestinely across a border at night

“Ukraine’s forces will be using between four and 10 times what they would expect to use from exercises, and the less well-trained may be using more still,” he added.

Getting the supplies to Ukrainian forces is also a challenge. In the lead-up to Russia’s attack on Thursday, Nato allies could deliver equipment by air or land, direct to military depots. But Ukraine’s skies are now dominated by Russian fighter jets, and Nato allies have said they will not provide air cover as that would effectively mean declaring war on Moscow. Many Ukrainian airfields have also been rendered unusable by missile strikes.

As a result, future deliveries will have to move in more covert conveys through contested territory, most likely from Poland which shares a 535km border with Ukraine and has been the main destination for the Nato troops deployed to its eastern flank this year.

On Saturday, there were reports that airborne Russian forces had landed in western Ukraine, potentially complicating deliveries further.

“Nothing has been cut off by the Russian advance,” a senior western intelligence official said. “There’s a broad range of . . . political and military assistance that can still be provided.”

There are some simple guidelines such aid convoys will probably follow, defence sources say. Trucks will need to avoid moving in bumper to bumper convoys and travel at a variable pace so they are harder to track and attack, and carry air defence weapons such as Stinger missiles and multi-barrel machine guns to deter Russian jets.

“The important thing is guard the handovers, get the supplies to the right place and then disperse them. You can’t just deposit in a depot,” said the defence source. “It’s complex but not difficult.”

Such operations become harder if field units are encircled — as may soon happen to Ukrainian troops fighting in the east of the country.

“Ukraine’s tactical units started the conflict with 10 days of munitions and that will now have been reduced,” said Jack Watling, research fellow at the Royal United Services Institute in London. “There is more in stockpiles but it has to be moved out to operational units . . . tricky if they are being surrounded.”

For now, supply convoys are getting through. Russia may also have to divert units to try to intercept deliveries, although on Sunday a senior US defence official said there were no indications that had happened yet.

But the challenges rise if Kyiv is taken, the Zelensky administration falls and Ukraine’s army and territorial reserve fragment into a mosaic of resistance forces, armed militias and civil movements.

“Nato only works with governments,” another western intelligence official said.

Weapons might also fall into Russian hands and be turned against the resistance. Poland, although it recently signed a tripartite security agreement with Ukraine and the UK, might balk at remaining a base for supplies in such a confusing scenario.

“It is one thing to accept refugees, as Poland is so commendably doing now,” said a senior former western intelligence official. “But it is another thing to shift weapons clandestinely across a border at night — an action Russia might view as a casus belli.”

Western experience of supporting rebel movements — be that in Central America or Afghanistan in the 1980s, or Syria in this century — has been fraught with legal, political and ethical controversy. The one country that has made it a central tenet of its military strategy is Iran, which has cultivated and sustained a network of allies across the Middle East, analysts said.

Nor is there any recent precedent of western countries supporting the resistance movement of an internationally recognised government in exile. The last time that happened, analysts say, was during the second world war, when Charles de Gaulle rallied the French resistance from London.

“If the government falls, Zelensky will need to escape Kyiv for Lviv or Poland,” said the defence source. “There is a large and rich Ukrainian diaspora that can provide support. He represents hope, and the promise that Ukraine will return. It’s important that he survives.”