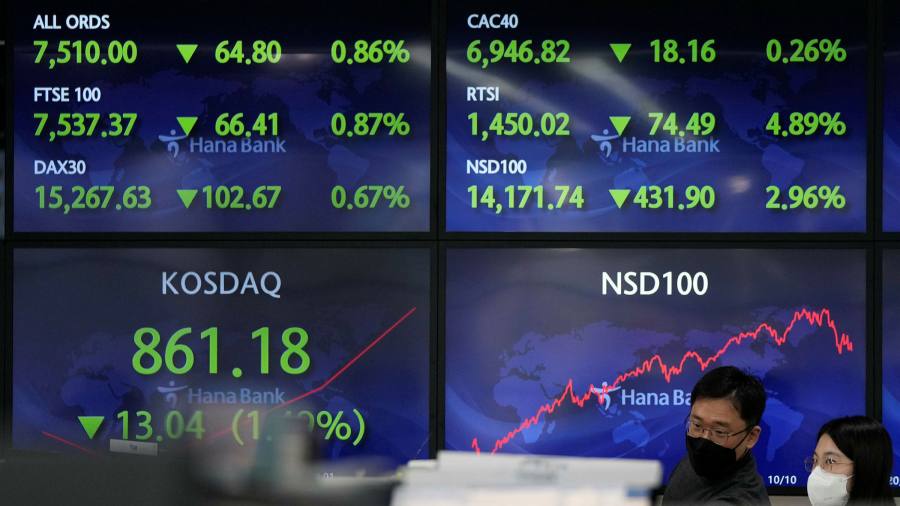 The regional Stoxx Europe 600 share gauge fell as much as 1.9 per cent in the early afternoon and closed the session 1.3 per cent lower.

The meeting of the national security council came as Russia claimed on Monday that it had destroyed two Ukrainian military vehicles that strayed into its territory, killing five people. The unconfirmed incident would be the first direct clash with Ukrainian forces since Moscow mobilised 190,000 troops on its border.

Dmytro Kuleba, Ukraine’s foreign minister, denied that the country’s troops made an incursion into Russia. “Russia, stop your fake-producing factory now,” he said in a tweet.

US president Joe Biden and Russian leader Vladimir Putin had earlier accepted “the principle” of a possible summit to ease tensions over Ukraine.

The Kremlin on Monday then said there were “no concrete plans” for such a meeting, but did not rule out the option.

In Russia, the Moex share index declined by more than a tenth, marking its worst single-day fall since Russia seized control of Crimea in 2014. The rouble lost 1.3 per cent against the dollar.

Investors have become increasingly cautious about how to respond to the flow of news concerning Russia’s intentions over Ukraine, with bad news causing sharp equity market sell-offs while relief rallies have been moderate and short lived.

The FTSE All World share index has fallen for six of the past eight sessions and has lost 2.2 per cent so far this month. Meanwhile, the price of spot gold, which dipped 0.1 per cent to $1,896 a troy ounce on Monday, has gained about 5 per cent since the end of January.

“Since last week, every market top is getting lower and lower and institutional money is getting cold feet,” said Florian Ielpo, head of macro at Lombard Odier Investment Managers.

“Every bit of news we are getting [about Ukraine] is more confusing,” he added, while overall, “the market is preparing itself for a bad moment”.

On Sunday, French president Emmanuel Macron spoke to Russia’s president in two lengthy phone calls, in what a French official described as “part of the last possible and necessary efforts to avoid a major conflict”.

Moscow has massed as many as 190,000 troops on Ukraine’s borders despite previously pledging they would return to Russia. Belarus, meanwhile, said over the weekend that 30,000 Russian troops participating in joint drills would stay indefinitely.

Currency and government bond markets started Monday’s session pricing in some cautious optimism about a diplomatic resolution to the Ukraine stand-off, before the mood became more subdued.

The yield on Germany’s 10-year Bund, which moves inversely to its price, was steady at 0.2 per cent.

Brent crude rose 1.9 per cent to $95.27 a barrel. Oil prices had recently touched a seven-year high over concerns of an imminent Russian invasion of Ukraine.

“The market was already fragile from a sentiment perspective,” said Jeremy Gatto, multi-asset fund manager at Unigestion, referring to the US, UK and eurozone central banks tightening monetary policy.

The Russia-Ukraine situation, he said made it “very difficult to trade”, with new headlines about the crisis “coming out every five minutes”, and the overall feeling that “the chance of an escalation is growing”.

US stock and bonds markets were closed for a public holiday.