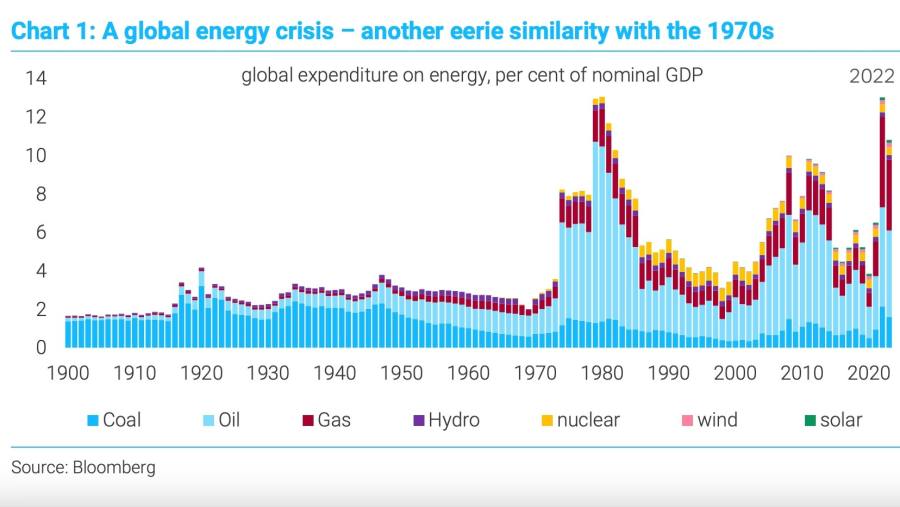 Perkins estimates that the cost of governments trying to soften the economic hit from spiralling energy prices could cost “at least” 5 per cent of gross domestic product. If that bill seems steep to some governments, the alternative is worse, Perkins argues. Our emphasis below.

Inevitably, governments are under enormous pressure to support their economies through this difficult period. They have already announced various fiscal interventions, including liquidity provisions (for utilities companies facing extreme margin calls), income transfers, and even “price caps” on energy. The eventual bill for the public finances could be huge, with a successful intervention likely to cost at least 5% of GDP per annum (depending on what happens to energy prices). But Europe’s politicians have no alternative, especially as — unlike central bankers — they will eventually be seeking re-election. Many low-income households are facing real poverty this winter, while rapidly rising input prices are set to destroy the profitability of European companies (especially the region’s SMEs, which already operate on relatively thin margins). Unless governments act swiftly and decisively, they could find themselves facing an economic crisis similar to the one they successfully dodged during the pandemic: enormous strains on corporate balance sheets, which trigger a wave of bankruptcies and a sharp increase in unemployment. In short, another COVID-style economic crisis demands a COVID-sized policy response.

The problem, as Perkins points out, is that all central banks currently seem to see is uncomfortably high inflation. Although the European Central Bank is not acting as aggressively as the Federal Reserve, the direction of travel is pretty clear.

So there is currently a tug of war between European governments opening the fiscal spigots in various ways to soften the hit from higher energy costs — what Perkins calls “The Everybody Bailout” — and monetary policy that is essentially trying to gently but firmly choke economic growth.

As Perkins notes, this is pretty much a complete reversal of policy over the past decade, when monetary policy was historically easy and fiscal policy was arguably much tighter than it should have been. The question is where this leads.

Naturally, a large fiscal expansion runs directly against the philosophy of Europe’s monetary guardians. Governments are, in effect, trying to shield the economy from an adjustment that central banks say is inevitable. But is the public sector’s response to the energy crunch necessarily inflationary?

The answer depends on the persistence of the shock. If energy prices quickly return to their pre-2022 levels — or governments withdraw their support quickly — governments will have delivered a one-off increase in public debt, which is not likely to generate persistent inflation. Problems arise, however, if the energy crisis lingers. Wholesale energy prices could remain high in 2023 and possibly beyond, which would make it extremely hard for governments to reduce their support to households and businesses.

Instead, the public sector would be under enormous pressure to continue to subsidize private living standards, leading to large, persistent deficits and higher medium-term inflation. Throw in periodic energy blackouts and sectoral lockdowns and we could face another COVID-style dynamic, where governments are simultaneously supporting incomes and restricting supply. Central banks would not be happy, especially as the longer inflation stays high, the greater the risk of “de-anchoring” expectations.