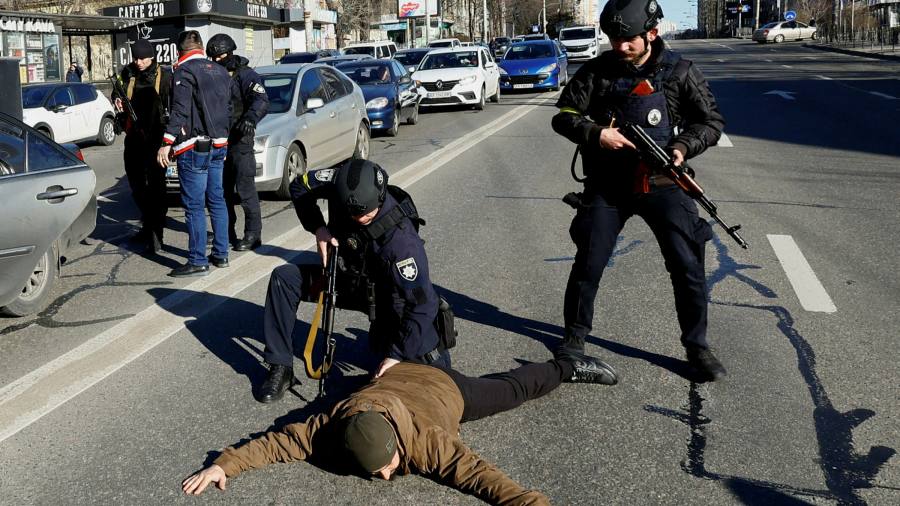 Russia’s central bank has more than doubled interest rates to support a plunging rouble as the economic impact of President Vladimir Putin’s invasion of Ukraine hit the Russian economy.

In an emergency move, the Russian central bank increased interest rates to 20 per cent from 9.5 per cent as the currency lost nearly a third of its value against the dollar following the announcement of unprecedented sanctions on Russia’s banking system.

The central bank also banned foreigners from selling local securities and pushed back trading on the Moscow stock exchange as fears of financial chaos in Russia spread.

The Kremlin conceded that the economic reality in Russia had “significantly changed” following the sharp fall in the rouble’s value and the rise in interest rates. Putin has called for an emergency meeting with his economic advisers later today in response to Russia’s growing financial crisis.

Over the weekend queues formed at Russia’s empty cash machines as savers feared a collapse of the rouble and worried they would be unable to access the international payments system.

Follow the latest developments on our live blog and track the conflict in maps. We also have an explainer detailing how western sanctions could hobble the Russian economy and our editorial board argues that Putin’s war looks ever more like a miscalculation that could make him more dangerous.

Thanks for reading FirstFT Americas. To keep up to date with all that’s happening in Ukraine, sign up here to receive my colleague Valentina Pop’s essential newsletter, Europe Express — Gordon

1. World’s largest SWF to vote against Apple’s pay policies Norway’s oil fund will vote against the iPhone maker’s pay policies, as well as shareholder proposals on transparency, forced labour, a civil rights audit and sustainability disclosures, according to its voting intention.

2. Buffett bemoans few good deals Warren Buffett lamented the lack of attractive investments available to his sprawling $713bn Berkshire Hathaway conglomerate over the weekend. In his annual letter to investors, Buffett wrote that low interest rates had inflated valuations across financial markets and that he and partner Charlie Munger had found “little that excites us”.

4. Fried Frank poaches 35 legal staff from rival Cadwalader Fried Frank, the US law firm, has poached a team of financial services lawyers from its rival Cadwalader, Wickersham & Taft, as fierce competition for lawyers rages across the industry.

UN summits The UN General Assembly, which comprises all members, will hold an emergency session over Russia’s invasion of Ukraine. The UN Human Rights Council kicks off its 49th session in Geneva, with French foreign minister Jean-Yves Le Drian due to speak on security concerns, and Kenya hosts the fifth session of the UN Environment Assembly.

Emmanuel Macron to announce re-election campaign The French president is expected to announce his candidacy for re-election. The FT is tracking national opinion polls in the run-up to the first round of voting in April.

Is fertility a topic for the workplace? When Raina Brands posted updates to her CV on Twitter last year, the focus for the UCL associate professor was not professional but personal: “recurrent pregnancy loss” (2019-20) and the birth of her son (2021). “I believe it is time to update #academic CVs to be inclusive of women’s whole lives,” she wrote.

Donald Trump’s accounts may hold him to account The former US president must be feeling more than usually unassailable, after seeing off two impeachments and a special counsel investigation. But despite his love of bombast, Trump’s legal woes are far from over, writes our editorial board.

The race to a post-dollar world Russia’s invasion of Ukraine is a critical turning point that will have lasting economic consequences. Among them will be a quickening shift to a bipolar global financial system, one based on the dollar and the other on the renminbi, writes Rana Foroohar.

How a Brazilian crime syndicate built a global drug empire Founded as a prison brotherhood 30 years ago in São Paulo, the Primeiro Comando da Capital, or First Capital Command, has evolved into a multinational mafia, with a revenue stream that generates upwards of $500mn every year, according to state prosecutors. Here’s how they did it.

Cancer, Covid and me Miranda Green’s cancer diagnosis coincided with the start of the Covid emergency, leading to the postponement of her treatment. “So began the most surreal and extreme period of my life,” she writes.

As Covid restrictions wound down in the UK, designers returned to the catwalk with novel ideas for shows. More than a few of the 37 brands that returned to in-person shows in London this season displayed an urge to do something more considered and memorable.

Thank you for reading and remember you can add FirstFT to myFT. You can also elect to receive a FirstFT push notification every morning on the app. For more of the Financial Times, follow us on Twitter @financialtimes.

FT Asset Management — The inside story on the movers and shakers behind a multitrillion-dollar industry. Sign up here.

The Week Ahead — Start every week with a preview of what’s on the agenda. Sign up here.