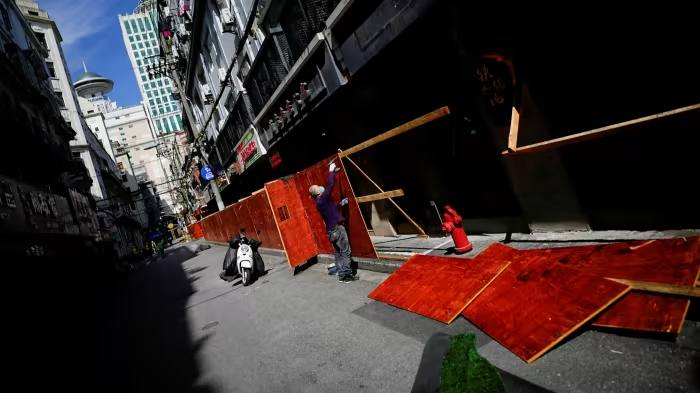 Shanghai is set for the most significant easing of Covid-19 restrictions since it was sealed off more than two months ago, after authorities said public transport would resume and shops reopen from today.

Officials unveiled the changes, which eliminate the need for residents of low-risk housing compounds to gain approval to leave their homes, ahead of a June 1 deadline that paves the way for a gradual reopening across a city where restrictions are still widespread.

Barriers designed to keep people inside their buildings were dismantled this week and citizens returned in small numbers to streets that were recently deserted as part of the most notable lockdown in China since the closure of Wuhan in 2020.

The easing signalled a shift in tone for the country’s biggest city, which has come to embody the government’s nationwide recommitment to zero-Covid policies despite their mounting social and economic costs.

This interactive feature explores the impact Beijing’s zero-Covid strategy has had on China’s economy and its society.

Meanwhile, in Hong Kong, city officials have escaped the quarantine that continues to batters the city’s reputation.

Do you live in Shanghai? What are you most looking forward to doing now that restrictions have eased? Tell me at [email protected]. Thanks for reading FirstFT Asia. — Emily

1. Russian oil cargoes take a hit The UK and EU have agreed a co-ordinated ban on insuring ships carrying Russian oil, shutting Moscow out of the vital Lloyd’s of London insurance market and sharply curbing its ability to export crude, according to British and European officials. After leaders agreed on Monday night to impose a ban on Russian seaborne oil imports, Brussels has said it is willing to propose tariffs if any EU member states refuse to implement the embargo.

2. Eurozone inflation hits record 8.1% Eurozone inflation soared to a new record high of 8.1 per cent in the year to May, piling pressure on the European Central Bank to speed up the pace of its exit from ultra-loose monetary policy. The jump in eurozone price growth, from 7.4 per cent in April, was much higher than forecast by economists, who had expected 7.7 per cent, according to a Reuters poll.

3. Executives ‘buy the dip’ at rate not seen since start of pandemic Between the start of the month and May 24, insider share buying at S&P 500 companies has been the strongest since March 2020, according to figures from VerityData. The datapoint could be an encouraging sign for the US stock market, some Wall Street analysts said.

How has global market volatility affected your investment decisions? Tell us in our latest poll below.

4. German police raid DWS and Deutsche Bank over greenwashing claims Approximately 50 police officers arrived at the DWS premises and Deutsche Bank’s twin towers in downtown Frankfurt mid-morning and held meetings with staff until lunchtime, according to people with knowledge of the operation. Neither company was given advance notice of the raid.

5. FWD delays $1bn Hong Kong IPO on market volatility The insurance group has delayed its $1bn Hong Kong initial public offering owing to volatile market conditions, according to people familiar with the matter, the latest in a string of listings setbacks for the insurer founded by property tycoon Li Ka-shing’s son.

PMI data S&P/Caixan is set to publish manufacturing purchasing managers’ index for China, Eurozone, France, Germany, Italy, the UK and the US.

What else we’re reading and watching

Martin Wolf on the state of the world How do we make sense of the world? Time spent in Davos last week crystallised Martin’s answers in the form of these 12 propositions covering the top economic, geopolitical, social and technological issues facing society.

Can augmented reality take off where VR has failed? It’s been a decade since virtual reality re-entered the lexicon, but the technology has largely failed to break out into the normal world. Nevertheless, Silicon Valley is gearing up for another attempt to convince us that the future of computing is on our faces.

Sifting through the stock market wreckage Look beyond the debate about growth versus value to focus on stock picking, writes Maike Currie. Some argue that the real story playing out in markets is not about value versus growth, but rather between cyclicals and defensives.

The border-defying winner of the International Booker Tomb of Sand, which tells the story of an octogenarian woman’s border crossing from India to Pakistanan, is a triumph of literature, writes Nilanjana Roy. But it is also a balm and solace to anyone whose life has been scarred by a border that became a forbidding wall.

The rich world’s fertility problem Rich nations can produce more of everything they need — except people. For a stable population, the average family needs to have 2.1 children: two to replace them, with “0.1” on top to make up for the people who won’t. But if wealthy states cannot increase their birth rates, they can attract migrants.

With slick looks recalling an espresso machine, Petlibro’s Granary WiFi feeder allows you to maintain the strict dining regimen you have established for your furry friend while jetting off for the weekend. It is one of five new gadgets to help you take care of your pet.

Thank you for reading and remember you can add FirstFT to myFT. You can also elect to receive a FirstFT push notification every morning on the app. Send your recommendations and feedback to [email protected] Sign up here.